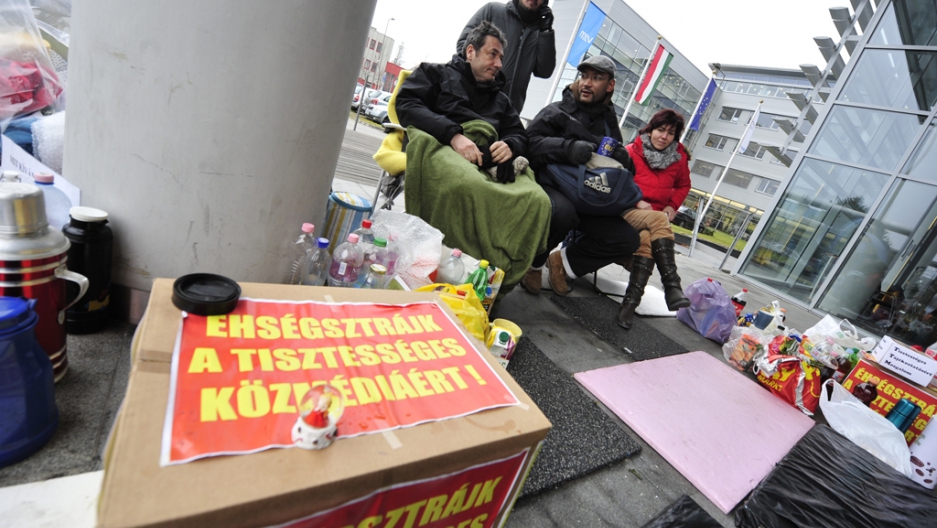 Four Hungarian journalists of the state public television protest in front of the headquarters of Hungarian Television Foundation in Budapest during their hunger strike against the news manipulation of MTVA. Sign on the box reads "Hunger strike for the honesty public media."
Credit: Attila Kisbenedek
Share

Two Hungarian journalists were fired for participating in a hunger strike to protest the government's involvement in the media.

According to the Associated Press, the fired journalists, Balazs Nagy Navarro and Aranka Szavuly, have been participating in a hunger strike since Dec. 10, along with three other protesters.

They have been living on nothing but tea and soup.

According to the station for which they work, Media Service Support and Asset Management Fund (MTVA), Navarro and Szavuly were fired because the fast is illegal and a “provocation” of their employer.

Navarro told the AP that their firings were “shameful and trample on legal security.”

The journalists began the hunger strike because they believe there has been a "gross interference by pro-government editors in their work," BBC News reported.

They demanded the firing of five television editors who are believed to be interfering in the politics of daily news programs.

Although one of the editors, Gabor Elo, was fired before Christmas, Navarro insists that the others must leave too.

Elo was blamed for editing out the face of a former head of the Supreme Court, Zoltan Lomnici, from a news report on Dec. 3.

The hunger strike is seen as part of a wider protest against the government's media policy, the BBC reported.

Last year, the main anti-government radio station known as Klub Radio, lost "its bid to renew its 95.3 FM wavelength, which it has used for the past 10 years," according to the BBC.

The loss of Klub Radio even prompted US Secretary of State Hillary Clinton to write a letter to Hungarian Prime Minister Viktor Orban on Dec. 23 about several questionable aspects of the government's media policy.

"During a visit to Hungary last June," reported the BBC, "Clinton called for 'a real commitment to the independence of the judiciary, free press and governmental transparency.'"

Karola Kiricsi, a spokeswoman for the Media Council, has told reporters that Klub Radio lost its bid because of financial reasons and attacks from critics and international media organizations against the Media Council were "a political provocation."