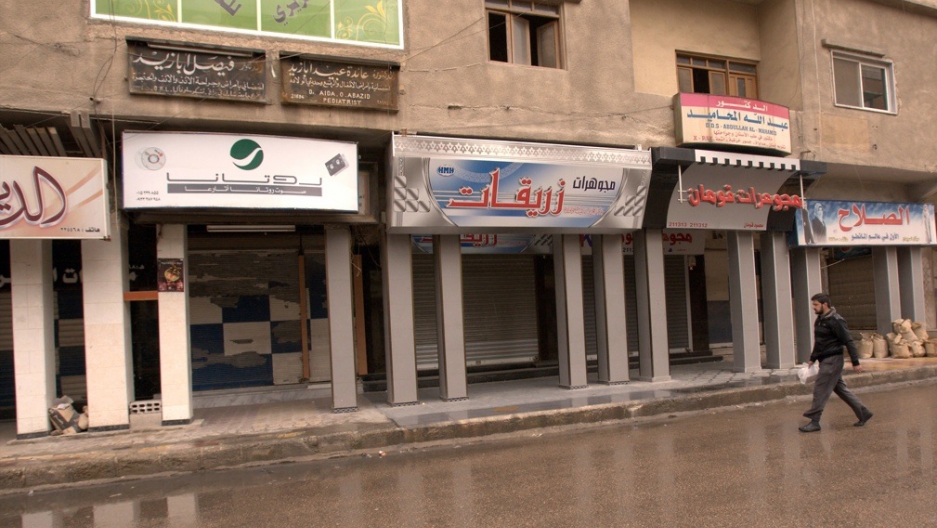 A man walks past closed shops in the southern Syrian city of Daraa on March 24, 2011.
Credit: Anwar Amro
Share

BEIRUT, Lebanon — With Damascus reeling from twin suicide bombings apparently timed to coincide with the arrival of an Arab League observer mission, and as fighting rages between Syrian security forces and the armed resistance, Syria’s peaceful opposition is struggling to make its voice heard through a campaign of civil disobedience.

“We are ready to lose some money to gain a free country,” a 60-year-old furniture seller from Saqba, one of the capital’s restive satellite towns, told GlobalPost. “We decided to close all shops and to boycott anyone who opens his shop except pharmacies, doctors’ clinics and groceries that sell food.”

The man, who asked to be known only as Abu Omar, said secret police and thugs had attacked and burned some of the closed shops in Saqba during the first three days of the strike, which began on Dec. 12. He said that in the first week, electricity, phone lines and municipal water in the town had all been cut.

“The government wants to punish us. But we will not open our shops. What more can they do? They kill, shoot and arrest us every day. After nine months, we are used to living in these conditions,” Abu Omar said.

The opposition Local Coordination Committees (LCC), the leading grassroots opposition movement, said closing shops was only the first in an ambitious six-step campaign of civil disobedience.

The plan includes school and university students refusing to attend classes, a strike by transport workers, the closure of major roads between cities and, eventually, the closure of all Syria’s international highways.

The LCC said the campaign would also encourage Syrians to turn off their mobile phones for four hours every afternoon, directly targeting President Bashar al-Assad’s cousin, Rami Makhlouf, the wealthiest businessman in the country and owner of SyriaTel, the leading mobile phone company.

Eventually, after efforts to have workers turn up to their job but refuse to perform any tasks, the planned civil-disobedience campaign aims to encourage state- sector employees to refuse to work.

Many of the tactics are similar to those outlined by the world’s leading expert on nonviolent revolution, Professor Gene Sharp, whose book on transforming dictatorships into democracies has been read by revolutionaries from the Balkans to Cairo.

More from GlobalPost: Syria's revolution, according to Gene Sharp

On a recent tour of satellite towns northeast of Damascus, including protest centers Douma, Harasta and Arbeen, a GlobalPost reporter estimated that some 70 percent of all businesses were closed.

Pharmacies, fruit markets and grocers were open and several placards signed by the Free Syrian Army, the armed opposition of defected soldiers and civilian volunteers, threatened punishment for any business opening in defiance of the strike.

Streets were largely deserted, except for secret police and thugs touring in pick-up trucks and checkpoints manned by dozens of soldiers and security personnel.

The strike was also observed in key protest regions across Syria. In Idleb, in the northwest — an area that has seen heavy clashes between the Free Syrian Army and Assad’s loyalist troops — an activist contacted by phone said shops in the city and surrounding towns had closed.

“The strike doesn’t affect our lives because we already don’t have goods in our shops,” said Abdo, a 22-year-old activist. “The regime is punishing us by preventing all our basic needs in Idleb. We don’t have electricity, heating oil and cooking gas.”

With EU sanctions on Syria’s oil exports beginning to bite, residents of Damascus have reported similar shortages of cooking gas and heating oil apparently being targeted by authorities to neighborhoods of anti-regime protests, such as Midan.

More from GlobalPost: Can sanctions get Assad's attention?

Abdo said many students in Idleb had stopped going to school and were instead on the streets calling for the downfall of the 41-year-old Assad family dictatorship.

“We are planning to close the international roads which link Aleppo with Damascus, Lattakia with Aleppo, and Idleb with Turkey in the near future,” he said. “We will do everything that hurts the Assad regime.”

In the far south of Syria, 70 to 80 percent of businesses in the border province of Daraa were also observing a general strike a week into it, according to Qassem, a 30-year-old member of the Daraa LCC.

“The regime’s media says American, European and Arab sanctions are responsible for the people’s suffering, such as shortages of oil products and inflation. We are explaining to ordinary people that the Assad regime is responsible, not the sanctions,” he said.

More from GlobalPost: In Daraa, where it all began

Qassem acknowledged citizens were suffering further hardships because of the strikes, but said he believed people were ready to pay the price to achieve freedom.

“The next steps are boycotting schools, universities, government jobs and then ceasing to pay taxes and bills to the government,” he said.

In the souks of central Damascus, though, it was a very different scene.

In the ancient covered market of Hamadiyeh and the famous Straight Street, though customers were few and far between, barely a single shop was closed, a clear indicator of the passive support the Assad regime still enjoys from large swaths of the middle class in the capital and a hurdle the opposition has yet to overcome.

“The Damascene business community is not ready to begin a big general protest strike yet,” said Fadi, 27, from a wealthy family of Damascene traders with a business just outside Hamadiyeh.

“Businessmen are cowards and have linked their interests directly with the Assad regime. I know some shop owners who partnered with senior officers in the security services or army. They pay the officers to keep their businesses open and in return are protected from paying tax and receive smuggled goods.”

But though not on strike themselves, Fadi said Damascene traders had been affected by the collapse of markets both at home and abroad.

“Last year our company sold to Libya, Sudan, Yemen, Algeria, Iraq and Europe. Now, no one wants to deal with us except some Iraqi traders. Even Lebanese banks stopped opening accounts for Syrians. For the last fortnight what I sold was only enough to pay bills and salaries. We open our shops just to drink tea and chat."

A GlobalPost journalist inside Syria contributed to this report.