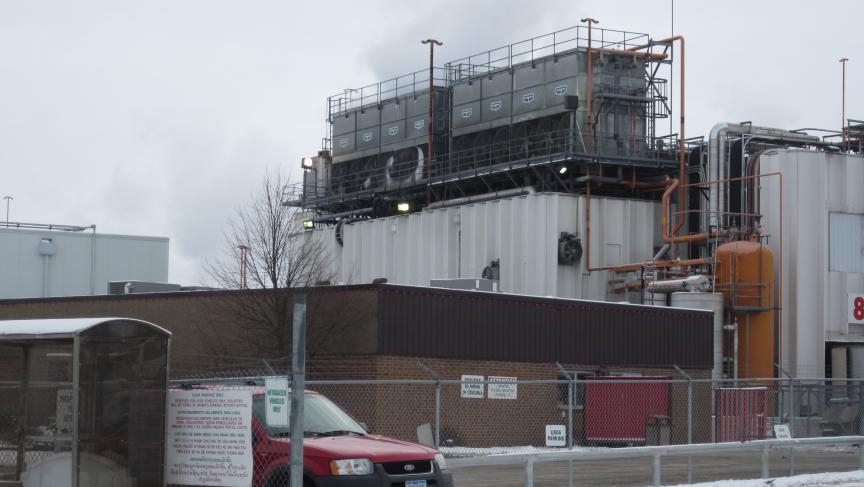 Immigration reform has come up in the Republican presidential debates, but it hasn't been nearly as big of a topic as in years past. The issue still evokes strong passions, however, in many small Iowa towns that rely on immigrant labor at their meat packing plants. It's an open secret: Many of the workers are undocumented. Storm Lake is a city of some 10,000 tucked in the corn fields of northwestern Iowa. The main employers are a turkey and hog processing plant.

Storm Lake's demographics run counter to the state. Iowa's population is 91 percent white. In Storm Lake, the school district is 22 percent white. The students are a mix of mostly Latinos, along with Southeast Asians and Africans. Many here, like Sara Huddleston, proudly say this mix is working.

"We call ourselves the conquistadores of this little town in the middle of nowhere," said Huddleston, who was among the very first Latinos to come here from Mexico back in 1989.

Sara Huddleston is living proof of the tolerance in Storm Lake: She was elected as Iowa's first Latino city council member a decade ago.

Her husband Matt added, "You have immigrants from Africa, and Eastern Europe, you have the Latinos, native born Iowans, everybody is in there, pretty much at the same time."

This infusion of immigrants is also helping Storm Lake's economy. Rural towns throughout the Midwest are dying. Storm Lake is not.

"Do we have some issues? Yes," said Police Chief Mark Prosser, who took me on a ride through town. "But do we have growing school districts? Yes. Do we have an expanding medical center? Yes. Are we building new businesses? Yes. All because of our immigrant growth here."

Yet the Congressman who represents Storm Lake is one of the most outspoken opponents of illegal immigration. Five years ago, Republican Steve King spoke in Congress about building a wall along the Mexican border and putting wire on top.

King said, "We could also electrify this wire with the kind of current that wouldn't kill somebody, but it would simply be a discouragement for them to be fooling around with it. We do that with livestock all the time."

King is popular in western Iowa and Storm Lake. He's been elected to Congress five times, winning his last race with two thirds of the vote.

David Swenson, an economist at Iowa State University, said there's a disconnect between King's popularity and his stance on immigration.

"I would argue that Steve King's position puts him at great odds with many of the needs of many of his, ironically, supporters, like many of the rural agriculture leaders, many of the animal operations, the food and food processing industry," said Swenson.

"These are all major businesses in western Iowa. Probably many of the officers and the people in those firms are conservative and conservative leaning. Yet they know darn well that their businesses thrive because they have access to this cheap labor."

Tyson Foods is one of the two major employers in Storm Lake. The company says it uses all the available tools provided by the government, and more, to verify documents of the people it hires.

A Tyson spokesman said starting pay at the hog processing plant in Storm Lake is $11 an hour. That's $4 above minimum wage. Tyson employees also get benefits like medical and dental insurance, paid vacations and a retirement savings plan.

"It's difficult work, hard work, repetitive work, monotonous work," said Prosser. "Sometimes there's the perception, and even criticism of shifting demographics that people categorized as 'those people' are taking jobs from the people who are native to this area, born and raised here, and that's just not the case. That's a myth. We don't have lines at our packing plants trying to get jobs."

Congressman Steve King disputes this. "When they say there are jobs that Americans won't do, that's not true, that's a lie that's been perpetrated against the American people."

"Every job in this country is being done by Americans, there's no job they won't do," said King. "But you need to pay them what it's worth. And I would like to see a tighter labor supply in this country, so that a person could get out of bed, go to work, and make enough money to pay for a modest house, educate their children, and plan for retirement. It's used to be that way."

Art Cullen grew up in Storm Lake and talks about the white picket fences of his youth. He's now the editor of the newspaper The Storm Lake Times. He's no fan of Steve King and his stance on immigration.

But Cullen agrees with the Congressman on at least one point: The meatpacking plants, run by Tyson and Sara Lee, aren't paying enough. Cullen says, sure immigrants keep this economy going, but the economic model isn't bringing the town prosperity.

"When you're living on $11 to $13 an hour, it's really tough to get by. And it makes it tough for a newspaper to sell newspapers, when people can't afford to buy a newspaper," said Cullen.

I was curious what workers at the meatpacking plants thought, so I went to the Mexican restaurant Juanita's.

The people I met said they like it here in Storm Lake, they're treated well, there are festivals celebrating different cultures. Still, they want to see immigration reform. I asked what they thought of Congressman Steve King. The answer I got from a young woman named Sonia is what most everybody said.

"I haven't paid too much attention."

Sonia's reaction was explained to me this way: Most Latino immigrants don't trust politicians back home, so they don't bother listening. Same goes for here too.