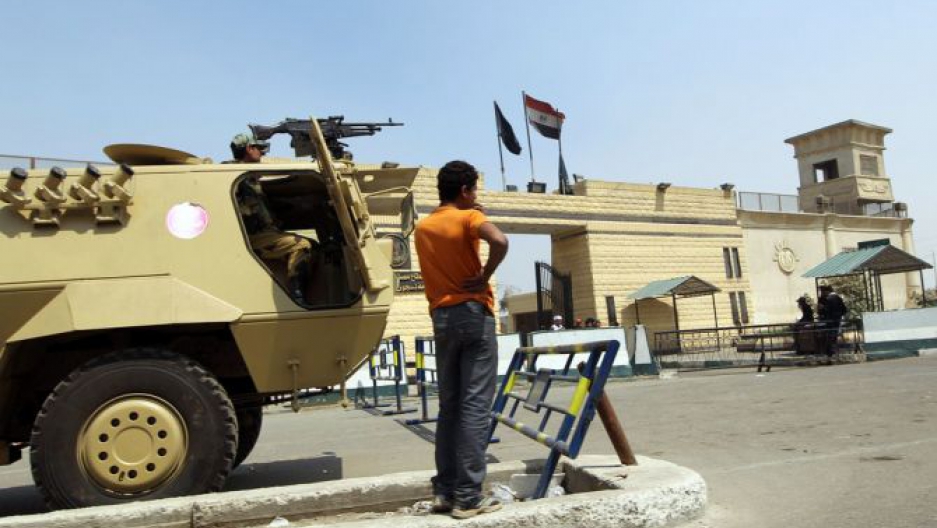 Egyptian policemen stand guard outside the Tora prison on April 15, 2011 soon after Alaa and Gamal Mubarak, sons of former Egyptian president Hosni Mubarak, were detained there. Tora was one of the sites where human rights groups allege fatal brutality took place in the early days of the revolution.
Credit: Khaled Desouki
Share

CAIRO – Whatever happened behind the bars of Egypt's prisons during the January 25 revolution remains a mystery.

Prison rioting was widespread and an estimated 30,000 inmates escaped in prison breaks as law and order collapsed during the uprising that toppled President Hosni Mubarak’s regime.

But in five maximum security prisons, there were no escapees. More than 100 prisoners and one officer died in a brutal lockdown that families of the victims and human rights activists allege was tantamount to a shoot-to-kill policy.

The Attorney General’s office has said only that an investigation is underway and has offered no further comment.

These convicted criminals were in effect executed by their prison guards, according to their families and eyewitness accounts provided by several human rights organizations who have undertaken independent investigations into the killings and secured access to video clips captured on cell phones by employees inside the prison.

Almost a year after these deaths, families of the deceased continue to seek justice and search for the truth about what happened. The case stands out in Egypt because of the preponderance of testimony and pinpointed allegations of who is responsible for the shooting deaths and the government’s indifference in pursuing an investigation.

“Every time I went, they told me the investigation was still going,” said Nadia Lotfi, who has been has been visiting the prosecutor’s office since February 2011.

On Sunday, January 30, Nadia received a call from her brother Ashraf Lotfi, who was imprisoned in Cairo’s Appeals Prison telling her “they locked us all in the maximum security bottom floors, they are shooting randomly at us.”

The Appeals Prison, situated in central Cairo and surrounded by the appeals court and the Cairo Security Department, is known for having windows that overlook a residential area. Families of prisoners gather under the prison windows and talk to their imprisoned relatives on a daily basis. This was a regular way for Nadia to communicate with Ashraf, who was serving a 15-year sentence for murder.

Nadia said she last talked with Ashraf on January 30. After that, she never heard from him again. On February 7, Nadia was informed by prison security that Ashraf was injured and transferred to a nearby hospital. She didn't find him there.

Instead, Nadia was informed at hospital reception that the bodies of the inmates killed at the Appeals Prison had arrived at Cairo’s central morgue that morning.

“It was the most frightening minute waiting for the morgue worker looking through the names of dead prisoners who were received at the morgue. My brother was listed among them,” Nadia said and broke down in tears.

Ashraf’s forensic report said that he was shot in the head: a bullet penetrated his chin and exited the back of his head. He died immediately.

Nadia managed to find a video clip shot by one of the staff sergeants working at the Appeals Prison. The video showed high-ranking officers of the jail shooting at and ordering accompanying soldiers to shoot at prisoners.

“Martyrs Behind Bars,” a 15-minute video published by the Egyptian Initiative for Personal Rights (EIPR) showed images captured by the cell phone cameras of employees inside the prison. The video clips from these cell phones depict officers shooting randomly inside prison cells and corridors. The EIPR video also showed testimonies of prisoners who witnessed the government-sponsored massacres. These spread virally on the internet in July and August 2011.

EIPR’s Magda Boutros and a few of her fellow researchers and lawyers published a full investigative report into the case locally known as the Prison Shootings. The report indicated that such brutal violations were committed in five prisons, Tora Prison Compound and the Appeals Prison in Cairo, Al Qatta Prison in Giza, Al Aba’deya in Damanhour, and Shebin El Kom in Monoufeya.

Pictures of protesters killed during clashes with the police were held high in protests in Tahrir Square through the summer and into the fall. Only one picture of the deceased was not held high. It was that of General Mohammed Al Batran, former Chief Investigator of the Interior Ministry’s Prisons Department. Al Batran was killed on January 29.

A recent report by the Egyptian Organization for Human Rights (EOHR) investigating the killing of prisoners dedicated an entire chapter about Al Batran’s mysterious death that might shed light on the reasons behind it all.

On Saturday, January 29, Manal Al Batran received a call from her brother.

"He was very angry and extremely agitated," she said.

"He kept repeating 'Al Adly is burning down the country,’" added Manal, referring to the now-jailed former Interior Minister Habib Al Adly, who is facing charges related to his alleged role in the shooting deaths of some 800 protesters during the uprising. As Interior Minister, Al Adly also oversees prisons.

Manal expressed her surprise at her brother’s attitude and comments, saying, "He was very careful not to discuss politics over the phone in case it was monitored."

Her surprise turned into panic when her brother continued. "He told me that 18 police stations were opened on January 28, and the detainees were released,” she said.”

“He was very worried about this happening in prisons too," she recalled, explaining that it was her brother’s belief that the officers were ordered to let prisoners out to create a state of anarchy that would end the revolution.

EOHR worked with Manal Al Batran in collecting and documenting testimonies. Prisoner in Al Qatta maximum security prison claimed that prison wardens were shooting randomly at them, trying to ignite riots and disorder in the prisons. Al Batran tried to interfere to calm the prisoners, and promised to suspend officers who were shooting randomly and put them under investigation. Manal believes the stand her brother took made him a target for assassination by his fellow officers.

Hafez Abu Seada, head of the EOHR, has gathered testimonies from inmates and officers and he believes that Manal’s suspicions of foul play are grounded, particularly by the findings of the coroner's report.

The official story of the Interior Ministry is that rioters kidnapped General Al Batran, used him as a human shield while trying to escape, and he died while prison guards were trying to disperse the riot.

Abu Saeda said the autopsy report, however, proves that Al Batran was killed by a single bullet that left an entrance cavity in his chest and an exit cavity in the lower back, proving that he was shot from a high place.

Both Manal El Batran and Abu Saeda are pushing for the prosecutor to file charges against Interior Minister Adly before the end of his trial for the ministry’s role in killing protesters.

Unlike other victims of the revolution, Al Batran's purported killer was identified by name in the testimony as the officer who was in the watchtower at the time.

“If the killer is convicted, it would leave no opportunity for the government to deny the usage of snipers, firearms, and live rounds during the revolution," explains Abu Saeda.

The EIPR’s independent fact-finding mission concluded the overwhelming majority of those killed during the Prison Shootings were hit with live ammunition.

Dozens of families filed legal action against the Interior Ministry and the prison authorities, all of which are sponsored by human rights organizations.

Families of the victims say that their appeals have been met with a consistent message from Egypt’s Attorney General: the government is still investigating.

In response to the delayed investigation, the EIPR sent urgent action requests to the United Nations and African Commission special mechanisms asking for intervention. According to a press release by the EIPR, the letters called on Special Rapporteurs to take urgent action to express their concerns to the government of Egypt regarding the severe violations suffered by the prisoners.

Boutros accused Egypt’s Attorney General of being "slow and biased," noting that not one accused officer has been remanded to custody.

Repeated attempts to reach the Interior Ministry for comment on the case went unanswered.