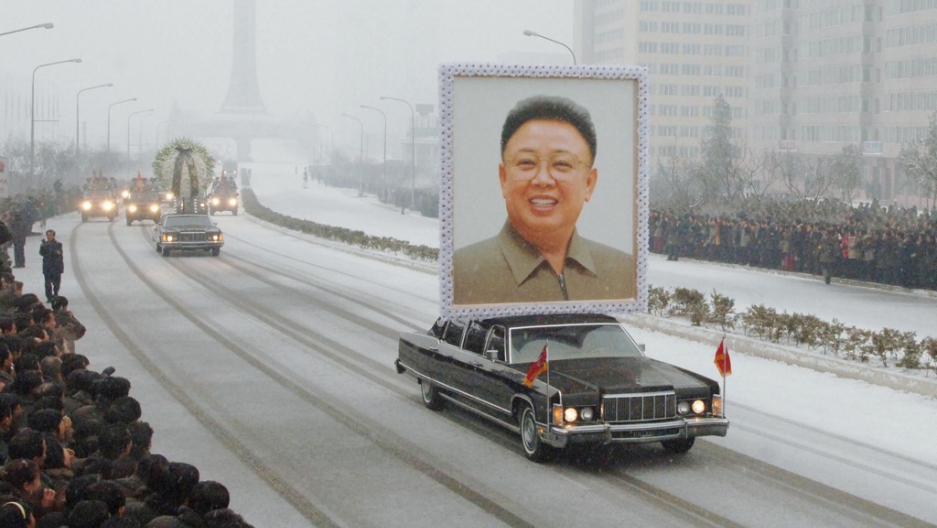 In this photo taken on December 28, 2011, a car carries a portrait of Kim Jong Il during the funeral procession in Pyongyang.
Credit: KYODO NEWS
Share

SEOUL — For a correspondent who witnessed the funeral in 1994 for Kim Il Sung, the long ruling “great leader,” the funeral for his son, “Dear Leader” Kim Jong Il was, if not exactly déjà vu, at least familiar.

It was as though whoever planned Wednesday’s display on the broad streets and squares of Pyongyang simply copied it from the playbook of that funeral 17 years and five months ago for the founder of the dynasty.

Except, however, for two notable differences.

Back in 1994, the skies were clear, and the trees lining the streets burst with green foliage as the cortege bearing Kim Il Sung’s coffin slowly wended its way along the 25-mile route past soaring monuments and Stalinesque apartment blocks to its final resting place in the memorial hall on a broad hill overlooking the city.

Read more: Will North Korea change for the better?

People along the way wore short-sleeved shirts, looking almost casual and maybe even a bit festive, but for the sad expressions they had to display for state TV cameras.

The setting today was so grim and depressing, downright funereal, that it could have come from a Hollywood drama of an awful day in Pyongyang.

A light snow was falling, the skies were a dull shade of grey. As in 1994, soldiers goose-stepped in uniform, and then bowed in silent tribute. But the wailing and tears of the people along the route seemed a little more genuine than last time.

The spectacle seemed to show just how oppressive and overpowering had been the rule of this man who enjoyed Hennessy cognac and the company of Swedish women, while his people starved in silence, on pain of execution or life in the vast gulag system.

But perhaps the most significant difference between the funeral for the father and the son was the visible presence of a successor. This time around, the heir apparent, Kim Jong Il’s third son, Kim Jong Un, walked on the right side of the hearse bearing his father’s flag-draped coffin.

Last time, the son and heir, Kim Jong Il, was so much out of sight that people wondered if he really was taking power at all. The whole charade lasted for three years, the length of time a good son has to show filial piety for his late lamented father, and then suddenly he appeared, riding high as chairman of the national defense commission, the center of power in North Korea, and general secretary of the Workers’ Party.

So why is it that Kim Jong Un has popped out of nowhere, the third son, in his late 20s, to such prominence that he has to be seen before his own people and everyone else as having pride of place in the pecking order?

The most likely reason: security. Kim Jong Il knew very well that he was in charge after his father died. He didn’t have to prove it, and he didn’t have a bunch of old generals, their chests gleaming with medals, telling him what to do or usurping his power. He was already in charge. His father had taken care of that years before.

This kid, however, is a rank upstart, a dropout from schools in Switzerland who may or may not have attended Kim Il Sung University, as claimed, and never had a real job. His life seemed to be heading nowhere until about three years and four months ago, when his father suffered a stroke and began to think seriously about securing his dynasty.

The French doctor who was flown from Paris and summoned to his bedside said Kim Jong Il, then 66, was unconscious when he first saw him, but perked up enough to ask about French wine and cinema, two luxuries close to his heart.

At about that time, the doctor has said, his gravely ill patient realized he had to start grooming a successor. The trouble was, his two eldest sons simply didn't measure up.

The oldest was a playboy who had embarrassed everyone by getting stopped by Japanese immigration in 2001 when he tried to enter the country with a fake Dominican passport, enroute to Disneyland with his family.

The second son seemed pleasant, but was reportedly too “effeminate.” Then he was filmed at an Eric Clapton concert in Singapore. He too lost out.

Kim Jong Il’s top priority then was to show Kim Jong Un what it takes to govern — and getting his highest aides to pledge the same allegiance to his son as they had to him and to his father before him.

Images of father and son inspecting factories, farms and military installations became regular features in the North Korean media. The last known photograph of Kim Jong Il before his death shows him descending an elevator in a shopping center with his son.

Behind them both was the mysterious uncle, Jang Song-Thaek, who is married to the Dear Leader’s sister. Jang was also walking behind him beside the hearse in the funeral cortege, and he was next to him when they bowed before his father’s body in its glass-cased coffin.

No one knows for sure who’s calling the shots in Pyongyang. Would it be Jang, widely viewed as “regent,” or the three generals also seen by the hearse — or unseen figures a notch or two down in the pecking order?

It's not clear whether Kim Jong Un has the strength and intellect to call the shots on his own. So far he hasn't uttered a word in public, although it's likely that he speaks English and German, and possibly even French, after his years of schooling abroad.

The image of this porcine figure, his girth distinctly more pronounced now than a couple of years ago when he was first seen on camera, does not exactly inspire confidence.

Then again, he may be just the figurehead that North Korea’s real power players need while playing their own games in a time of transition in which the most desired denouement as seen by North Korea’s friend China, and its foes, South Korea, the US and Japan, is “stability.”