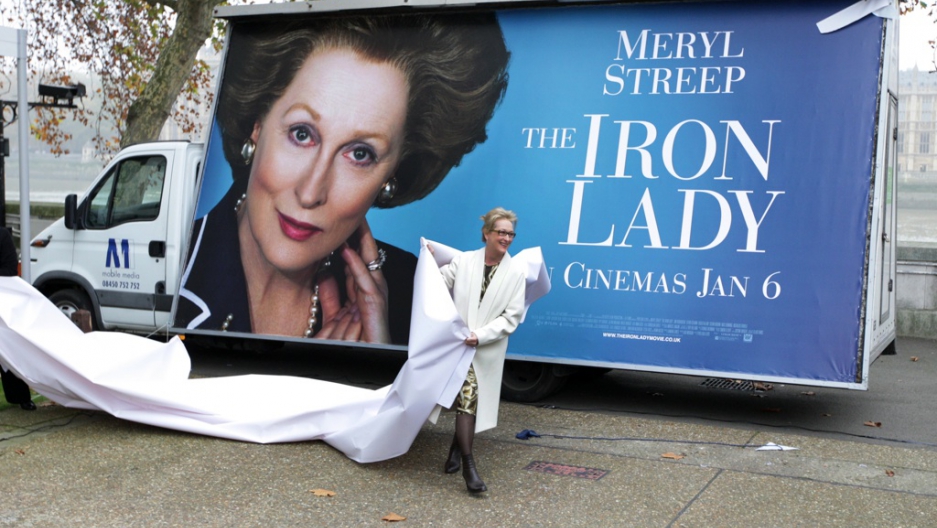 In London, Meryl Street promotes The Iron Lady, the biopic about Margaret Thatcher. But is the film an accurate portrayal of Lady Thatcher's life?
Credit: Dave Hogan
Share

It is the role of an artistic lifetime for Meryl Streep, who delivers arguably her greatest performance.

It is a true exploration of aging and grief.

It is a film that continues a burgeoning trend: a positive reassessment of Thatcher's life by the kind of left-wing, publicly funded artists the former British PM was reputed to hate. The BBC's "The Long Walk to Finchley," a drama worth seeing, kick-started the trend a couple of years back.

In this new-era of reassessment, Thatcher is portrayed as a feminist class-warrior, fighting the prejudices of the male, privately-educated, Oxbridge elite that ran the Conservative Party when she first joined up. The tools she fights with are different, but much of her struggle takes place in the late '40s and early '50s before the better known arsenal of feminist politics had been mooted.

Mrs. T's greatest flaws — her unyielding nature and hard-heartedness in power — suddenly seem understandable in the context of a fight for her political career. She appears to be a pioneer, like the tough women who crossed the prairies, rather than a highly educated devotee of the free-market economics of Milton Friedman and Friedrich Hayek. She was a pioneer of sorts, at least, who happened to be married to an oil company executive.

More than anything, "The Iron Lady," is a Shakespearean tragedy, if the Bard had written tragedies built around women. This is a King Lear with a woman at the center: in her world, she was once all powerful; now, as depicted by Streep, she becomes a ruin, lost in memory and hallucination.

But for all the wonderful things it is, the film is not history. The events that marked Thatcher's politics — her economics and their effect on the people of Britain — are not really part of this film.

This is history: Thatcher's economic policies led to two recessions in her 11 years in power. The second one was only just beginning when she was deposed.

This is history: the British government is an "elective dictatorship" in the words of Quintin Hogg, Thatcher’s Lord Chancellor (who is in charge of courts and judiciary). Hogg was referring to the fact that in Britain there is no separate executive branch of government. The prime minister is a part of the legislative branch, and has a disciplined, well-whipped majority of MP's to vote through any legislation he or she wants.

Thatcher's program was radical. It amounted to nothing less than an attempt to rewrite the social contract that had existed in Britain since the end of World War II, and it was enacted with alacrity.

The result was predictable: a recession. Within 18 months the number of people out of work had doubled to 3 million, or 1 in 8 members of the work force. With her own party worrying about whether the jobless rate was too high a price to pay for her policies, she addressed them at the Conservative Party conference: "You turn if you want to; the Lady's not for turning."

That moment defined her time in office.

Read more: Sarkozy sells out to Germany on euro rescue.

This is also history: Margaret Thatcher waged two wars. The first, in 1982, was against Argentina in the Falklands. The second, in 1984-85, was in Britain against the unions. More Britons died in the former. More Britons suffered in the latter.

Of all industrial workers in Britain, the miners were the most iconic. They were the men who risked their lives underground to bring up the fuel that had fired the industrial revolution. The coal mines had been nationalized for decades and the miners' union was strong. Thatcher believed in shrinking the state and taking on the nationalized coal industry and with it the miners' union was the battle she chose. Six people would die and thousands would be arrested.

She broke the union and the coal industry, but she didn't break the need for the government to be a big employer. It is still the largest employer in areas where the mining industry flourished. On the 20th anniversary of the strike, 28 percent of all jobs in Yorkshire — once a center of coal mining — were in the public sector.

This is personal history: I moved to Britain a few months after the miners' strike ended and many of the early stories I reported were from the north of England, an area particularly hard-hit by Thatcher's economic policies. The devastation can not be overstated.

Communities that were never wealthy, but that had been solid and respectable, were turned into slums as jobs disappeared and public services were cut back. A settled way of life that stretched back generations was ripped apart in a matter of months, as a result of deliberate government policy. I have reported from many troubled places but I have never heard the raw hatred for a political leader that I heard in those communities gutted by Thatcher's economic policies.

In 1987, I went to Liverpool to report on how the success of its professional football teams had become central to keeping the city's spirit alive as it struggled with mass unemployment. The local paper had one page of help wanted ads and two pages of death notices. As a metaphor for much of England and Wales under the Iron Lady it stands the test of time.

The film recreates some of that history in images, but they fly by rapidly. If you don't know the back story they will have no meaning except to convey the sense that Margaret Thatcher turned some people into raving maniacs.

Curiously, in the kaleidoscope of recreated moments, one that is missing is the wellspring of emotion that has led to the current reappraisal.

As she left 10 Downing Street for the last time and stepped into a waiting car with her husband Denis, a photographer caught a shot though the car window of tears welling in her eyes. The Iron Lady had cracked. Even those who hated her and were rejoicing in her downfall, were moved by this show of feeling, something that Thatcher had kept bottled up during her 40 years of political life.

Of course, the biopic focuses on drama. If you want history, try the BBC documentary department or perhaps the Burns brothers. To understand the single most powerful politician Britain has known since Churchill, you want to examine the human being. Here is where Meryl Streep goes to a place that is simply devastating.

Margaret Thatcher as prime minister was so dominant that it seemed she had been born with handbag and helmet hair in place. In fact, her persona was created by image men who agreed with her message but didn't like the way it was presented.

They brought in a voice coach who helped her lower her voice and taught her to tone down her more strident way of expressing her opinions. But beneath the shell, she remained what she was: the daughter of a small-town grocery store owner in the days before credit cards existed. In her world, everything that was bought had to be paid for.

She grew up with the resentments of her class for those below them who were improvident, and those above them who had inherited their positions and not earned them. The secret of her success was that there were many traditional Labour voters who felt the same way. In America they were called Reagan Democrats. Thatcher won them over and for a while looked as if she had forged a new coalition that might win elections forever before it all went to her head.

Streep is astonishing in the way she catches all that complicated class history in her voice, in a flick of distaste in her eyes, and, finally, in the megalomania that led her own cabinet to depose her.

Thatcher's rise, fall and long decline into dementia is a story worthy of Shakespeare and is acted out by an artist more than up to the challenge. Even if the history is left out, the "Iron Lady" contains more truths about the psychological price this radical leader paid for her achievements than a hundred biographies.