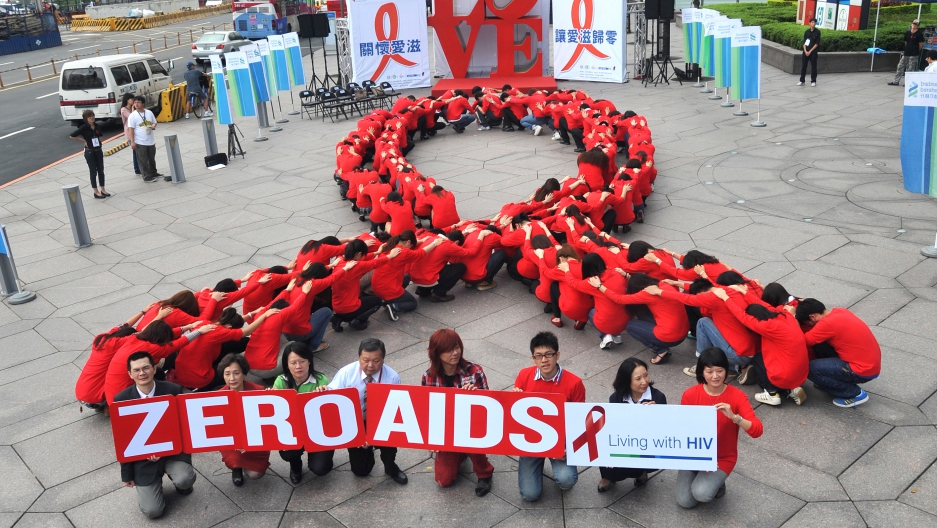 Dozens of volunteers join a human chain in the form of a red ribbon, a symbol of 'love and care' for HIV and AIDS carriers worldwide, at a gathering in downtown Taipei.
Credit: Patrick Lin
Share

Kalpana Jain was a reporter at The Times of India when she encountered a woman facing an incredible choice: save her two children suffering from measles or the buffalo the family depended on for survival.

The mother had four other children and meager resources. What could she do? Sacrificing the sick for the buffalo, she chose the four healthy.

“What does that tell us about a country, a family, the system?” asked Jain, an 18-year veteran of the Times who in June received her master’s degree in public administration from Harvard University and is now a fellow at the Schuster Institute for Investigative Journalism at Brandeis University. “This is what I look for when I report on global health.”

Calling global health reporting a “true inter-disciplinary field,” Jain and about 25 journalists emphasized its importance at a December seminar entitled "Global Health and Story Telling in the Digital Age." The even was sponsored by the GlobalPost and the Nieman Foundation for Journalism at Harvard. The journalists discussed challenges they faced in covering global health during a time of shrinking budgets and within an industry struggling to balance hard-hitting coverage with the need to continually update websites and attract readers.

Sam Loewenberg, who has written for The New York Times, the Guardian, and Slate, among others, said he couldn’t garner interest in a story about the recent hunger crisis in the Horn of Africa, which this summer suffered the region’s most horrific drought in 60 years. Humanitarian alerts described it as the worst such disaster in the world with inadequate response efforts. Yet, Loewenberg said, “nobody cared.”

“One news magazine said, ‘Oh, that could be interesting, but we’re going to have to meet with editors and see what the angle is and come up with an interesting approach to this.’”

“Eight million people are going hungry and that hasn’t been reported anywhere,” Loewenberg replied. “What angle are you looking for, exactly?”

Eventually, he sold the piece to The New York Times opinion page. But it was “a missed opportunity,” he said of the lack of media coverage. “Because there are a lot of things that can be done. But that’s the horrible result of the lack of press because it means the politicians don’t pay attention so the money doesn’t come.”

Loewenberg pointed to the drastic downsizing of foreign bureaus over the past decade, saying, “now these stories aren’t getting covered. We can see how that directly affects funding … by putting stuff out there, we are affecting public policy.”

Sparking — and sustaining — the interest of editors and readers in global health stories is challenging, journalists said. It was the global AIDS crisis which helped draw attention to such issues in the first place. Christine Gorman, the health and medical editor at Scientific American and a former writer for Time, said she had to play off the interests of her former editors even to get stories about AIDS into the paper.

“I had to think about how do I convince my possibly homophobic male editors who mostly cover wars and Capitol Hill that this is something they should be paying attention to,” she said.

Only by appealing to their interests — that the virus wasn’t limited to gay men — was Gorman able to shine a light on a then largely uncovered and unknown epidemic.

Writing for the Guardian, Sarah Boseley said she, too, was pulled into covering global health through attending the Durban AIDS Conference in 2000, when she said she was “bowled over.”

“The stories just rip you apart,” she said. “These are the same people we are ... this is a woman I could have been. I think if you write it in that way, you can hook people.”

Boseley supplements her reporting with a blog because there are “all these fascinating global health stories I knew I wouldn’t be able to get in” the paper. She wants to “provoke” people who wouldn’t normally read about the issues and looks for ways to draw readers, through an interesting headline or lede, or a controversy in which everyone has a stake, such as the pharmaceutical industry,

Journalists must try to make global health stories fresh and infuse new life into tired narratives, said David Baron, a health and science editor at the public radio program PRI’s “The World.” As an editor, he said he’s often bored by the stories journalists pitch.

“Tell a tale,” he said. “Where things happen and you learn something along the way.”

Global health reporting can and should be a “window” into addressing the spectrum of challenges facing the world, from political to economic and scientific, journalists said. Powerful global health reporting makes the connections between different sectors, from the companies to the politicians to the people impacted and the medical, food supply, and infrastructure issues.

“It’s so important to do what we do because often the agencies, governments, are working in their own silos,” Loewenberg said. He recalled asking an Ethiopian deputy health minister about what they were doing to tackle the lack of clean water – the number one complaint among people he interviewed.

“Oh, that’s not me,” the minister replied. “That’s the Ministry of Water.”

“That’s what we do as journalists,” Loewenberg said. “Making those connections.”

But the dwindling revenue streams of media organizations makes telling these important stories increasingly difficult-- from battling billion-dollar pharmaceutical companies to capturing the attention of an audience exhausted by the revolving door of tragedies. Telling a depressing story -- especially when there is no ready solution -- often turns readers away. Journalists here said they try to relate issues “even to some mother sitting at home in Michigan,” said Margie Mason, the Asia-Pacific medical writer for the Associated Press who wrote an award-winning series on drug resistance.

Sometimes that’s through the packaging, the headlines and the photographs. Building a following on Twitter and being part of the online conversation can help. Framing a story in a way that makes it interesting, different. Or choosing how to focus on the issues.

“I don’t think people want to read about ‘here’s another bad thing,’” Loewenberg said. “To me, the two things to focus on are missed opportunities, places where bad things are happening where they shouldn’t be, and also things we can affect … if we’re screwing up and we’re spending money here when we should be spending money over there, that’s something we can take responsibility for.”

Global health reporting can inflict emotional, and even physical, damage on the journalists who cover these stories. Jain, for instance, was writing about the resurgence of India’s pneumonic plague in 2002 when her son was only two.

“We didn’t know what we were getting into,” Jain said. “You were wearing your mask but no one knew whether the drugs were there, whether they’re working.”

Her son fell suddenly ill with an acute infection. Doctors thought he had contracted the plague. Though it turned out to be something else, Jain said, “you’re going home and holding your baby and wondering if you’re infecting your baby?”

Journalists also face ethical dilemmas when reporting on poverty and illness, especially when there are no financial resources or cures.

“People are looking at you saying, ‘have you got something for us, a medical cure,’” Jain said. “And you know you don’t.” Yet, she said, “you’re taking their stories.”