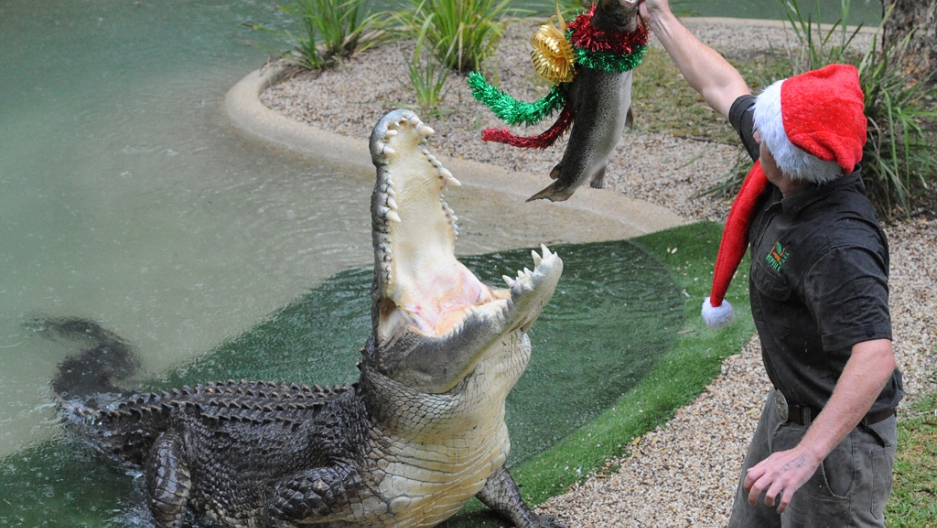 Elvis, seen here being fed holiday-adorned fish, made headlines today when he attacked one of the lawn mowers at the Australian Reptile Park near Sydney.
Credit: Torsten Blackwood
Share

Elvis, a crocodile from the Australian Reptile Park near Sydney, took down one of the zoo's lawn mowers today.

According to The National Post, the 16-feet, 1,100-pound crocodile lunged at a park worker's lawn mower and latched on.

Billy Collett, the employee who was handling the lawn mower, told reporters that it happened very quickly, and that his heart almost jumped out of his chest.

“We’d just started mowing, the croc’s sitting about five foot away from me in the water, then [the] next second he’s attached to the end of the mower, dragging it in, and almost taking me into the drink with him," he said.

The Daily Mail reported that Elvis lost two teeth during the endeavor, but he kept guard over his newly acquired contraption while it sat underwater.

The park's operations manager, Tim Faulkner, said that the workers had no choice but to go back for the mower.

"Along with Mr. Collett, [Faulkner] devised a devious plan—a life or death plot to snatch the mower back from the cranky 50-year-old croc," The Daily Mail reported.

To distract Elvis, Collett tied raw kangaroo meat at the end of a stick and dangled it at one side of the pool.

As the reptile swam towards it, Faulkner leapt into the water, grabbed the mower's handle, pulled it out of the pool and out of the enclosure.

"[Elvis] will calm down eventually," Faulkner said. "To him this was just big game. He stole our mower and now he thinks he's king."