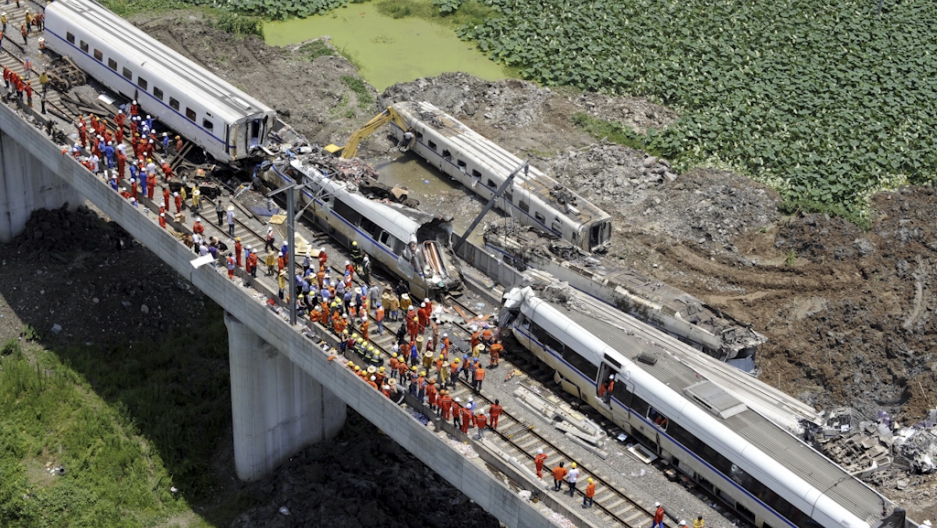 This aerial photo taken on July 24, 2011 shows rescue operations continuing on the wreckages of two high-speed trains that collided the night before in the town of Shuangyu, on the outskirts of Wenzhou in the eastern Chinese province of Zhejiang. China has ordered an 'urgent' overhaul of rail safety, state media said Sunday, after 43 people were killed in the worst accident ever to hit the country's high-speed train network. The collision of two trains in eastern China is likely to raise fresh questions over the rapid roll-out of the country's high-speed lines, the world's biggest at more than 5,000 miles.
Credit: STR
Share

The Chinese government said today a bullet train crash that killed 40 people in July was caused by “design flaws” and “sloppy management,” the Associated Press reported.

After a long-awaited investigation into the crash, near the south-eastern city of Wenzhou, China's cabinet said 54 officials were responsible for missteps that led to the disaster.

The crash, in which almost 200 people were injured, cast doubt on the feasibility of China's high-speed railway projects.

It led to accusations that the government was putting the development and profit of its bullet train network before safety, the BBC reported.

Officials were also accused of trying to cover up the causes of the crash.

The disaster happened when the signal system at Wenzhou South Railway Station failed to turn the green light to red, after being struck by lightning. One train had stalled, a second high-speed train ran into it.

Chinese Premier Wen Jiabao was handed the investigation's conclusions at a cabinet meeting on Wednesday.

The report found that improper handling of the lightning strike led to the crash, Reuters reported.

The government said in a statement on its website that the Railways Ministry "did not properly handle rescue efforts, did not issue information in a timely manner and did not correctly address public concerns, which created a bad influence in society," Reuters reported.

The investigation's report said 54 officials would receive administrative punishments, with the possibility that more serious penalties could follow.