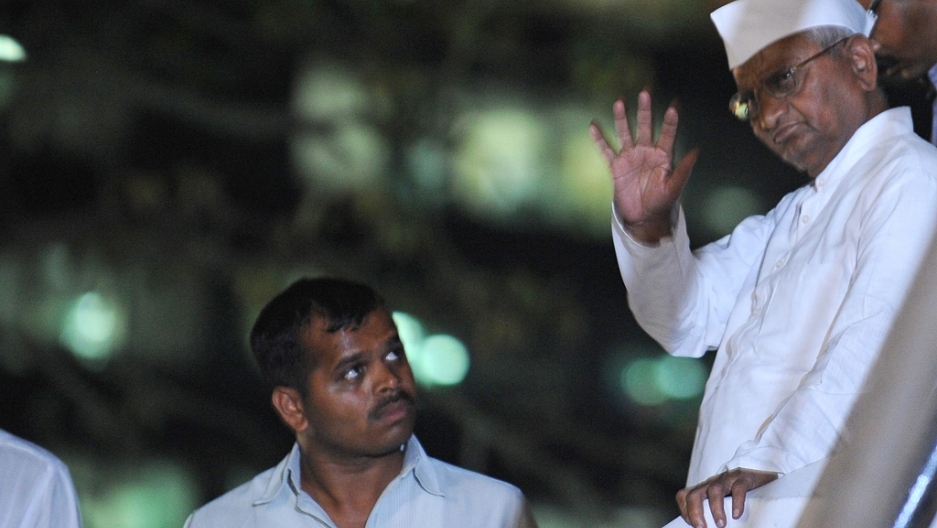 According to Al Jazeera, the 74-year-old activist said his doctors advised him to eat again during the second day of his fast. Hazare is believed to be suffering from low blood pressure, and doctors are concerned about his kidneys.

CNN reported that a doctor who examined Hazare said he was running a fever and this his blood pressure had gone up. He was also coughing and appeared to be tired.

Hazare began the fast on Tuesday, hoping to pressure the government to amend an anti-corruption bill that he believes does not go far enough to regulate misconduct.

The Lokpal and Kokayutas bills are intended to set up a powerful ombudsman to investigate and prosecute government officials for corruption.

Hazare has been leading a national fight for an anti-corruption bill since this summer. He went on an earlier hunger strike in August.

Despite his pleas, the proposed law, which was passed by the lower house of parliament on Tuesday, did not allow for several things, such as "the ombudsman to initiate investigations independent of a complaint."

According to GlobalPost's correspondent in New Delhi, the bill also did not give the ombudsman direct supervision, or give the him control over the Central Bureau of Investigation.  The law also gives the ruling government some significant control over personnel in the ombudsman office.

Reuters reported that Hazare also  canceled plans to picket the homes of senior politicians, including Congress party head Sonia Gandhi, over the next year.

Although Hazare's support has thinned out over recent months, his demand for a "stronger ombudsman will figure prominently in the upper house debate," Reuters reported.

The bill is expected to be voted on in the upper house on Thursday.