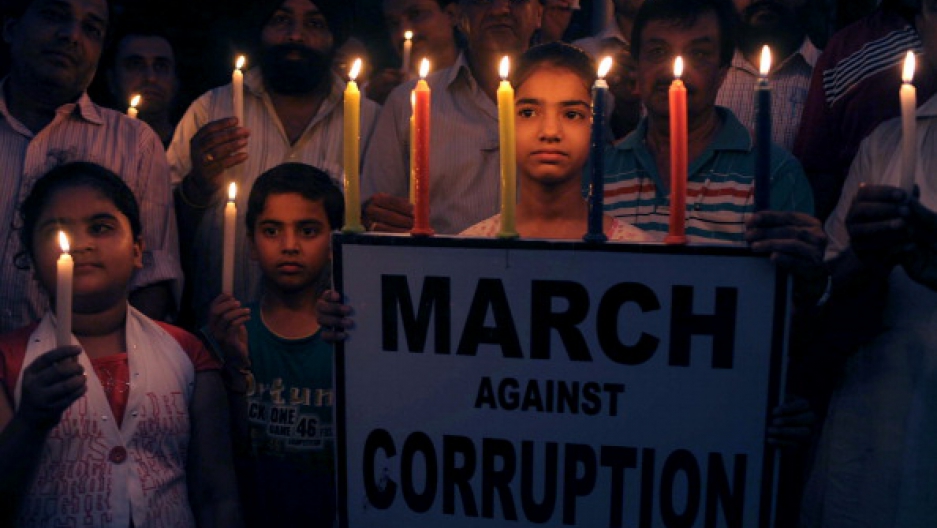 Supporters of anti-corruption activist Anna Hazare hold placards and candles during a protest against corruption in Amritsar on August 23, 2011.
Share

NEW DELHI, India — The Indian government pushed a bill designed to fight corruption through the lower house of the parliament late Tuesday, in a move that has exposed the limitations of street-protest politics.

Demonstrators can demand that a law be passed and vow to vote out politicians who oppose it. But they still cannot draft bills themselves.

The government's so-called Lokpal and Lokayuktas Bill would set up a powerful ombudsman to investigate and prosecute government officials for corruption, as the anti-corruption movement led by social activist Anna Hazare has been demanding since he first lauched a hunger strike this summer.

But the proposed law does not allow the ombudsman to initiate investigations independent of a complaint. It does not put low-level officers of the bureaucracy under the ombudsman's direct supervision, and it does not grant the office control over the Central Bureau of Investigation, India's chief law enforcement agency, or allow it to constitute its own investigation wing.

Moreover, the law gives the ruling government significant control over the selection of the members of the ombudsman's office.

All these supposed shortcomings — which Hazare's team has called “non-negotiable” — have prompted the activist to embark on yet another a hunger strike, this one three days long, in protest. And he has called on his supporters to force police to arrest them through mass acts of civil disobedience, beginning Jan. 1.

Team Hazare is hoping for a repeat of the massive, nationwide agitation that shook India's politicians out of complacency this August. At that time, tens of thousands of protesters — disgusted by corruption scandals surrounding the Commonwealth Games and the distribution of 2G telecom spectrum licenses — took to the streets in support of the activist's hunger strike.

But at least some experts argue that the government's anti-corruption law could have a salutary effect.

“We have to see how it plays out,” said M.R. Madhavan, a researcher at PRS Legislative Research. “A lot of it will depend on the personalities involved in the first few years. Many institutions at the end of the day are shaped by the people running them.”

“The Election Commission had largely been a somnolent body which was basically going through the motions of holding elections,” said Sumit Ganguly, a professor of political science at Indiana University.

“But under a man called T.N. Seshan in the late 1980s, early 1990s it became a much more formidable body, and a body that decided to take the statutory powers it possessed and genuinely implement them to make elections fair, open, honest and transparent.”

The niceties of the law notwithstanding, the Lokpal could accomplish the same transformation.

“I genuinely think that if you get a group of individuals in the Lokpal who are serious about this endeavor ... the Lokpal could become a similar institution,” Ganguly said, citing similar successes achieved by the Securities and Exchange Board of India (SEBI) and the Reserve Bank of India (RBI).

“A number of institutions in India do work, and do carry out the tasks they're expected to perform,” he said.

Before its proposal becomes a law, Prime Minister Manmohan Singh's United Progressive Alliance (UPA) government will also need to get the Lokpal bill through the upper house of the parliament — where the coalition does not have a majority. Debate is underway there as this article goes to press, but there are only several possible outcomes.

With the tacit support of two opposition parties that abstained from voting in the lower house, the bill could go through unchanged. It might be amended and returned to the lower house for reconsideration. It might be voted down, then later approved by a vote by the combined houses. Or it might be rejected and put off indefinitely, like a bill to set up a quota for women in the legislature that has theoretically been pending since it was passed by the upper house in March 2010.

Whether its Lokpal bill works or not, however, the government's success in pushing it through the lower house — where Singh's UPA enjoys a slim majority — has stolen much of Hazare's thunder.

It's easy to mobilize people who are angry because nothing is being done about all-pervasive corruption. It's far more difficult to rally the masses around a difference of opinion about the finer points of a piece of legislation — just imagine if the Occupy Wall Street movement hinged on the nuances of banking reforms.

Perhaps that's why, according to some estimates, only around 4,000 people showed up for the hunger striker's Mumbai demonstration Tuesday — compared with a daily turnout of 30,000 to 40,000 people in Delhi this summer.

But confusion and protest fatigue aren't Team Hazare's only problems.

At the beginning of the anti-corruption movement, Hazare succeeded in mobilizing people against an amorphous lot of dirty politicians he portrayed as opposing the Lokpal bill. Now, his team is attempting to shift that anger onto the government and, more particularly, the Congress party — announcing that he will campaign against the Congress during state elections in Uttar Pradesh this February.

Hazare and company maintain that the anti-corruption movement can no longer stand outside and above electoral politics. But now that Hazare has joined the fray, what will he argue? And, more importantly, who will he campaign for?

Even if the Congress-led UPA has failed to meet all Team Hazare's demands for the Lokpal bill, it can hardly be said that the Congress has taken no action against corruption — though belatedly, perhaps.

Along with its version of the ombudsman law, the government on Tuesday pushed through the lower house a law to protect whistleblowers and on Wednesday it also introduced a judicial accountability bill designed to set up a credible mechanism for investigating corruption complaints against judges.

Moreover, only some of Team Hazare's objections to the Lokpal bill, such as the decision not to grant it control over the Central Bureau of Investigation can be traced to the Congress. Other dilutions, such as the rejection of a proposed amendment to grant the Lokpal constitutional authority and a decision not to compel the individual states to create their own anti-corruption watchdogs, were concessions to the opposition Bharatiya Janata Party and Singh's allies in the Dravida Munnetra Kazhagam and Trinamool Congress.

And both of the Congress party's main rivals in Uttar Pradesh — the caste-affiliated Samajwadi Party and Bahujan Samaj Party — abstained from voting on the Lokpal bill at all.

Two things are certain. The war against corruption is far from over. And street protests will have limited usefulness in the next stage of the battle.

“At the end of the day you cannot get at something as nuanced as this with a few hundred people screaming,” said Madhavan. “The nuances have to be discussed in a civilized place, with people listening to each other. It doesn't always happen, but in some sense, parliament is supposed to do that.”