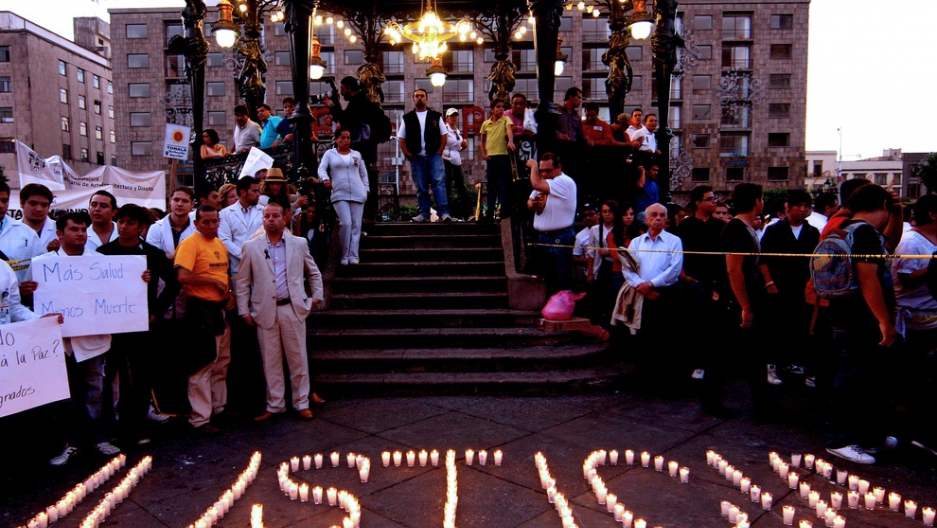 The candles spell out "Justicia." It's what many Mexicans have been asking for.
Credit: STR
Share

In Mexico City, five police officers have been arrested for their alleged ties to a video that appears to show abuse of a suspect in custody.

Milenio Television reported last month that one of its reporters had taken the video of an officer repeatedly pushing the man's head into a bucket of water while his T-shirt was pulled up over his head and face.

This isn't the first time that Mexican security officials have been accused of crossing the line. A report by Human Rights Watch leveled charges of torture against Mexican forces, including the Marines, a US-trained force that was touted as weapon that would change the country's fortunes in its war against the cartels because of their advanced equipment and training.

In the report, the New York-based watchdog group said that Mexico's security forces had "exacerbated" the climate of lawlessness, violence and fear in many parts of the country, by regularly using torture to elicit information and confessions from suspects. It also found evidence suggesting that soldiers and police had been involved in extrajudicial killings and disappearances.

The government promised to look into the claims.

Shortly afterward, an American man was released from custody after nearly two years when the US Department of Justice said that he had been tortured by Mexican soldiers. The 29-year-old man had been detained for possession of marijuana. The man said the drugs had been planted on him. At a military base, the US said Mexican soldiers beat him with rifle butts, tortured him with electric shocks, and threatened to kill him.

A Mexican man who had accused the police of kidnapping his son was gunned down in an unsolved shooting. Police said the man had been targeted for his ties to the drug business.

So the arrests of the five suspected of mock-drowning a detainee are noteworthy, if not earth-shattering. It could suggest at least a willingness by the government to acknowledge its role in the lawless environment that persists in many areas.

Of course, this is an incredibly small sample. An estimated 40,000 people have been killed in the past five years of President Felipe Calderon's drug war, and at least some of those are believed to be victims of extrajudicial killings. This tally doesn't include the missing, by the way.

But any effort by the government to offer accountability is a step in the right direction. Fighting criminals by becoming a criminal doesn't usually work out so well.