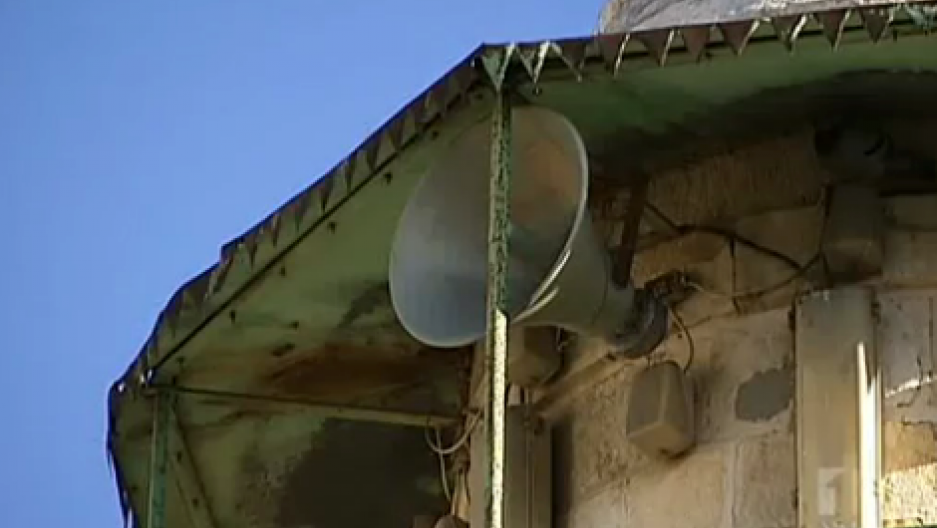 Speakers like this one on a mosque in East Jerusalem play the Muslim call to prayer every day, and that has some non-Muslims outraged. (Photo from ABCau video.)

Some of Israel's Jewish population are upset at the Islamic call to prayer, played from speakers atop the mosques' minarets.

They say it interrupts their sleep and disturbs their peace and they want it to stop. A member of the Israeli parliament has introduced a bill to do just that.

"It's loud. Recently they built some new buildings over here and in order to get over the new buildings, they actually put up bigger and better speakers," said on Israeli Jew who lives more than a football field away from a mosque in East Jerusalem.

The call to prayer starts at  4 a.m., when a local imam rises to recite the traditional chant.

Anastasia Michaeli, an ultra-nationalist member of of the Knesset, wants to ban the use of loudspeakers in all religious worship.

"It's something that many times people are complaining," she said.

The bill would also include churches and the siren that sounds at the start of the Jewish Sabbath, though it unquestionably is targeted at the Islamic call to prayer.

"We are dealing with a series of anti-Arab, anti-Muslim bills this Knesset is passing, week-by-week. This is one of those anti-Islamic bills," said Ahmad Tibi, an Arab Israeli member of parliament.

Prime Minister Benjamin Netanyahu has endorsed the bill, though many of his top advisers and ministers are against the legislation. Opponents say it will only make existing tensions in the country worse.