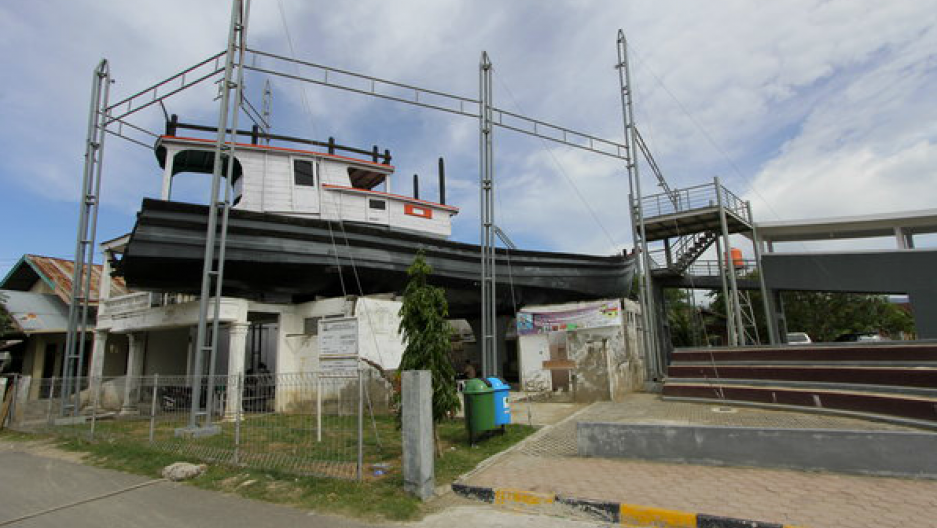 This Indonesian fishing boat saved the lives of 59 people after a deadly tsunami washed it miles inland in 2004. It's preserved now for tourists to examine. (Photo by Niall Macaulay.)

From atop a viewing platform, tourists can state down into a fishing boat, perched securely atop an Indonesian home.

No, they're not looking at some art exhibition. These tourists are in Aceh province, looking at the wreckage and landmarks of a tsunami that ravaged much of Indonesia in 2004. Below the viewing platform are tsunami-related pictures.

On Dec. 26, 2004, a massive earthquake triggered a tsunami across the Indian Ocean, killing an estimated 230,000 people, many of them from the northern Sumatran province of Aceh.

One of the most iconic images of the tsunami’s wrath was this 30-foot fishing boat, thrown miles inland and left on top the ruins of a house.

Some 59 people clung to the boat until the surge passed; all of them survived.

Ponny, who goes by one name as is the custom in Indonesia, had seen the pictures but still wasn’t prepared for the reality:

“I think this is awesome!” Ponny said. “The people in this ship, nobody died, so this is a miracle.”

Ponny is among the growing numbers of tourists who have come to Aceh seven years after the tsunami to see the relics of destruction. Around the wreckage, tourist facilities have sprung up.

Petriani and her sister opened a popular noodle shop under the beached boat. Petriani said after the tsunami this place became very well-known.

“That’s why my sister and I took the place. And word of mouth spread quickly, so people know the place and it’s easy to find us here,” Petriani said.

Across the street, 51-year-old Abdul Wahab sells drinks, snacks and souvenirs. He came here after the tsunami looking to make some money helping with the cleanup.

Now, he sits in front of his small shop serving thirsty tourists. He smiles at his good fortune, but said he sometimes he feels embarrassed, since it is such a sad place.

“I see people crying before they go up the platform,” Wahab said. “They remember what it was like here the day before the tsunami.”

About a mile away, the Aceh-Nias Rehabilitation and Reconstruction Agency, or BRR, built a $6.7 million Tsunami Museum. It showcases photographs of victims, stories of survivors and an electronic simulation of the undersea earthquake that triggered the wave.

Officials say more tourists come to see the aftermath of the tsunami than come for the area’s wide, sandy beaches. Yusny Saby, a professor at the State Institute of Islamic Studies in Aceh, said it may sound morbid, but it’s actually very healing.

“We call it spiritual tourism,” Saby said. “If it were not for the tsunami, we would have still been in war. So the tsunami is a sort of blessing in disguise. We lost a lot, but it speeded up the process of bringing peace.”

For nearly 30 years Acehnese rebels were in a civil war with the government of Indonesia. That too had become a draw for tourists.

Zulkifi once worked as a tour guide in Jakarta and Bali, but he now teaches English and German to classes of future tour guides. Some of those guides-in-training spent years fighting for the rebels. Before the tsunami, rebels holed up in the jungle. Now they’re engaged in guerrilla tourism — “terror tourism.”

In fact, many western embassies still issue travel warnings for Aceh. There have been sporadic attacks targeting foreigners in recent years. But still the tourists come.

“I didn’t expect it, actually, how it looked like,” said Erlbrich Elsenga, who’s here from the Netherlands, looking up at the fishing boat on the house. “It’s different from what I expected, it is a big boat. I thought it was maybe a small boat on top of a small house, but really big.”