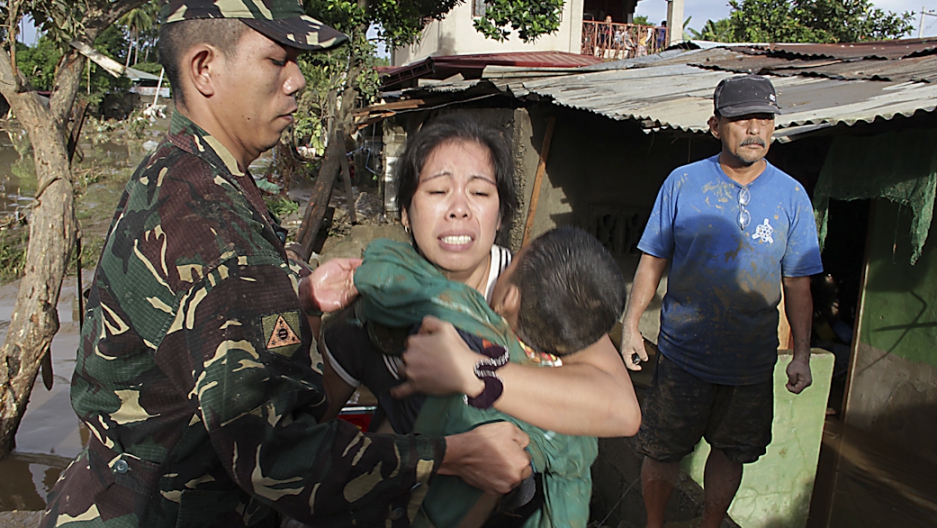 A soldier helps a woman holding the dead body of her child killed during the passage of Tropical Storm Washi at a village in Iligan City, on the Philippines island of Mindanao. More than 650 people were killed, and 800 more are still missing, after the storm triggered widespread flash floods in the southern Philippines.
Credit: CHERRYL VERGEIRE
Share

A week after the southern Philippines was hit by devastating flash flooding, the death toll on Tuesday hit 1,249, Agence France Presse reported.

Authorities initially said the fatalities had jumped by more than 200 to 1,453 when more bodies were found in the island of Mindanao, but the figure was later revised downwards due to “double-counting,” AFP reported.

More from GlobalPost: Philippines typhoon kills up to 900 people

More bodies are expected to be found, but Benito Ramos, head of the national disaster rescue agency, said there were no reliable figures on how many people were missing.

The flash flooding was triggered by Typhoon Washi, which hit the port cities of Cagayan de Oro and Iligan on December 16.

Ramos said many of the victims had been asleep when the storm hit. Rivers burst their banks after 25 millimeters of rain fell within a period of 24 hours, while the island was battered by winds of up to 55 miles per hour.

"Even the [corpse] sniffing dogs are tired ... There are still a lot of areas we have examined that are stinking of dead bodies. We don't know how many people are buried under that mud."

Richard Gordon, who heads the Philippine Red Cross, told the BBC that long-term housing was a challenge.

"Right now, what they [flood victims] are in need of is transitional housing ... The problem is land. We need to have safe land, land that will not be threatened by any earthquake or any floods or any landslides."

Philippines authorities have said they will set up tent cities in safe areas to house victims temporarily until more permanent solutions are found, AFP reported.