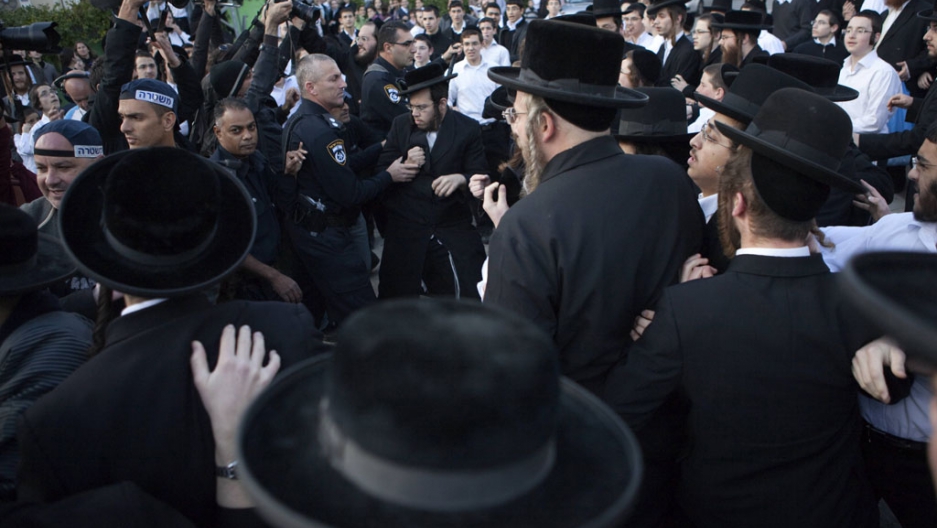 Hundreds of ultra-Orthodox men rioted and attacked police officers in the central Israeli city of Beit Shemesh today, as the media continued to reveal increasingly grave acts of the exclusion of women from public spaces in the community.

Following a wave of exposés about the harassment of women and girls on buses and even on city sidewalks, municipal authorities in Beit Shemesh announced the installation of 400 cameras to monitor public areas.

A group of senior rabbis in Beit Shemsh issued a statement condemning "all forms of violence” but criticizing the media for “disrespecting the values of our community and causing a provocation.”

Despite the anger at the media, the incidents appear to result from a previously tamped-down wellspring of emotion that was unleashed by the complaints of women, starting about two weeks ago, stating they were being relegated to the backs of public buses on lines serving mostly ultraorthodox passengers.

A growing number of women who are themselves members of ultra-Orthodox community have turned to the media about acts of exclusion in the public sphere as increasingly extremist rabbis turn a deaf ear to their plight.

In Beit Shemesh today, one police officer was wounded by a rock thrown at his head and two television crews were mobbed by ultra-Orthodox men enraged over the removal of signs demanding various forms of sexual segregation in public areas.

The outburst of violence has erupted as Israel celebrates the holiday of Channuka, children are off school, and many families use public transportation for day trips or to get to vacation destinations.

In a show of overt disunity between two of the most prominent female political figures in Israel, opposition leader Tsippi Livni and Likud Culture and Sports Minister Limor Livnat exchanged accusations over the partisan implications of the clashes.

In an interview with the news website Ynet, Livnat said of Livni:

"She never thought women's status was important enough, she only realized she was a woman on the eve of the 2009 elections. Did anybody hear her speak out against raising women's pension age? No! ... Suddenly when elections or primaries are approaching she remembers she is a woman."

In a sparsely attended meeting of women parliamentarians, Livni, who heads the opposition party Kadima, said that “the Netanyahu government is presenting a worldview and political agreements which facilitate all of the social phenomenon we are witnessing. It's not only a women's issue and not merely a matter of law enforcement, it is an entire moral and ideological system.”