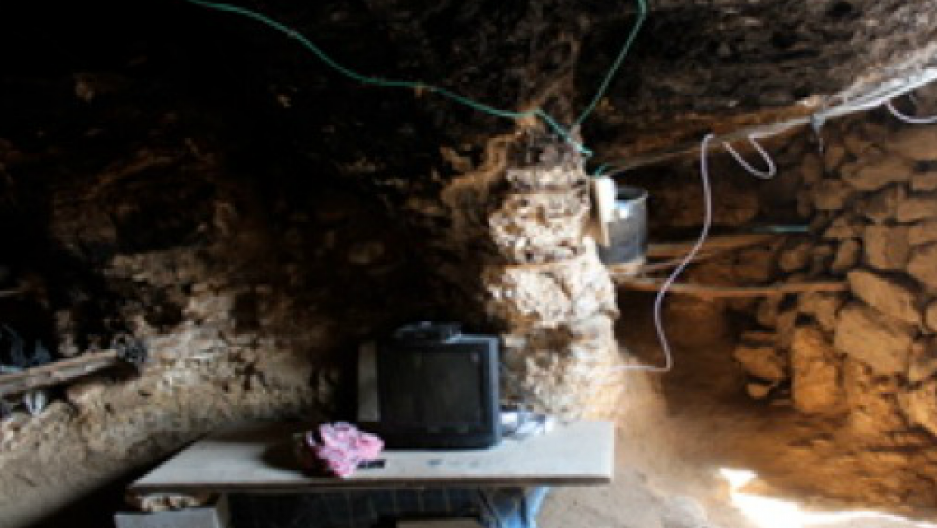 Some of the caves in Tha'le — people's homes — now have electric service because of the work of an Israeli company.

In remote regions of the West Bank, running water and electricity are a luxury.

Herding and poverty are a way of life. But now, a group of both Israelis and Palestinians are trying to turn that around.

Dhalia Shaham used to worry about where people would live, in Israel or Palestine, whenever the two sides reached a peace agreement. Now, she's far less worried about where and far more worried about how people live.

"The question is how people actually live and how their interests are taken care of and how they find ways to cooperate," she said. "And actually doing that work and finding out how this cooperation can take place and what are the limits of that cooperation is what I’m involved in."

At least once a week, Dahlia drives from her home in Herzilia, near Tel Aviv into South Mt. Hebron — a rural area filled with farms and agriculture. Her organization, Community Energy and Technology in the Middle East (COMET-ME), is working to install wind turbines and solar panels in small Palestinian and Bedouin villages, like Tha’le.

Tha’le is home to about a dozen families, typical of the area. They live in shanty-like tents and caves.

"A lot of them are in constant struggle to be able to hold on to the lands where they’ve been living for dozens of years," Shaham said.

From the outskirts of the village, a large power line is visible. It doesn't make a stop on Tha'le.

Elad Orian, in Israeli physicist, formed COMET-ME in 2009 to serve these communities using renewable technology. He has eight employees, half Israeli and half Palestinian.

"These are batteries that are specifically designed for solar applications for off-grid. The chemistry is specifically adjusted for that," he explained.

Sheep and goats are the livelihood of towns like Tha'le. With electricity, now, the women no longer spend three hours turning sheep's milk into butter. An electric churn can do it instead. Plus, they have refrigerators where the churned butter can be stored, rather than watching it melt back into liquid in the hot Middle Eastern sun.

More than a dozen communities have been wired by COMET-ME. COMET-ME hasn’t installed wind turbines in Tha'le, just 30 solar panels, because it's in the bottom of a valley. After they're installed, COMET-ME sends a trainer along to show what appliances can be used on the fragile grids: Cellphone chargers, refrigerators and light bulbs are OK. Tea kettles and warm water washing machines are a no-go, because they'll use too much electricity.

"In South Mt. Hebron, even if occupation ends tomorrow, and the Palestinian state starts extending its national grid, it would still take years before they actually reach those communities," Shaham said.

So these renewable generating stations are the only power these communities will see for years. Once the grid is up and running, operations will be left to the residents of Tha'le. Someone will become the electricity manager for their community. He'll be taught basic diagnostic care and upkeep for the system.

Each household will pay a utility bill, which goes toward subsidizing the cost of the program

"It’s not part of my work to talk about whether there’s gonna be peace or conflict. I’m in an island of peace. That’s where I work. And I'm not there because I’m Israeli and they’re Palestinian. I’m there because I have a function in an organization that provides them service," Shaham said.