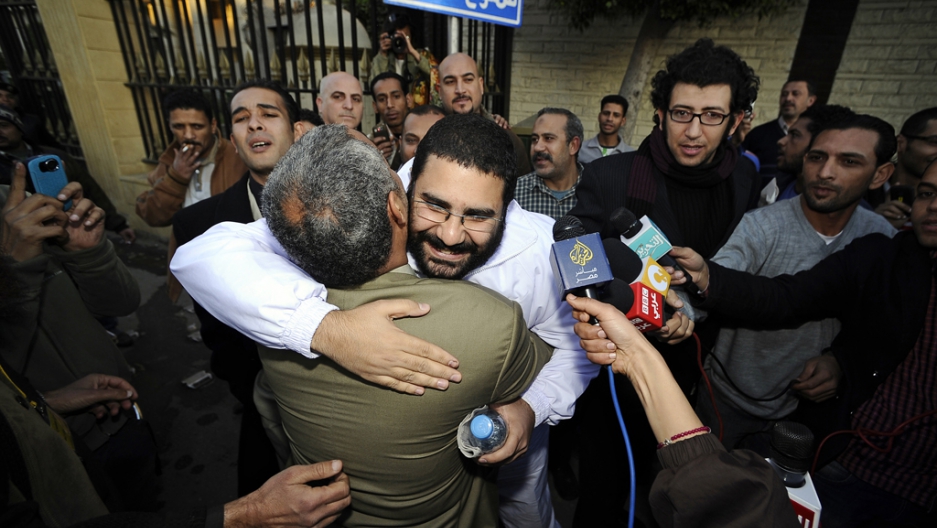 Alaa Abdel Fattah, who has been jailed for two months for "inciting violence," is greeted by relatives and friends after his release from police headquarters in Cairo.
Credit: Filippo Monteforte
Share

After being arrested in early October for "inciting violence" against the military, Egyptian activist and blogger Alaa Abd El Fattah was released from jail today.

According to Al Jazeera, Fattah was freed by Egypt's judiciary court and was welcomed by his family, friends, and followers.

He faced charges of vandalism when he participated in a demonstration held by Coptic Christians in Cairo.

During the protest, violence with security forces and military personnel broke out, and 25 people were killed.

"The young man reportedly refused to undergo questioning by the military prosecution on the grounds that the military itself was implicated in the case," Al Jazeera reported.

According to the Associated Press, Fattah greeted his newborn son, Khaled, upon his release outside police headquarters in Cairo.

Fattah's wife gave birth to their baby while Fattah was still in jail.

"His detention brought international condemnation," the AP reported. "Activists said it was evidence that the generals were following the same authoritarian policies as the deposed leader."

During his release, Fattah stressed the importance of ending military rule in Egypt.

According to The Guardian, Fattah helped "pioneer an online space in which opponents of the Hosni Mubarak dictatorship could organize and challenge the regime."

Fattah's family used his detention as an example to draw international attention "to the plight of thousands of civilians hauled by the ruling generals before military courts."

The family also noted that at least 12,000 more have been tried in military courts since late January.