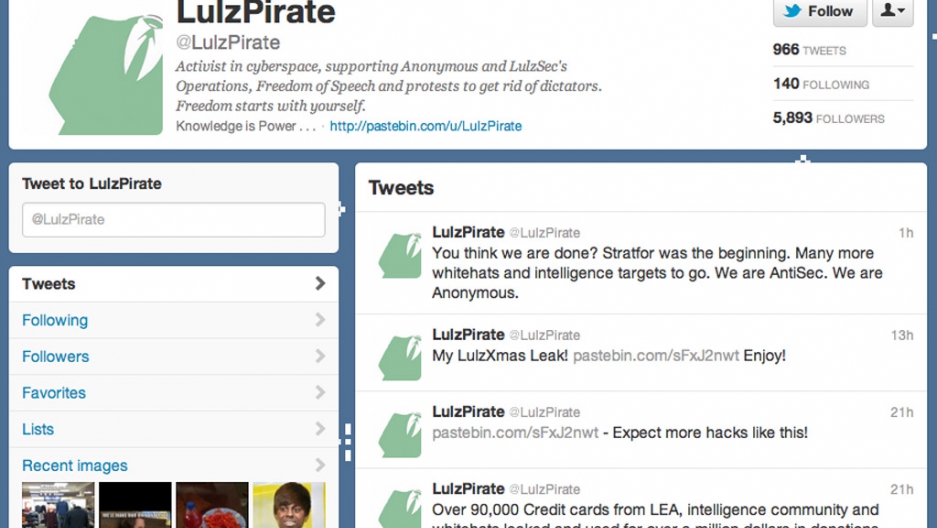 Anonymous, a collective of hackers, stole over 4,000 credit card numbers, addresses and e-mails from Stratfor, a US-based security think tank, on Sunday. They have promised a string of other hackings this week, the Associated Press reported, and boasted that they had stolen over 200 gigabytes worth of information.

Anonymous' goal, according to an alleged hacker, was to use the information to steal a million dollars and give the money away to charities as Christmas donations. Stratfor's client list includes The US Army, the US Air Force and the Miami Police Department, as well as other banks, law enforcement agencies, defense contractors and technology firms such as Apple and Microsoft.

Allen Barr, a recent retiree from the Texas Department of Banking, was one of the victims. Last Friday, he found that $700 from his account had been spent.

"It was all charities, the Red Cross, CARE, Save the Children. So when the credit card company called my wife she wasn't sure whether I was just donating," Barr, who wasn't aware that his information had been compromised when Stratfor's computers were hacked until a reporter called, told the AP. "It made me feel terrible. It made my wife feel terrible. We had to close the account."

Stratfor, which is based in Austin, Texas, sent an e-mail to its clients alerting them that it had shut down its server and e-mail upon learning it had been hacked.

Anonymous also posted a link on their Twitter to the e-mail address, phone number and credit card number of Cody Sultenfuss, a US Homeland Security employee. Sultenfuss told the AP he had no warning before his information was posted.

Anonymous said it was able to get the information from Stratfor because the company did not encrypt their clients' credit information; an easy-to-avoid mistake which would be a serious embarrassment for an intelligence firm.