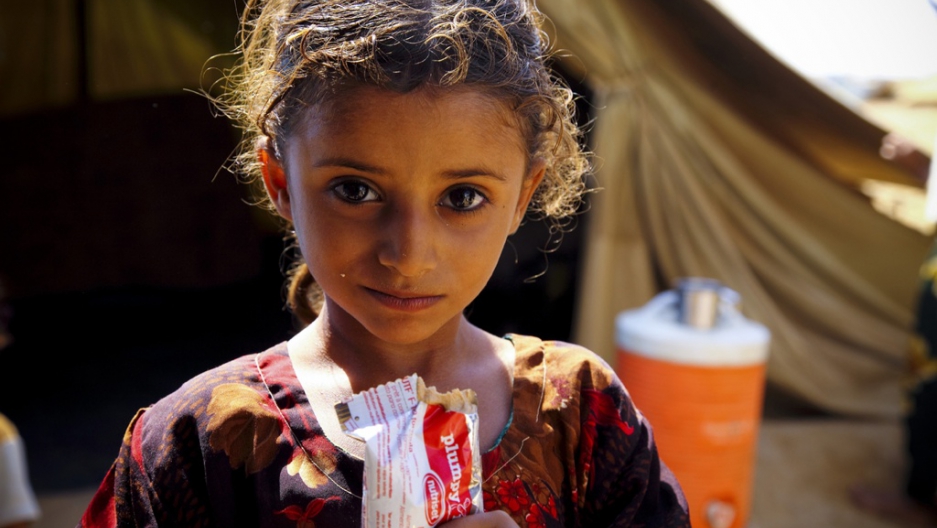 While staying in a camp for war displaced, Shamha as-Saadi, 5, was diagnosed malnourished and given a pink wristband to wear to show she has not been getting enough to eat.
Credit: Skyboat Films
Share

SANAA, Yemen — There is no famine in Yemen. There are no vultures looming over skeletal babies. No film cameras to record flies landing on hollowed faces. No pop concert to raise awareness.

Hunger in Yemen is not photogenic, but is rather the unfulfilled potential, lost dreams and gnawing pain passed from one generation to the next.

Yemeni children don’t grow up to be big and strong. A shocking 58 percent (just 1 percent behind the worst rate, Afghanistan) grow up stunted, physically and mentally less than their potential.

More than one in three children are severely stunted, according to a recent report by Oxfam calling for urgent action by international donors to assist communities “on the brink of disaster” in the Arab world’s poorest country.

Even before Yemen plunged into chaos this year with President Ali Abdullah Saleh defying mass protests to end his 33-year rule, rates of malnutrition were the third highest in the world, higher than anywhere in sub-Saharan Africa, behind only India and Bangladesh, according to the World Food Program.

Hunger in Yemen begins in the womb and continues to blight the lives of one-third of the population, more than 7 million people.

One-quarter of Yemeni women between the ages of 15 and 49 are acutely malnourished, according to UNICEF, the UN’s children’s charity, which has led to some of the world’s lowest average birth weights.

Despite this, Yemeni women have more babies than their counterparts in almost any other country, an average of 6.5 children per woman.

In this “silent emergency,” as aid workers describe it, women suffer miscarriages, children are taken out of school to earn money and girls are married off early. Their fathers, unable to find work to provide for their large families, chew the mildly narcotic Qat plant to quell their hunger.

And although billions have been pledged to assist other nations emerging from the Arab Spring, the UN’s Yemen Humanitarian Response Plan calling for $290 million, much of it “life-saving” assistance for Yemenis displaced by conflict, remains only just over half-funded.

“In neighboring Somalia, we have seen what happens if warnings go unheeded, and too little is done in time to stop a crisis,” said Valerie Amos, UN under-secretary-general for humanitarian affairs and emergency relief coordinator. “Let us not repeat the same mistake in Yemen.”

Living on the margins

Deep in the highlands of Rayma, 100 miles southwest of Sanaa, the area known as Bilad at-Taam — the land of food — is one of the hungriest places in Yemen, where an average of half of all families suffer acute and chronic hunger.

Standing at the edge of his family home — a single stone room built on hot, arid land beside a straw covered shelter and an outdoor clay oven — Abdo Abdo al-Amry proudly introduced his 14 children.

Their smiling faces show little sign of the starvation the world has come to know from African famines. Yet Amry’s children are chronically malnourished, their legs bony and thin, and their bodies smaller than is healthy for their age — the outcome of years of growing up never having enough to eat.

Eking out a living as a motorcycle taxi on a bike borrowed from a friend and from the meager crops his small plot of land produces, Amry earns less than $2 per day, the income of nearly half of all Yemenis.

With grandparents and sisters sharing the home, Amry has a total of 20 hungry mouths to feed. The most the family can afford is flour to bake their own bread, eaten three times a day, occasionally supplemented with okra, a local vegetable, if the market price is right.

The health costs of such a monotonous diet are severe. Several of Amry’s children have developed anemia from lack of vitamins and minerals and have required blood transplants at hospital.

“Because she was very weak I had to give this girl blood three times,” said Saeda, Abdo’s second wife, hugging a small girl in her lap.

“And this one,” she said pulling another of her daughters close to her, “I had to give her blood one time. And the eldest, I gave her blood once as well.”

Four of Saeda’s children died: Her 8-month-old baby as a result of dehydration, and three fetuses miscarried.

Between 2006 and 2009, economists estimated the effect of the “Triple F Crisis” — increasing food prices, declining fuel revenues and the financial crisis drying remittances from Yemenis working abroad — increased poverty in Yemen by nearly 25 percent, wiping out decades of development.

Since the beginning of the year the political stalemate caused by the uprising has only compounded those losses further.

Fuel prices have risen more than 500 percent of pre-crisis levels, according to the UN's Office for the Coordination of Humanitarian Affairs (OCHA), impacting farmer’s ability to irrigate their land using pumps and increasing the cost of transporting food to market, leading to an average increase in food prices of 46 percent since the beginning of the year.

One-fifth of those interviewed by Oxfam said they had lost their jobs without finding new ones and half said that they were facing decreased incomes compared with the previous six months, making food difficult to afford.

As a result, nearly one in five said they had taken their children out of school to help the family earn their daily bread and nearly two-thirds were skipping meals. Other households said they were selling off items of value in order to buy food.

Adding a further layer to Yemen’s hunger crisis is the mass displacement of families from areas of ongoing conflict. An estimated 300,000 people were displaced by the five-year war between Saleh’s forces and the Huthi rebels in the north, while a further 100,000 have been uprooted due to instability in the south, where Saleh’s forces led a brutal crackdown on a secessionist movement.

Meanwhile, OCHA says up to 40,000 people have been displaced to the coastal city of Aden and the southern governorate of Abyan as a result of fighting between government forces and Al Qaeda-linked militants.

Facing a $60 million shortfall in its 2011 budget for Yemen, the World Food Program (WFP) said it may no longer be able to distribute food rations to the displaced in Aden, let alone reach the millions of ordinary Yemenis going hungry across the country.

But even as aid agencies sound the alarm on an imminent humanitarian crisis, the effects of hunger on the impoverishment of Yemeni society will continue well beyond empty bellies at bedtime.

Amry’s eldest son, 9-year-old Majd, walks the five kilometers to school each morning. But his two younger sisters Naema and Salama no longer join him.

“Our Dad withdrew us because we didn't have any clothes or books,” Naema said, leading a donkey down to the well to fetch water.

“We wash dishes, bake, cook and clean. We would love to be studying in school instead of staying at home,” Naema said. “With school you can be a doctor, but without school you cannot.”

To create an incentive for girls to go to school, WFP used to provide a sack of wheat to families like Amry’s if their daughters regularly attended classes. The wheat handed out once a term off-set the cost of school books and of not having the girl working at home.

But facing critical budget shortfalls, WFP was forced to end its “Food for Education” program in Rayma, and Amry no longer saw the point of paying for the cost of his daughters’ education.

“I withdrew them because they stopped giving us wheat,” he said. “So it is better to keep them at home rather than going to school. If there is wheat, they can go back.”

With no classes to occupy them, Amry said he would soon be searching for husbands for Naema and Salama, eager to earn the best dowry possible for marrying off his daughters, around $1,000 each if they married into another poor family.

And so, uneducated through lack of food, Naema and Salama will join the 70 percent of Yemeni women who are illiterate in the nation that has consistently ranked lowest in the Global Gender Gap index.

They will also be among the half of Yemeni girls from their area married before they are 15. And lacking education and empowerment, it is more than likely Naema and Salama will each bear many more children than their much elder husbands can ever afford to feed, ensuring the cycle of hunger continues into the next generation.

“My father made me study and my ambition was to be a doctor,” Saeda said.

“I studied in Saudi Arabia and then the crisis happened and we left. We came here but we couldn’t continue school because we didn’t have clothes, books or pencils. My father couldn’t afford all of that. So he asked us to leave school. She feels sorry in her heart,” said Saeda, looking over at her young daughter. “And I also regret that I couldn't finish school. But what can I do?”