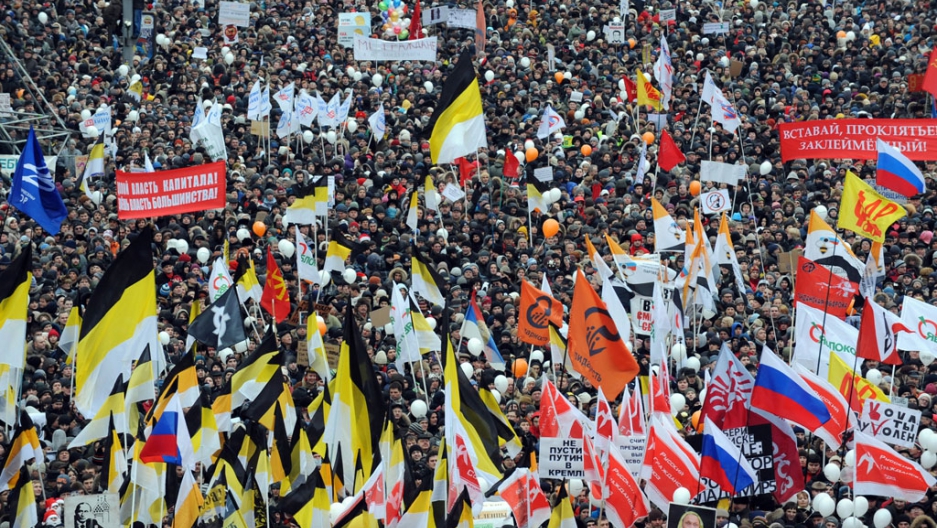 Russia's opposition leaders are holding fresh rallies Saturday, drawing tens of thousands of people into central Moscow to protest against the December 4 parliamentary election, which they claim was fraudulent, Al Jazeera reported.

More from GlobalPost: Russia's opposition: Who could take down Putin?

The demonstrators are demanding a re-run of the vote, in which the United Russia party of Prime Minister Vladimir Putin suffered big losses, but managed to hold on to its majority in the State Duma, the lower house of parliament.

In the capital Moscow, a coalition of opposition forces organizing the protests says as many as 50,000 people are expected to converge on Sakharov Avenue. An Agence France-Press report estimated the crowd at 40,000 people by early afternoon.

Thousands more are people expected to join marches in Vladivostok and more than 90 other towns and cities across the country, which encompass a total of nine time zones.

"I see enough people here to take the Kremlin and [Government House] right now but we are peaceful people and won't do that just yet," he said.

Navalny, an anti-Kremlin blogger, was released from prison Wednesday after he was arrested during a Moscow demonstration December 10. That march was said to be the biggest anti-government protest since the fall of the Soviet Union.

The Russian President Dmitry Medvedev on Thursday promised political reforms, including a proposal to hold direct elections of regional governors, the BBC reported.

But has failed to appease protesters, who are demanding a full re-run of the December 4 polls.