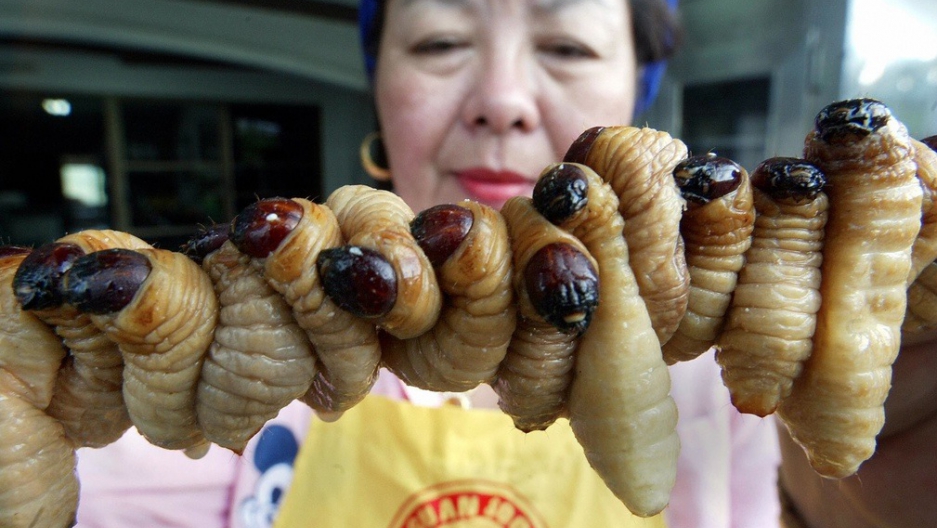 Grubs on the barbie: It's a delicious dish in Thailand. Why not the Netherlands?
Credit: Pornchai
Share

WANGENINGEN, Netherlands — One billion people on earth are currently starving. But Arnold van Huis says the solution to food security is right beneath our feet.

We must eat bugs, he says.

If you can’t quite stomach the idea of summoning the family to a festive holiday meal of sauteed scorpion with corn-borer cornbread and cabbage and cricket salad on the side, just wait.

Van Huis is one of the world’s preeminent researchers and advocates of eating insects. An entomology professor at Wageningen University in the Netherlands, he believes that bugs are the meal of the future.

He and his colleagues say it’s only a matter of time, not of taste nor temerity, before we’re all gazing upon our backyards as burgeoning bug buffets.

“People will certainly do it when they find out it’s very sustainable,” he said.

Now, van Huis is working to convince the Western world to join the other 80 percent of the planet that already sees insects as an integral and attractive part of its diet.

More Futurists: Getting up-close with volcanoes

He has several arguments for why people should start munching bugs — they’re environmentally friendly and improve the quality of nutrition, he says. Ultimately, people may turn to bugs for no other reason than economics.

Beef, for example, is simply getting too expensive as a food staple, van Huis said. “The FAO [United Nations Food and Agriculture Organization] has already predicted that only rich people will be able to buy [beef] in 20 years’ time,” he said.

The European Union announced in June that it would award more than $4 million in grant money for research into insects as a protein source. Wageningen University is competing for some of that EU cash.

Not everyone’s on the bug bandwagon. A member of the European Parliament from the generally anti-EU United Kingdom Independence Party railed against the whole concept being promoted by “wastrel bureaucrats.”

“I think it’s scary just how much time the European Commission spends dreaming up nonsense ideas to waste taxpayers’ money,” said Paul Nuttell. “Roasted scorpions and pan-fried locusts might be great if you are starving and have no choice. But for heaven’s sake, civilization has actually moved on from a Stone Age diet.”

A buggy diet is better for you, Van Huis says. Insects generally contain between 30 and 70 percent protein, as well as significant amounts of essential fatty acids, B vitamins and minerals such as iron and zinc.

The FAO has calculated that dried caterpillars have a higher proportion of protein and fat than beef and fish, which gives them a high energy value. They’re also a great source of vitamins and minerals.

On a recent afternoon, a Ph.D. candidate at Wageningen, Dennis Oonincx, measured out portions of different powders made up of substances like brewers’ yeast, leftover cookie crumbs and cast-off potato peelings to boxes of writhing mealworms.

The bugs will be put into a deep freeze, then “harvested” and analyzed. Oonincx is also painstakingly tracing the life cycles of the products he’s feeding the worms, including counting the costs of everything, as well as the gas to transport it.

Oonincx also does his part to promote insect consumption at home, feeding crickets dusted with cinnamon sugar to his poker buddies, who he says have become big fans. He suggested to his girlfriend they include some bug-based dishes in the family Christmas dinner but said although she eats insects too, she didn’t bite.

Advocates acknowledge that to overcome resistance to making things like mealworms a regular dish, it’s going to have to be disproportionately delicious.

Marian Peters and her partners at Venik, a consortium of six Dutch insect producers, are working on that.

Peters spends a lot of time in the “Restaurant of the Future” on Wageningen’s campus, where Chef Johan Verbon and trainees concoct various delicacies with insects. He says grinding them up in pasta sauce is the best way to serve them.

He’s crunching on freeze-dried grasshoppers — “first you have to take off the wings and legs” — and a pan of chocolate candy topped generously with mealworms sits nearby.

“The worms add a bit of a nutty flavor,” Peters said. Her favorite is the mealworm trailmix she snacked on while talking. She and Verbon talk briefly about what to do with a batch of buffalo-worm meatballs in the freezer.

Peters has no doubt her team can concoct tantalizing dishes that will win over consumers — if they get over their hesitation to take the first bite.

A quick attempt to get a few bystanders in the “Restaurant of the Future” to chomp on a freeze-dried grasshopper, however, went 0 for 3.

Peters says attitudes are changing, though, both according to consumer polling her organization is conducting and to public interest. Venik sends representatives into schools to talk about insects as a food source, hoping to head off kids from ever building up the mental resistance of the “ick factor.”

Since the market is so small, production costs are still very high, making bug protein far too expensive even for those who might be willing to try it. And at the moment, even beef is cheaper than mealworms because of the expensive freeze-drying process used for the limited product range.

Van Huis expects widespread change in European society may take a decade or two, but he doesn’t doubt it’s underway. He’s organizing an expert-level conference at FAO headquarters in Rome in January, where there will also be representatives of industry wanting to get in on the ground floor of the bug market.

So while European holiday-makers may not be putting plump braised queen termites on their meal tables yet this year, Van Huis says, “We will be putting this on the food agenda.”