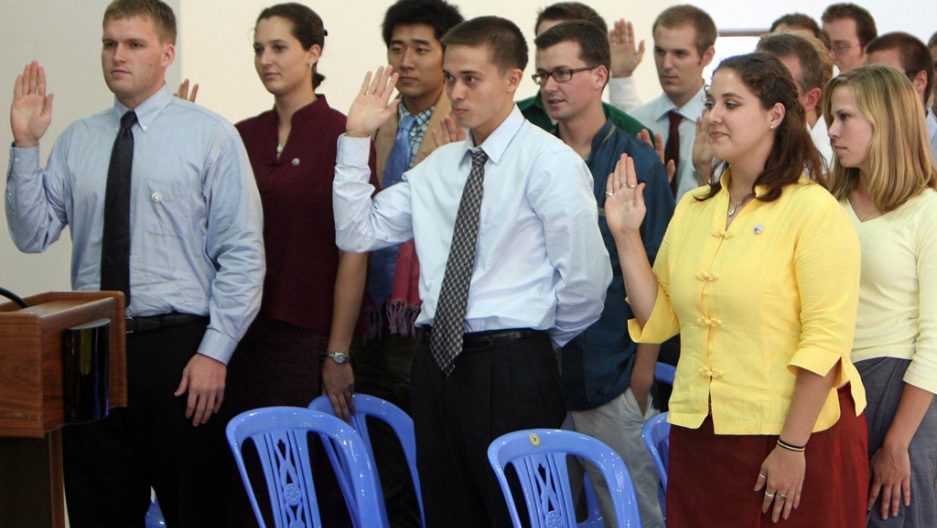 Volunteers during a Peace Corps swearing-in ceremony at the National Institute of Education in Phnom Penh. Today, the organization announced plans to scale back its efforts in South America due to increased violence.
Credit: Tang Chhin Sothy
Share

Due to general safety concerns, the Peace Corps will withdraw 158 of its members from Honduras.

According to The Christian Science Monitor, the organization, which has volunteers in 75 countries, will also stop sending new recruits to Guatemala and El Salvador.

Although violence is not specifically targeted at Peace Corps volunteers, they could be caught in the crossfire.

Recently, one volunteer was shot in the leg in Honduras during a bus assault.

The director of the Peace Corps, Aaron S. Williams, said that the "safety and security of all Peace Corps volunteers is the agency's highest priority," the BBC News reported.

Read more from GlobalPost: Peace Corps pulls out of Kazakhstan

Plans to send 29 recruits to Honduras in order to finish their training have been changed.

However, the 222 volunteers in Guatemala and the 113 volunteers currently in El Salvador will remain.

According to The New York Times, the three countries have "endured a rash of violence primarily related to drug traffickers using Central America as a staging point to ship cocaine to the United States from South America."

In addition to last month's murder of Alfredo Landaverde, Honduras' former anti-drug and security adviser who advocated against corruption, the country has the highest murder rate in the world.

The BBC estimates that Honduras has 82 killings per 100,000 people a year.