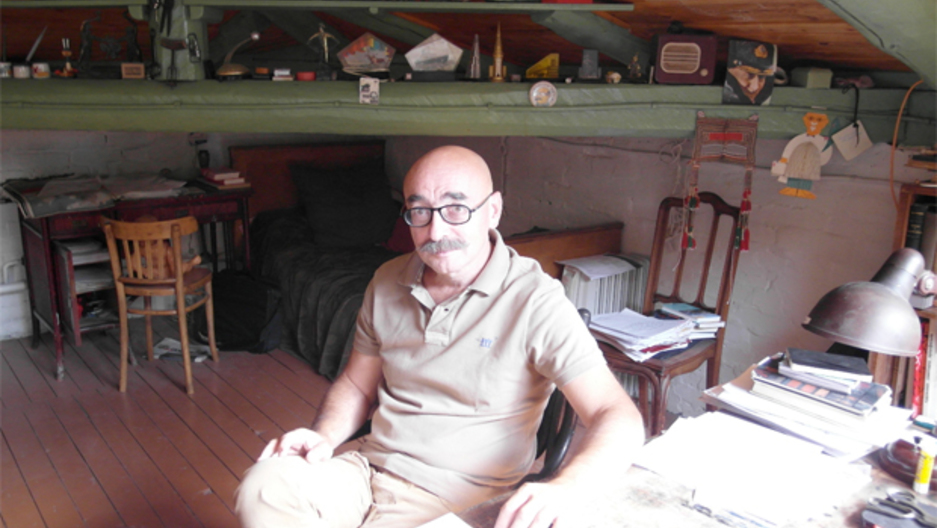 Andrei Bilzho and the interior of his Soviet restaurant. (Photo: Brigid McCarthy)

Share
Petrovich serves Soviet nostalgia with a twist of irony. The menu at the downtown Moscow restaurant offers old staples like herring with onions, dark rye bread, and sautéed cabbage with meat, washed down with a glass of compote – all this for the equivalent of just a few dollars. But what really draws customers is the décor. The walls are plastered with Soviet memorabilia: boxy, wood-paneled radios, fishnet shopping bags, bright red tins for flour and rice that were fixtures in every Soviet kitchen. A Soviet-era payphone in the hallway looks like it came straight out of the Stone Age. In the evening, Petrovich turns into a club, with dancing to golden oldies. Twenty years after the end of the USSR, Soviet nostalgia is big and getting bigger all the time. Andrei Bilzho, one of the owners of Petrovich, is quick to point out that nostalgia isn't the same thing as memory. It's selective, and emotionally tinged. So when people say they're nostalgic for the USSR, Bilzho always asks them which era in Soviet history they mean, because every period was so different. "For instance, in Stalin's times, both of my grandfathers were executed and my grandmother was sent to the camps. So I don't have any nostalgia for that time or for communist ideology," Bilzho said. Bilzho's is more of an artist's nostalgia for the everyday objects of Soviet culture: Young Pioneer uniforms; Father Frost figurines – the Soviet version of Santa Claus; cigar boxes with Sputnik themes; artifacts of an entire culture that vanished when the Soviet Union died. Bilzho, who's a former psychiatrist turned political cartoonist, said nostalgia for the Soviet Union began bubbling up in the late 1990s when Russians started comparing communism to capitalism, "especially when people started to realize that not everything in the Soviet Union was bad, and that there were actually quite a few good characteristics." Bilzho said for all of its deprivations, life was much more predictable back then. "Because it was pretty clear: you were born, you went to college or got a job, got married, and died picking strawberries at your dacha." He said there was also less corruption: "People are actually seeing that the communist leaders didn't steal as much as the current leaders do." Andre Grachev, who was Soviet leader Mikhail Gorbachev's press secretary, said he thinks it's only natural that Russians are increasingly nostalgic for communism, "especially facing the extreme brutality of the model of capitalism which was imposed on this society which was not at all prepared." In the 1990s, tens of millions of people lost their jobs and life savings. Boris Kapustin, a visiting professor at Yale University, said Russia's post-Soviet leaders also dismantled the country's social safety net. The Soviet system "was not perfect at all, by any standard," Kapustin said. "But nonetheless it shielded millions and millions of people from abject poverty." Kapustin said he thinks Russians aren't really nostalgic for the USSR. "They're not actually mourning the disappearance of the nation. They're mourning their actual present condition which has deteriorated in many ways," he said. The sudden death of the Soviet communism has also left many Russians profoundly disoriented. "Especially for the older people, for millions of people, there's a feeling of losing their identity," said Valery Khazin, a writer from Nizhniy Novgorod. "A lot of my relatives feel the pain, almost a physical pain, that we were so great, we used to be so powerful, so influential, and we lived in the best country in the world, the most progressive, and all that. A lot of people did believe in it." Andrei Bilzho, ever the psychiatrist, believes that despite all the dramatic changes in Russia, the current nostalgia craze actually stems from something much more ordinary. "I think for most people, they don't realize it, it's a nostalgia for themselves, when they were young, and they just can't figure it out," Bilzho said. Bilzho said he thinks the l960s were the high point of the Soviet era, in terms of science, culture, and education. The country was also starting to open up, after the terror of the Stalin years. "At that time, if the authorities had been more decisive and less timid, and they'd allowed a little bit of private ownership, and had opened the borders so people could go abroad more, I think the Soviet Union would have survived." Bilzho added that that's what Mikhail Gorbachev, the Soviet Union's last leader, was trying to do. He was just 30 years too late.