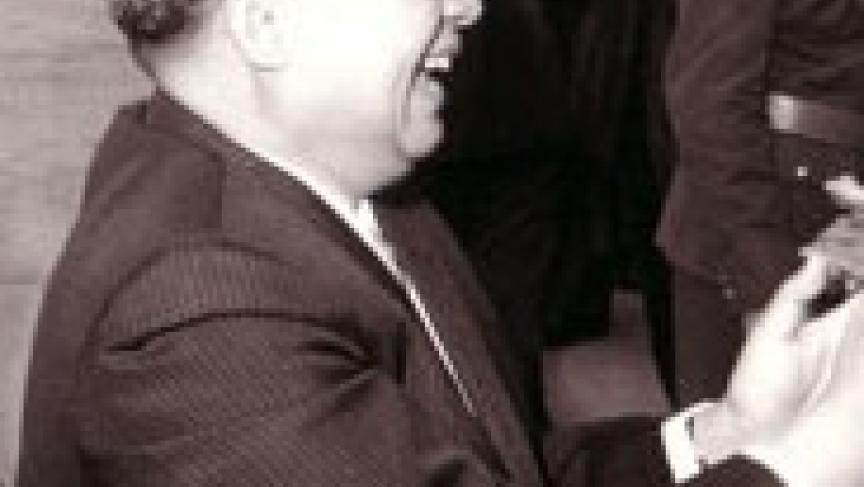 Share
Mourning continues in North Korea, with copious public weeping, and a steady stream of visitors past the glass sarcophagus where deceased leader Kim Jong Il lies in state. His son, Kim Jung Un, now faces the prospect of taking up the mantle. The young Kim is in his late 20s, and it's expected he'll get a fair amount of guidance from relatives and other advisers in the tight knot of collective leadership. But for encouragement in blazing his own path, he might want to look at the record of someone who came to power at an even younger age. When Norodom Sihanouk became king of Cambodia in the early 1940s, the French colonial government breathed easy. Here was an 18-year-old playboy prince, they could easily manipulate. Or so they thought. A dozen years later, Sihanouk sent them packing, and declared Cambodia an independent, non-aligned state. That such a young leader could so defy expectations might be an encouraging thought for young Kim Jung Un, as he ponders his future. This week, Kim Jong Un paid his respects to his father, lying in state, strolling in with his stylish semi-shaved haircut, his black suit filled out by many a good meal. Behind him stood the party elders who may support and guide him — or, may try to manipulate him, as the French tried with Sihanouk. Behind him stood the party elders who may support and guide him — or, may try to manipulate him, as the French tried with Sihanouk. Sihanouk happens to be a long-time friend of North Korea. North Korea's first leader, Kim Il Sung, gave Sihanouk a villa in Pyongyang, which he used often. Kim also gave Sihanouk use of a North Korean film crew, and in the 1960s, Sihanouk would make movies starring himself, his wife and children, and his ministers. The storylines of these films tended to be similar — a handsome young prince learns about a plot to bring him down, and through his ingenuity and righteousness, puts down the threat and preserves peace and happiness in his kingdom. By the time these films were made, in the '60s, Sihanouk had been in power for a quarter century, and it was kind of going to his head. He'd been so good at outmaneuvering the French, he tried to do the same thing by playing opposing sides off each other during the Vietnam War. That included letting Vietnam ship weapons across Cambodia, which led to the US bombing Cambodia. In Australian filmmaker Jim Gerrand's "The Prince and the Prophecy," Sihanouk explained what he was trying to do. "I did not want to do harm to the United States. I like Western culture…My wife is half-French, half-Cambodian. No Vietnamese blood. And I did not consort with any Vietnamese girl when I was a playboy," Sihanouk said. But he added, "By patriotism, I had to help the North Vietnamese, and I got their promise to respect always Cambodia as an independent state." That's not quite how it worked out. Sihanouk's general, Lon Nol, didn't like how Sihanouk was cozying up to the Vietnamese. So Lon Nol staged a coup, and Sihanouk was out. The Chinese then persuaded Sihanouk to become a figurehead leader of the communist Khmer Rouge. Many Cambodians joined him — because they revered Sihanouk and wanted him back in power. But this time, it was the Khmer Rouge who outmaneuvered him. They used him to come to power, and once there, they put him under palace arrest and killed several members of his family. Almost two million other Cambodians also died under Khmer Rouge rule. Still, years later, Sihanouk told filmmaker Jim Gerrand he stood by his record. "I do not think that I make serious mistakes. May I quote?," he said, reaching for notes he had on his lap, from something a diplomat had said about him. 'Sihanouk made mistakes like any other man, but he was a fantastic diplomat and a great nationalist. He kept his people happy, well-fed and at peace by walking a very thin tightrope between the big powers.'" Kim Jung Un has a little tightrope walking of his own to do now. So the lessons for him? Use low expectations to your advantage, and do it early. Don't make deals with China without thinking carefully about the consequences. And don't get too drunk on your early successes. In the end, Sihanouk failed in his own tightrope walking, and Cambodians suffered for it. North Koreans are already suffering. They can only hope their new young leader offers them something better.