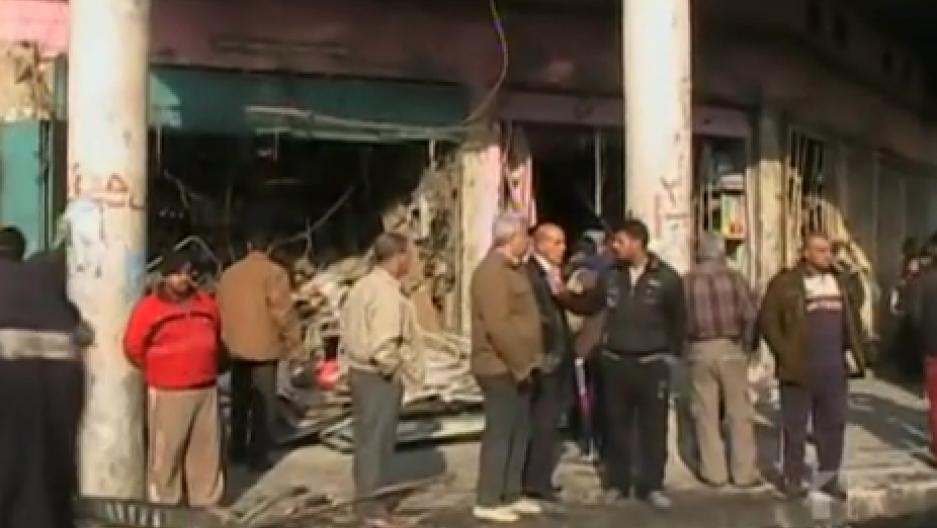 Dozens were killed and scores more wounded in a coordinated bomb attack across Baghdad during rush hour on Thursday. (Photo from ABCau video.)

A series of 14 bomb attacks, apparently coordinated, in Baghdad today ed Iraqi officials to declare it the worst day of 2011.

At least 63 people are dead and more tha 180 are wounded as signs emerge that the political crisis facing the government of Prime Minister Nouri al-Maliki may be spilling into the streets. The violence comes just days after the last U.S. troops pulled out of Iraq and into neighboring Kuwait. American officials have said the soldiers in Kuwait could return to Iraq rapidly if the situation spiraled out of control, but so far there's no reason to think that's the case.

According to the New York Times, insurgents used car bombs and IEDs to strike at grocery stores, schools and government bombings in neighborhoods all around the capital city. No group has claimed responsibility for the attack but they bear the hallmarks of previous work by the group Al Qaeda in Iraq.

“This has nothing to do with the American withdrawal,” Abdul Kareem Thirib, the head of the security committee for Baghdad’s provincial council, said to the Times. “When they were here, there were also explosions. We were the ones in control of the streets when the Americans were here. I think there will be more cowardly attacks in the coming days but we will face them and everything will be under control.”

The sectarian problems have been increasing since the government of al-Maliki, a Shiite himself, issued an arrest warrant for Vice President Tariq al-Hashemi, a Sunni and one of the most political influential Sunnis in the country. He's accused of running a death squad, though many Sunnis view it as a political ploy to force the Sunnis from power.

The BBC reported that the al-Iraqiyya group, the main Sunni group in parliament, is boycotting the assembly in protest.

"Maliki will drive Iraq towards separation and will create a new dictatorship and take on Saddam's mantle," Ali Hatem Suleiman, the leader of one of the nation's largest Sunni tribes said to the BBC. "Unfortunately this was all agreed upon by America - to hand over Iraq to a new dictator, and so Iraq will implode again."

al-Hashemi is believed to have fled to the semi-autonomous Kurdish region in northern Iraq.