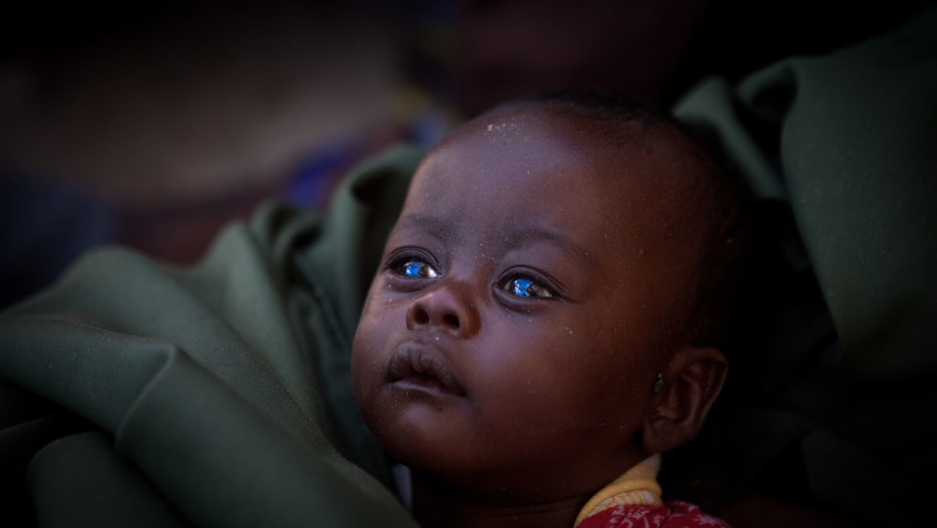 A child waits with his mother at a food distribution site in Mogadishu run by the Somali Relief, Rehabilitation Development Organization (SORRDO).
Credit: Nichole Sobecki
Share

MOGADISHU, Somalia — Somalia’s prime minister denies that people are starving in the capital Mogadishu, contradicting the United Nations and the squalid evidence of the growing camps of visibly malnourished people that litter the city.

“I don’t believe there is a famine in Mogadishu,” Abdiweli Mohamed Ali told GlobalPost in an interview at his guarded hillside residence.

“I have no clue what they are talking about. Enough relief came to Somalia and we provided enough relief to those affected by the famine,” said the US-trained economist.

After years of civil war and seasons of failed rains, in July the UN declared a famine in three parts of southern Somalia controlled by Al Shabaab, an Islamist group allied to Al Qaeda that battles Ali’s Transitional Federal Government (TFG) and had blocked access to many Western aid agencies.

By September the famine had spread into another three areas of Somalia, tens of thousands had died and a further 750,000 faced starvation. But last month food aid and rainfall had begun to improve the situation, leading the UN to downgrade the famine in some areas, but not in the camps full of desperate, hungry people that spill out of vacant plots and shot-up buildings across the capital.

Ali said aid agencies were exaggerating the extent of the crisis for their own gain describing them as "lords of poverty" in reference to a book of the same name that chronicled corruption and waste in international aid programs.

“The aid agencies became an entrenched interest group, they say what they want to say. I don’t want to accuse them but the statistics they use sometimes don’t make a lot of sense to me. We are moving from famine to recovery,” Ali insisted.

The prime minister is keen for foreign powers such as the US that bankroll his weak regime to see his government as credible, one that has made military gains against the Islamic extremists of Al Shabaab and is bringing stability to a city that has been mired in violence and chaos for more than 20 years.

His denial, which echoed a similar repudiation by the Shabaab when famine was announced this summer, underlines the intensely political nature of food crises in which no administration wants to be seen to be responsible for allowing famine on its watch.

But in Mogadishu's more than 300 camps, home to over 185,000 internally displaced people, the suffering is little different from the height of the famine this summer and residents say what improvement there is has little to do with the government.

In the weeks before famine was declared Dhahiro Abdalle left her rural home for the capital. Drought had killed her livestock and withered her crops; Al Shabaab had terrorized her family.

Since then her home has been a stick shelter covered with cardboard and plastic sheeting in Maajo, an informal settlement in Mogadishu where more than 18,000 other desperate and hungry people live.

“I have never seen the government here. If [the prime minister] says there is no famine here that is not true,” said Abdalle as her newborn son, just four days old, dozed fitfully on a straw mat by her side, flies buzzing around his head.

Another woman, Faiza Ibrahim, sat cradling a child in the dirt outside a dome of sticks and scrap just inches from her neighbor’s hut. Acrid smoke from a burning rubbish pile blew with the dust between the rags that plaster her makeshift home.

“Since I came six months ago the situation has not changed. I haven’t heard anything about the government or any officials coming to help us. They know we exist but do nothing about it,” she said.

Dismayed by the prime minister’s comments, aid workers in Mogadishu say that while things are improving the emergency is far from over.

“When we started [in August] there was a lot of severe, acute malnutrition. It has improved but new cases are still coming everyday,” said Abdifatah Ahmad, a nutrition officer with the Somali Relief, Rehabilitation and Development Organisation (SORRDO).

At the feeding center the relief group runs, opposite the old American embassy, infants are weighed and their height measured to determine their level of malnutrition. Sacks of food donated by China via the World Food Program (WFP) are distributed to the parents.

An open-air kitchen made up of dozens of huge tin cauldrons provides porridge and soup for 6,000 people who line up each day.

Last week the UN made a new appeal for $1.5 billion to fund emergency and relief work in Somalia in 2012 describing the humanitarian crisis as “the largest in the world.”

“The situation on the ground here has improved on the humanitarian front since the start of the famine," said Ari Gaitanis, a spokesman in Mogadishu for the UN Office for the Coordination of Humanitarian Affairs, to GlobalPost. "But it's still unacceptable and we have to do more.”