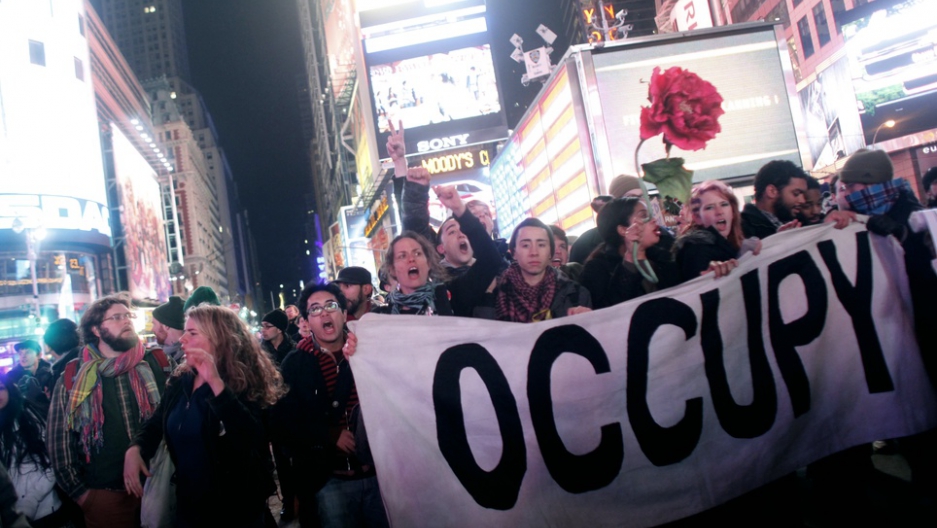 OAKLAND — In between facing off with riot police over tent cities and disrupting port traffic along the West Coast, Occupy protesters have managed to rake in some serious cash.

But as protesters nationwide are evicted and cold weather sets in, recently released data from Occupy Wall Street in New York shows donations there have begun to dwindle. That could suggest public support is waning without the visible reminder of a public campsite to keep people engaged.

It also raises some questions, still unanswered, about what the protesters in New York and elsewhere will do with the money that’s left.

An evaluation of financial data provided by several Occupy movements across the country, together with an analysis by WePay, the protesters' favored donation site, offers a picture of the kind of people supporting the movement and how the money has been spent so far.

Read more: A coordinated "Occupation" on the West Coast

At the height of the fall protests, someone was making an online donation to an Occupy movement every 30 seconds, according to an analysis by WePay. Daily contributions to the original anti-Wall Street protesters in New York regularly topped $15,000 in October and rose as high as $37,000, data from the group’s accounting team shows. That doesn’t include cash collected on site, which is not included in the data.

Demonstrators in New York have raised nearly $680,000 since hundreds marched through Lower Manhattan in September and staked their claim on Zuccotti Park.

The money flowed in after police clashed with protesters as they dismantled their encampment in mid-November. In the days leading up to the clashes, daily contributions hovered in the low thousands. On Nov. 15, according to Occupy Wall Street figures, supporters gave $18,000.

But the accounting data also shows donations made by check and credit card have tapered off in the last two weeks. On Dec. 13, contributions fell to a low of $98.

In Boston — where supporters have given more than $100,000 — finance working-group member Greg Murphy said that in addition to stripping the movement of a central space to interact with the public, the movement’s Dec. 10 eviction has had a financial toll of $200 to $1,500 in daily cash donations that used to come in on site.

Read more: OWS: What does it mean?

Murphy said protesters have been somewhat scattered since being ousted from their campsite, with general assemblies — the meetings where protesters make decisions — being held in four different churches and working groups spread across the city.

“We need to be in one central location. … We want to remain very visible, very public,” Murphy said.

Compared to the hefty bank accounts of big cities like New York and Boston, most occupations have raised modest sums. But many still have sizeable amounts for loosely organized groups that have made little effort to fundraise and in some cases, haven’t even set up their own bank accounts yet.

Occupy Oakland has collected about $31,000, although much of that has been spent or earmarked for expenditures.

While contributions had generally slowed since the first weeks of the occupation, Lesley, a member of Oakland’s finance committee who asked to be identified only by her first name, said the group saw an uptick in donations around Dec. 12 — the day protesters brought traffic at the Port of Oakland to a standstill for the second time in recent weeks.

In the college town of Eugene, Ore., protesters have reported raising about $9,000, mostly in cash.

So what did they do with it all?

The money raised by occupiers has been spent on the basics, such as food, tents and portable toilets, as well as bail bonds.

Local practices vary, but typically any expenditure over $100 must be approved by 90 percent of protesters in a general assembly.

In New York, protesters doled out $3,000 for supplies to make Halloween puppets, $1,100 for herbs — the legal variety — and $19,200 for tents. Other expenses included bagels, women’s underwear, metro cards, cleaning supplies, tobacco, and a lot of walkie-talkies.

In Boston, occupiers had earmarked $1,000 to build “Occu-bagos” — small structures built on bicycle trailers that could be used for sleeping — before their camp was cleared by police in the early hours of Dec. 10.

Rashon Bliss, a member of Occupy Denver, said that group’s main expenses have covered printing flyers and bailing protesters out of jail.

Not every request gets approved. In Oakland, occupiers recently rejected a proposal to give $3,000 to a “tree-sitter” who wanted climbing rope, carabiners, a bicycle, Purell, walkie-talkies and other items to expand the occupation of a nearby Sycamore.

Where did it come from?

The lack of public data on Occupy donations makes it difficult to track precisely how much is being raised, or where the money is coming from. Occupy movements in some cities keep donor entities anonymous, saying that people should be free to donate without fear of retribution from an employer, for example.

An analysis by WePay, which many of the movements use to accept online donations, offers some insight.

About two-thirds who gave money in September and October were men, according to the fundraising site. Nearly half made between $50,000 and $100,000 per year. Just over a third reported being college-educated.

With the exception of those giving to New York, which has financial supporters around the world, donors tend to live close to the “occupations” they support.

For example, the owner of a local theater in Oakland recently donated the ticket sales from two screenings of “V for Vendetta” — the movie in which a masked vigilante wages a violent battle against a futuristic totalitarian state. Protesters in Oakland said the proceeds totaled about $6,200.

In Boston, a middle-aged woman who is originally from China surprised protesters when she showed up at the camp one evening with $800 in cash. “She said she grew up in repressive regimes … and wanted deep change to happen in this country,” said Murphy, of the Occupy Boston finance group.

The Occupy Boston finance working-group has been taken to court by an ousted member they accused of spending cash without permission.

In Portland, fundraising efforts were set back last month when a frustrated finance team member apparently refunded some $14,000 in Paypal donations without the group’s permission.

Some Occupy Oakland members found themselves on the defensive last month after $20,000 from their New York counterparts for legal and medical expenses wound up in a Wells Fargo account less than a week after the group had protested big banks. A splinter group of more aggressive protesters had gone so far as to smash the windows of Wells Fargo and other businesses.

Tim Fong, a lawyer and member of the Occupy Oakland finance team, said he offered up his Wells Fargo client trust account because protesters had no other secure way to quickly receive the funds.

At a recent finance committee meeting, Fong said Occupy Oakland was still waiting for the secretary of state to approve paperwork that will allow the group to open its own account — at a local credit union.