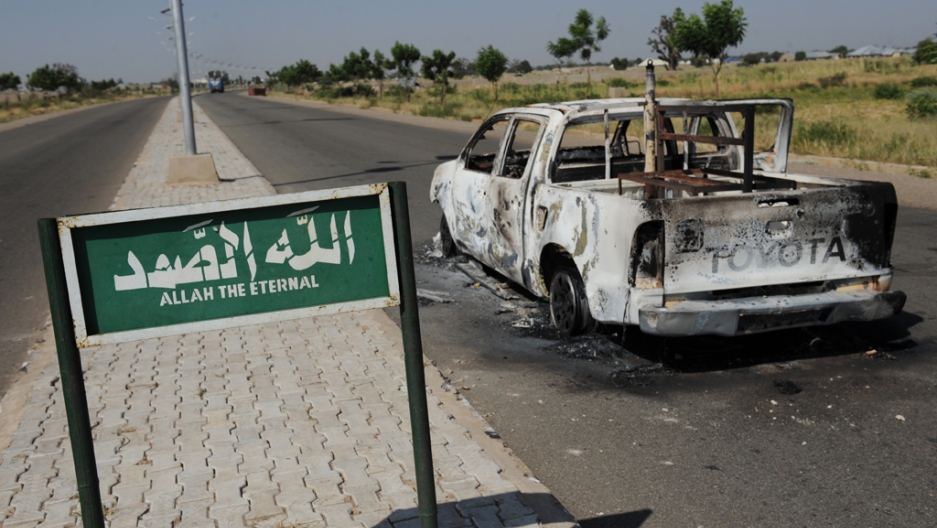 In November, a police patrol pick-up truck in Damaturu was struck by a bomb that the Islamist group, Boko Haram, claimed responsibility for attacking.
Credit: Pius Utomi Ekpei
Share

Six explosions and constant gunfire rocked the Nigerian city of Maiduguri today, according to Al Jazeera.

Violence broke out in the town, located in northeastern Nigeria, after similar gunfire and explosions occurred in another city called Damaturu. There, gunmen opened fire at a checkpoint.

The Islamist group, Boko Haram, has been largely blamed for the attacks.

Kabiru Musa, a resident of Damaturu, told AFP that "there have been explosions and shootings around the Pompomari area of the city."

Musa added that people are moving indoors, but "it is not really clear whether it is an attack or a shootout with police and Boko Haram."

According to AFP, another resident said that some Boko Haram members were "in the streets shooting and setting off explosions at random."

Since early November, the group has claimed 150 lives in the city of Damaturu alone.

It was also responsible for an attack on UN headquarters in the Nigerian capital of Abuja, where a suicide bomber killed at least 24 people.

Maiduguri deployed a military task force in an effort to stop the organization, the AFP reported.

Unfortunately, the force has "been accused of major abuses, including shooting civilians and burning their homes in the wake of bomb attacks."

In 2009, Boko Haram launched a military assault that killed 800 people and destroyed a mosque located in Maiduguri.

After a brief lull, the group re-emerged with a series of assassinations in 2010.

The AFP reported there has "been intense speculation over whether Boko Haram has formed links with outside extremist groups, including Al Qaeda's north African branch."