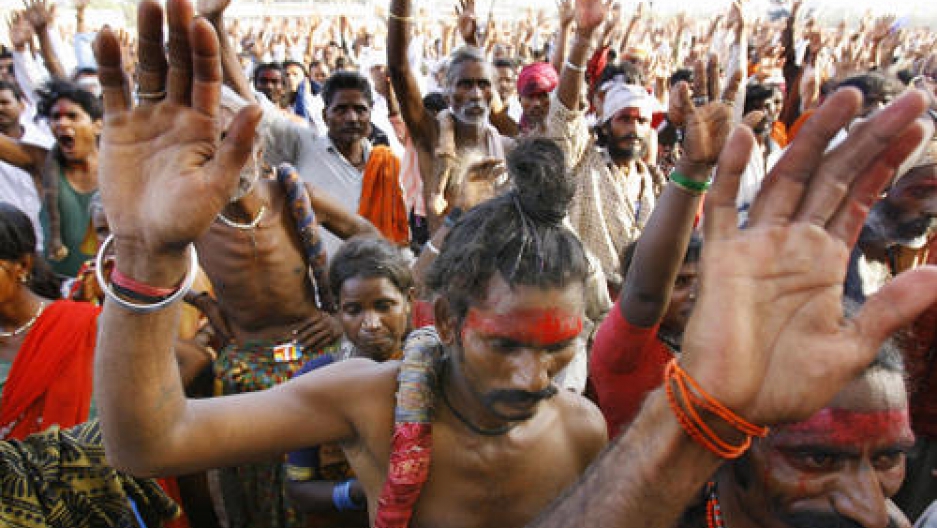 Hindu dalits pray during a mass conversion to Buddhism ceremony in Mumbai, 27 May 2007. Thousands of low-caste and tribal Hindus, seeking freedom from oppression in India's heirarchy-ridden caste system, embraced Buddhism in a mass conversion. It is estimated that close to five thousand dalits - who are on the bottom rung of India's anicent caste hierarchy - would have converted to Buddhism during the simple ceremony during which the people recite hymns read out by the monks, following which they are accepted as Buddhists.
Share

The New York Times' Lydia Polgreen's feature on successful Dalit entrepreneurs is thoughtful and evocative, and her effective character sketch of a millionaire named Ashok Khade will go some way to help readers identify with the thorny and complex problem of caste discrimination in India.

But I'm a little concerned that her piece (and one I wrote like it some time ago) may be looking too resolutely at the bright side.  Polgreen quotes Dalit commentator Chandrabhan Prasad as saying that the beauty of contemporary India is that class trumps caste, so as long as Dalits can afford the "goodies" and boast of a healthy bank balance they can win acceptance from the rest of the society.

Would that were true.

I recall when I met Chandrabhan a couple years ago that he told me that upper caste society would "never accept" him because of his background.  Among other things, he explained that he didn't wear the right clothes or speak with the right accent.  I'm relatively sure that he'd still agree with those points.  Perhaps he'd add a note of explanation to the quote he gave the Times: If you're a millionaire, maybe you can get a free pass.

It's also interesting that Khade's visit to the rural village where he was once ostracized is the primary (though by no means only) example of the way his wealth has helped him to overcome his caste.  If you think about it, what are we saying here?  If you pull yourself up by your bootstraps from abject poverty to become a millionaire, when you go back to your hometown, people who earn a few hundred dollars a year will give you respect?  What about the socialites in Mumbai?

More troubling, still, is the way that the self-empowerment achieved by these Dalit entrepreneurs is implicitly being used by some people in India to argue that the Dalits and other underprivileged castes / groups do not need quotas in government jobs and higher education.  In every single caste story I have written, I have never met a single successful Dalit who did not name reservations in education -- and usually in employment -- as the main or only reason that he or she had escaped poverty.

At the same time, for every one of these success stories there are literally millions of people whom caste discrimination -- and not just problems related to economic conditions (i.e. class) -- has prevented from escaping dire poverty and horrible social humiliation.