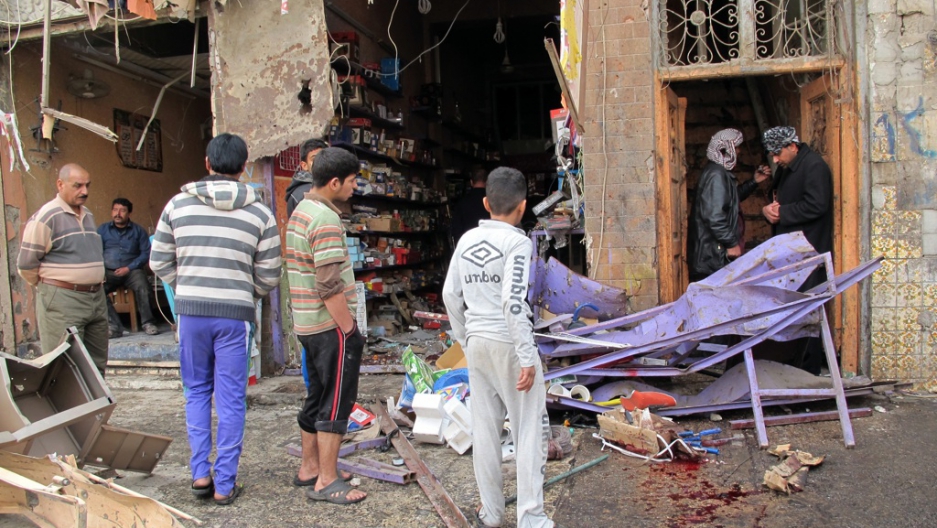 Iraqis inspect the damage after a wave of attacks in Baghdad killed at least 63 people on December 22, 2011.
Credit: KHALIL AL-MURSHIDI
Share

In Iraq, at least 63 people were killed and more than 180 wounded Thursday morning when a series of coordinated bomb explosions ripped through the capital Baghdad, The New York Times reported.

Health Ministry spokesman Ziad Tariq said there were at least 10 attacks across the city during the morning rush hour, Agence France Presse reported.

Security officials told AFP that blasts went off in the central Allawi, Bab al-Muatham and Karrada districts, the northern Adhamiyah, Shuala and Shaab neighborhoods, Jadriyah in the east, Ghazaliyah in the west and Al-Amil and Dura in the south.

There was no immediate claim of responsibility.

The explosions, the deadliest in more than four months, come as a political crisis in Iraq spurred fears of sectarian violence, the BBC reported.

Prime Minister Nouri al-Maliki on Wednesday threatened to break-off power sharing in Iraq, and replace all nine ministers from the Sunni-backed Iraqiya bloc if they choose to press ahead with a cabinet boycott.

GlobalPost opinion: How long can Iraq hold together?

Maliki has called for Kurdish officials in northern Iraq to hand over the Sunni Vice President Tareq al-Hashimi, who is the subject of an arrest warrant concerning terrorism charges.

Speaking at a televised press conference Wednesday, Maliki warned Kurds there would be "problems" if they failed to turn over Hashimi, the New York Times reported.

Hashimi denies the charges against him, which he says are politically motivated. Expressing concern that he would not be given a fair hearing, he has asked to be tried in Kurdistan and called for the Arab League to oversee the investigation.

The political divisions in Iraq come just days after the withdrawal of the last US troops.