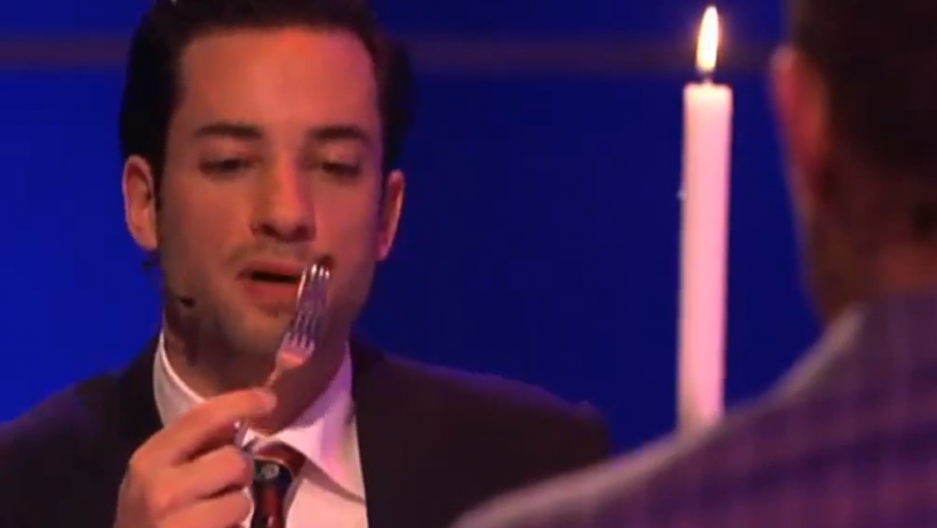 A clip from "Guinea Pigs," broadcast by Dutch channel BNN, in which two presenters eat a small chunk of one another's fried flesh.
Credit: BNN
Share

Video from a show that features Dutch TV presenters engaging in cannibalism has been posted on YouTube.

The stunt — in which two presenters eat a small chunk of one another's fried flesh — was filmed for the TV show Proefkonijnen, which means "Guinea Pigs" broadcast by the Dutch channel BNN.

BNN, The Associated Press wrote, is known for "testing the limits of good taste," notably in 2007, when it aired a fake game show in which people who needed kidney transplants competed on live television for a supposedly terminally ill woman's kidney.

BNN, which targets a youth audience, has previously aired programs such as "Shooting and Swallowing" in which presenters used illegal drugs and performed sex acts.

For "Guinea Pigs," presenters Dennis Storm and Valerio Zeno had small pieces of flesh surgically removed — Zeno, 27, opting for a chunk of muscle from his abdomen and Storm, 26, for flesh from his buttock, according to UK paper The Mirror.

Presenter Dennis Storm said in a news release that his motivation was a simple desire to know how human flesh tastes.

The teaser clip shows the the men sniffing each other’s flesh before a chef fries the meat, unseasoned, reportedly in sunflower oil.

They then sit and eat it, pensively, at a dining table adorned with candles and eat.

Storm told ABC News that it was “'weird to look into the eyes of a friend when you are chewing on his belly,” but claimed he did not regret the decision.

“We went to the butcher, the surgeon and the studio, then we looked at each other and just ate it,” he reportedly said. "It was just a few centimeters of meat — and now I have a good story about that scar."

According to the Mirror, while cannibalism is not expressly illegal in the Netherlands, the presenters and the surgeon who operated on them could face legal difficulties over the stunt.

However, The AP cited one of the country's best-known criminal defence lawyers, Gerard Spong — who also participated in the program — as saying that:

"Cutting and removing flesh from a healthy body without medical reason is illegal. Eating meat obtained in this way is ... punishable."

A spokesman for program, Thijs Verheij, said while the broadcaster had lied about "The Big Donor Show" — which ended up winning an international Emmy award after raising awareness about the issue of kidney donation — the cannibalism episode was taped in front of witnesses.

"If at the end of all the buildup we said 'just kidding,' we'd look like fools," he reportedly said.