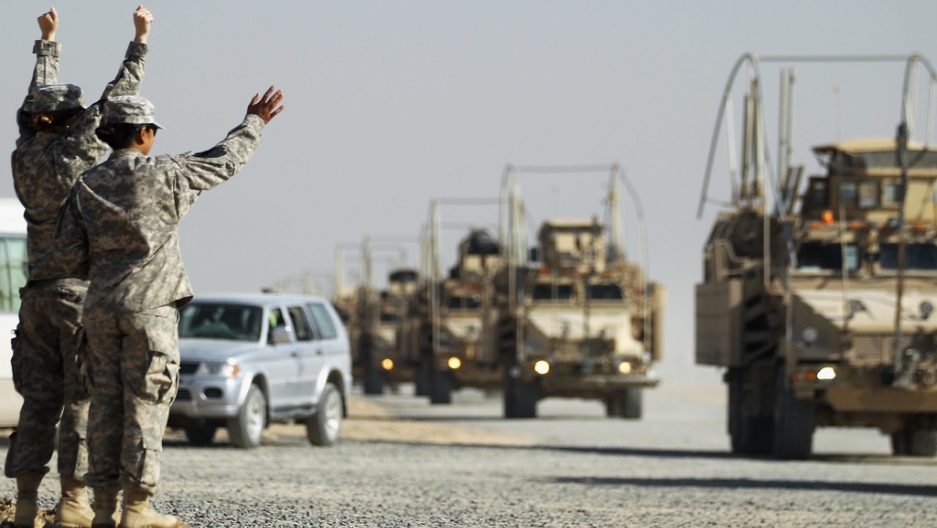 Soldiers wave to colleagues as a section of the last American military convoy to depart Iraq from the 3rd Brigade, 1st Cavalry Division arrives after crossing over the border into Kuwait on December 18, 2011 in Camp Virginia, Kuwait. At least 4,485 U.S. military personnel died in service in Iraq. According to the Iraq Body Count, more than 100,000 Iraqi civilians have died from war-related violence
Credit: Mario Tama
Share

BOSTON — And so it ends, America’s long war with Iraq, in a whimper with the last US troops slinking out on the road to Kuwait in the dead of night, hiding from even their Iraqi friends and counterparts that they were leaving lest they be attacked by the citizens whom they had supposedly come to liberate almost nine years ago.

It was a war that, instead of projecting America’s power and prestige, vastly reduced it.

It was a war born out of hubris, fear and revenge after 9/11, against a country with a loathsome leadership, but nonetheless a country that had done nothing to aid or abet the attack on the United States.

More from GlobalPost: US withdrawal from Iraq, by the numbers

The hubris could be heard early on with old politicians, such as Defense Secretary Donald Rumsfeld, talking about how “shock and awe” would overcome any Iraqi resistance, culminating in the President of the United States, George W. Bush, strutting the flight deck of an aircraft carrier in a flight suit under the banner “Mission Accomplished.”

It was hubris that led to the Bush administration to ignore the advice of professional soldiers and diplomats. It was hubris to think American power so irresistible that there was no need to know about the history, culture and traditions of Iraq, to think this would be like Eastern Europe shaking off the control of the Soviet Union, with bright young American conservatives coming into Baghdad to bless their newly-conquered peoples with plans for a flat tax.

Fear was also a factor, fear that a nuclear armed Iraq could one day threaten the United States, with the principles unwilling to take the time and effort to really find out if there were any weapons of mass destruction in the country.

It was an act of revenge against those who died on 9/11, for even though Iraq had nothing to do with that, it was deemed important to attack some Muslim land bigger and more important than Afghanistan to demonstrate America’s resolve. The Bush administration would continue to hint that Iraq had been linked to 9/11, despite the lack of any evidence before or since.

More from GlobalPost: Tragedy and irony as US leaves Iraq

It was a war whose architects had never seen combat, a war of intellectuals such as Paul Wolfowitz, Richard Perle and others who entertained dreamy neo-conservative, and neo-imperialist theories about how American might, after the collapse of the Soviet Union, should be used to force democracy down the throats of benighted peoples living in unenlightened darkness without benefit of America’s guiding hand. Create one democratic State in the Arab world and democracy, free markets would spread across the region, they thought.

Some even said that an American-controlled Iraq would become a friend to Israel, thus altering the Israeli-Arab dynamic in the Middle East.

Others thought it would be useful to control Iraq’s oil, to break the stranglehold of the OPEC cartel on the world’s supply.

What the invasion of Iraq did do was unleash all the pent-up rivalries that had been suppressed, Sunni versus Shia, and Kurds against the rest. And despite almost a decade of occupation, none of these issues have been resolved. Sunnis still long for their lost ascendency. Shiites want to consolidate their new-found power, and the Kurds still want to be masters of their own region without interference from Baghdad.

The current accusations against Vice President Tariq al-Hashimi are a case in point. Either he did organize death squads, as charged, or the case against him is trumped up to intimidate Sunnis. Either way Iraq’s fragile power-sharing arrangements suffer.

The big winner is Iran, which has enormously increased its influence in the region — even though it remains to be seen whether the old Perisan-Arab split will trump Shiite solidarity between Tehran and Iraq’s new Shiite-led government.

The exit from Iraq reminded me of another war, almost 40 years ago, in which the last American combat soldiers left Saigon in 1973 in a brief little ceremony in which each soldier was given a picture of Ho Chi Minh by a representative of North Vietnam. Then, as now, the basic underlying conflicts had not been resolved, but America hoped that they had sufficiently propped up the government they left behind in South Vietnam to provide a “decent interval,” in Henry Kissinger’s words, between our departure and any subsequent collapse.

The real end came not even two years later when I found myself climbing aboard an American helicopter at the American Embassy in 1975 just before North Vietnam’s tanks entered Saigon.

So did the Soviets leave Afghanistan in 1989, with their armored vehicles heading north across the Oxus River from where they had come, much as the Americans left along the same road they had come to Iraq, hoping that the regime they had left behind could hold out.

And, for a while, the regime the Soviets left behind did hold out — for almost twice as long as the regime America left behind in Saigon, as Russians are happy to point out.

It would be foolish to predict whether Iraqis can overcome the centrifugal forces that threaten to tear apart their country now that the Americans have left, or whether the next few months or years will provide only an indecent interval before chaos returns.

One lesson that both the United States and the Russians learned in their last two lost wars: If you want the regimes you left behind to hang on, you better keep money and supplies flowing. Saigon fell after the US Congress cut off funding and armaments. And the Afghan regime the Soviets left behind fell only after the Soviet Union itself dissolved, and funding ended.

The Obama administration has promised to continue American help to the ravaged country its soldiers leave behind. But who can say how long that promise will last and in what quantity, now that the economic barometer is falling and the world looks like its slipping into depression?