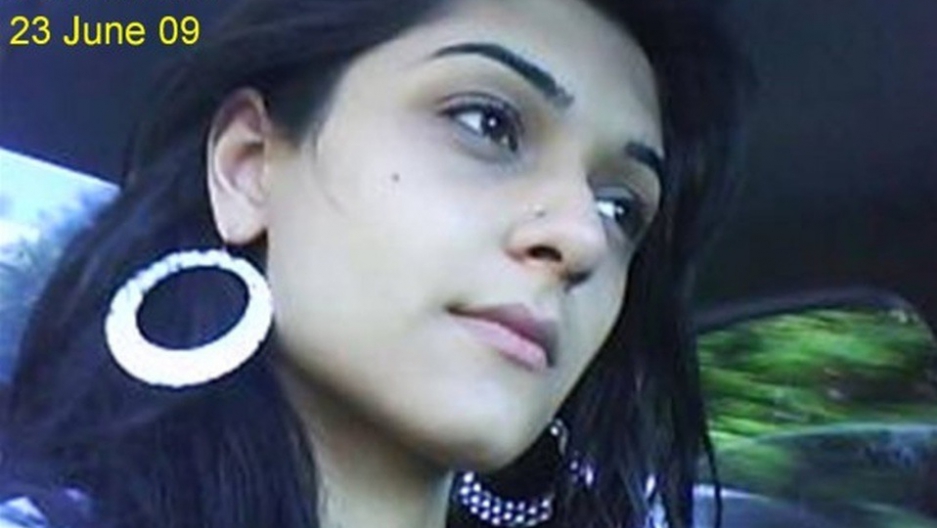 A cellphone photograph of Zainab Shafia several days before she died. It was taken by a cellphone found at the scene of the crime, and presented as evidence at the trial.
Credit: from CBC
Share

TORONTO, Canada — The alleged “honor killing” of three teenaged daughters by their Afghan-born parents has shocked a country that prizes multiculturalism and sparked debate about the integration of immigrants.

In the widely-followed trial, polygamist Mohammad Shafia is accused of murdering his three daughters and his first wife. Also accused of four counts of premeditated murder is Shafia’s 20-year-old son, Hamed, and Shafia’s second wife, Tooba Mohammad Yahya, the mother of the three dead girls.

The family lived in Montreal but the trial is in the eastern Ontario city of Kingston, where Lake Ontario meets the St. Lawrence River. The accused are alleged to have drowned the victims, whose bruised bodies were found piled inside a car at the bottom of the Rideau Canal on June 30, 2009.

Prosecutors have referred to the deaths as so-called “honor killings” — the murder of women for perceived violations of sexual or behavioral norms imposed by tradition. The United Nations has estimated that 5,000 occur worldwide every year.

Having daughters that acted like normal Canadian teenagers made Shafia furious, the jury has heard. The girls — Zainab, 19, Sahar, 17, and Geeti, 13 — dressed in short skirts and flirted with boys.

Shafia, a 59-year-old businessman, came to Canada with his second wife and their seven children in 2007. His first wife, Rona Amir Mohammad, arrived months later, officially introduced to Canadian immigration officials as the children’s aunt. Polygamy is illegal in Canada.

In the months before their deaths, the three sisters told social workers, school officials and police they were verbally and physically abused at home. Zainab spoke of enduring long periods of forced isolation in her bedroom. She fled to a shelter for abused women two months before she died. Sahar attended school with scratched and bruised arms, and attempted suicide by swallowing pills.

Child-welfare workers and police visited the home but didn’t remove the children, the court heard, apparently because the sisters refused to repeat their complaints in front of their parents.

Five weeks before her murder, Zainab married her boyfriend in a Montreal mosque. The marriage was dissolved the next day after pressure from her parents.

The accused have pleaded not guilty. They say Zainab took her sisters and “aunt” for a joyride while the rest of the family slept in a motel on the way back to Montreal from a visit to Niagara Falls, and likely had an accident.

Police suspected murder almost immediately. Pieces of a headlight from Shafia’s Lexus were found at the crime scene, and damage to the front of his car matched damage to the back end of the car in which the women were found.

Autopsies concluded that all four drowned. But police suspect they may have been killed before the car ended up at the bottom of the canal. The bodies were found piled in a way that made it impossible to figure out who was driving.

None wore seatbelts, and despite the driver’s window being fully opened, police say the position of the bodies suggests no one tried to escape from the submerged car. It was found in less than 7 feet of water.

Whatever the final verdict, the evidence so far has been chilling. Shortly after the deaths, police placed a listening device in Shafia’s car.

In another wiretapped conversation, Shafia, speaking to his second wife, is in a rage: “Even if they come back to life a hundred times, if I have a cleaver in my hand, I will cut (them) in pieces. Not once but a hundred times, as they acted that cruel towards you and me. For the love of God, what had we done to them? What excess had we committed … that they undressed themselves in front of boys?”

At one point, he is heard referring to his eldest daughter, Zainab: “Is that what a daughter should be? Would a daughter be such a whore?”

Then this outburst: “May the devil shit on their graves.”

Taking the witness stand in his defense, Shafia blamed his outbursts on photos he found, after their deaths, of his daughters hugging boyfriends and wearing short skirts.

“You believe there’s no value in life without honor, don’t you?” prosecutor Laurie Lacelle asked him.

“My honor is important to me,” he replied. “But you can’t regain your honor with murder … I’m a strict Muslim, but I’m not a killer.”

Later, Lacelle put it to him bluntly: “You believe their actions brought about their rightful deaths, don’t you?”

For many following the trial, it was a shocking and incomprehensible moment — a father who believed his daughters deserved to die.

Expert witness Shahrzad Mojab, a University of Toronto professor, said male-dominated societies see honor killings as a way of “cleansing” the perceived disgrace a woman has brought on the family. Mojab argued it predates the major religions and has been found among Muslims, Jews, Hindus and Christians.

“Even a rumor can cause the killing of a young woman,” Mojab told the court.

One report says 12 women were the victims of honor killings in Canada between 2002 and 2010.

One widely publicized case in 2010 saw Muhammad Parvez plead guilty to strangling his 16-year-old daughter, Aqsa, because she refused to wear a hijab, would not dress in traditional Pakistani clothes, and hung out with non-Pakistani girls. Parvez’s 29-year-old son also pleaded guilty to murder.

Asked by his grief-stricken wife why he killed their daughter, Parvez said: “My community will say you have not been able to control your daughter. This is my insult. She is making me naked.”

Like the Parvez case, the Shafia trial has raised questions about Canada’s 40-year-old policy of multiculturalism. Some argue integration in Canadian values is taking a back seat to tolerance of cultural differences. They point to the social workers who visited Shafia’s home and accuse them of letting multicultural sensitivities blind them to abuse.

Indeed, many argue that the underlying issue is violence against women, which afflicts mainstream Canadian culture as much as any other.

In the province of Ontario alone, there were 230 “domestic homicide-related deaths” from 2002 to 2007 — 142 women, 23 children and 65 men. All but 13 of the men who died in those incidents committed suicide after killing their wives, girlfriends or children.