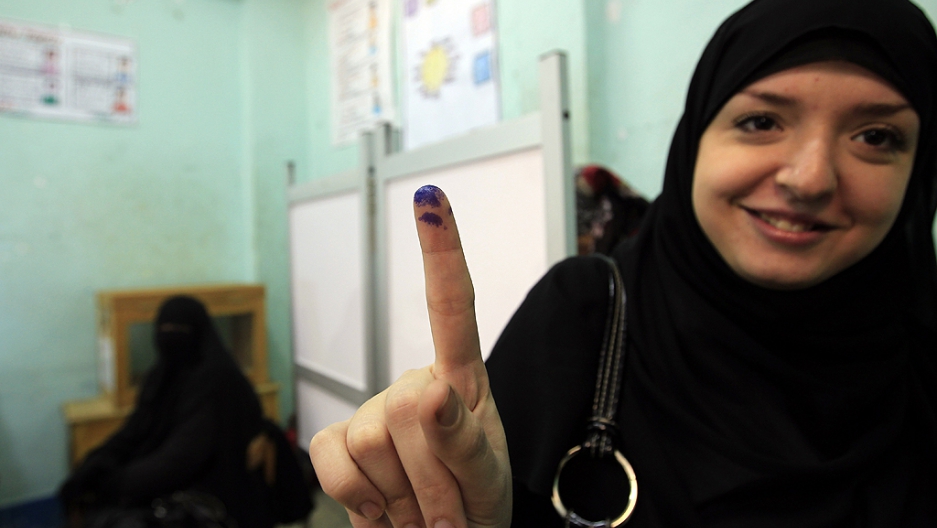 An Egyptian woman shows her ink-stained finger after she voted at a polling station in Giza district near Cairo on December 21, 2011 in the run-off of the second round of legislative election marred by deadly clashes between protesters and security forces.
Credit: MOHAMMED ABED
Share

Voting in the second phase runoffs of Egypt’s parliamentary elections kicked off on Wednesday, amid new allegations of electoral violations and fraud.

Egyptians are more than halfway through a six-week process of electing a new lower house of parliament - the first elections since the ouster of former president Hosni Mubarak in February.

Most observers agreed that the first two phases of the elections were largely free and fair.

The One World Foundation, an Egyptian human rights group, said supporters of the Salafi-led Nour Party prevented one of its observers from taking photos outside a polling station in Arbaeen, Suez.

The foundation said an army officer at a polling station in Ahnasia, Beni Suef, confiscated the cellphone of one of its agents and deleted video clips saved on it before returning it back. A police patrol arrested another observer in Zorab, Suez.

Mahmoud Salem, a revolutionary candidate who lost during the first phase of elections in Cairo, also wrote on his blog, “Rantings of a Sandmonkey”, of alleged vote fraud:

The parliamentary elections are fraudulent. I am not saying this because I lost- I lost fair and square- but because it’s the truth. The fraud happened on the hands of the election workers and the Judges. People in my campaign were offered Ballot boxes, employees and judges in polling stations were instructing people who to vote for and giving unstamped ballots to Christians in polling stations where they are heavily present to invalidate their votes, and the Egyptian bloc has about half a ton of correct ballots- ones that showed people voting for them- found being thrown in the streets in Heliopolis, Ghamra, Shubra, Zaitoun, Alexandria, Suez and many other districts. The amount of reports of fraud and legal injunctions submitted against these elections are enough to bring it all down and have it done all over again.

Meanwhile, voter turnout on Wednesday appeared to be lower than in previous weeks.

Several polling stations in Giza were mostly empty, according to voters on Twitter:

My voting station in dokki is practically deserted , the turn out for round 2 #EgyElections is minimal #Egyptyfrog.com/oc69lkgj