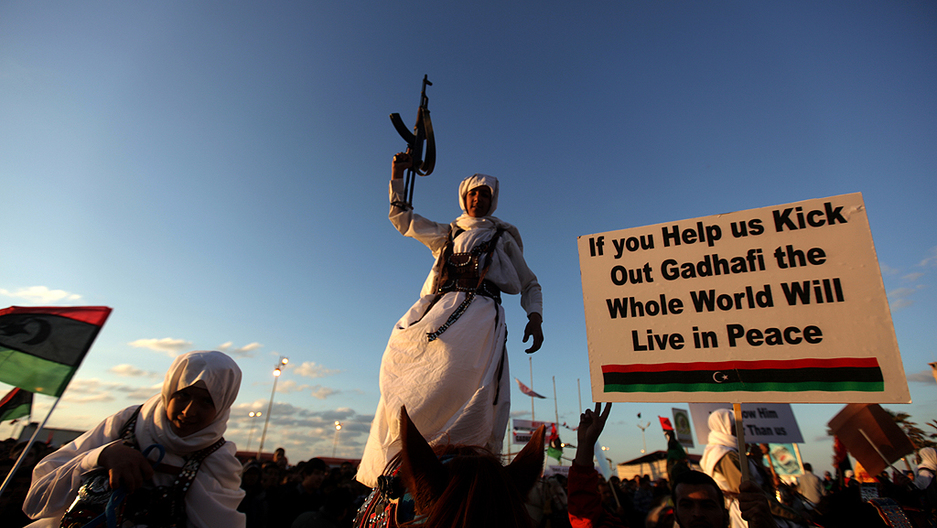 A Libyan rebel, member of the Warfala tribe parades on a horse in Benghazi on March 11, 2011 as thousands poured onto the streets of Benghazi on Friday, demanding Moamer Kadhafi quit and praying for victory in a bloody uprising inspired by revolutions in Egypt and Tunisia.
Credit: PATRICK BAZ
Share

Unrest in the Middle East was the second biggest news story of the year in the American media, according to research statistics compiled by the Pew Research Center.

The “Arab Spring” protests and the resulting unrest that began sweeping across North Africa and the Middle East this January comprised 12 percent of the space in newspapers and broadcast news in the U.S., according to Pew.

American coverage of the events in countries like Tunisia, Egypt, Libya, and Syria in 2011 ranked as the second biggest annual foreign news story (after coverage of Iraq in 2007) on record at the center.

Pew breaks it down:

The biggest component of the Mideast story in 2011 was the uprising in Libya, which involved international military intervention and the dramatic search for the fleeing Libyan dictator. The overthrow of Hosni Mubarak in Egypt was the second biggest part of the Mideast uprisings story. The ongoing violence in Syria was the third biggest element.

The biggest story of 2011, according to the Pew Research Center’s Project for Excellence in Journalism, was the economy.

Read about the other major stories of 2011 here.