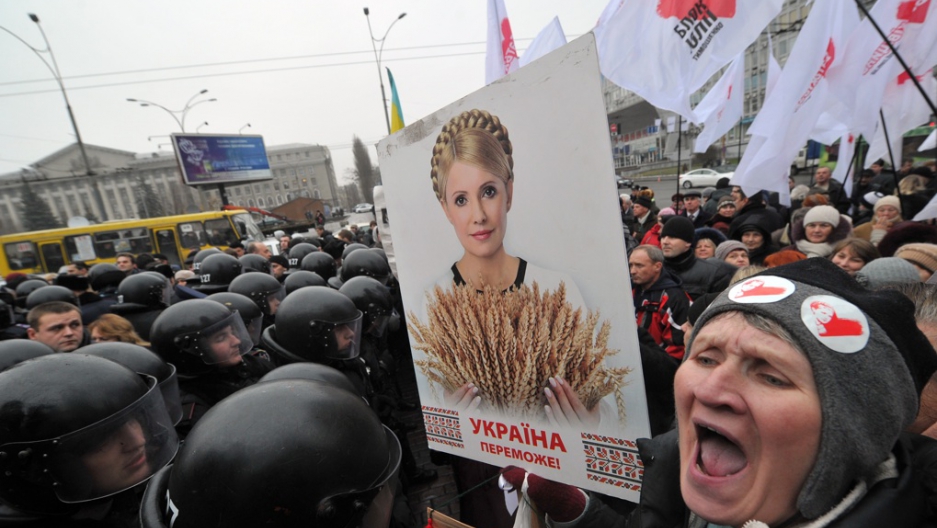 A supporter of Ukraine's former Prime Minister Yulia Tymoshenko shouts as she holds a picture of the opposition leader during the rally in front of a court in Kiev on December 14, 2011. The Kiev court hears an appeal against the jailing of the 51-year-old opposition leader for seven years which has endangered Ukraine's chances of joining the European Union.
Credit: Sergei Supinsky
Share

KIEV, Ukraine — This country has found itself uncomfortably in the news in recent months.

The jailing of former Prime Minister Yulia Tymoshenko sparked criticism from Europe and elsewhere, and resulted in speculation over whether the country might abandon its path toward integration with the European Union and instead cozy up with Vladimir Putin’s “Eurasian Union” — which would demand less on human rights and democracy.

Yesterday, Europe raised the stakes. At a summit in Kiev that aimed to advance a trade agreement with the continent, EU President Herman Van Rompuy warned that political abuses by Ukraine could derail the deal. In particular, he mentioned Tymoshenko’s imprisonment as “the most striking example” of what concerns the EU.

This fall, just after Tymoshenko was sentenced to seven years in prison, Prime Minister Mykola Azarov sat for an hour-long conversation with GlobalPost’s Eric J. Lyman.

After two brief stints as acting prime minister and one as finance minister, Azarov took over the prime minister job full time in 2010, in the wake of the Tymoshenko scandal.

The interview took place at Kiev’s Boryspil Airport, and addressed Tymoshenko, EU relations, and the lessons Ukraine has drawn from the nuclear meltdown at Chernobyl, which took place just 90 miles north of the capital of Kiev.

GlobalPost: The European Union has been very critical of the arrest of former Prime Minister Tymoshenko. Do you think it is appropriate for it to weigh in on something like this? Is there an issue of sovereignty at stake?

Azarov: (Chuckles.) Well, let’s ask the question in a different way: Is it correct that a government official can act the way Tymoshenko acted? If those who criticize the Ukraine believe she acted correctly, then that changes the argument. But I will say I was surprised to see how quickly assessments were made without any attempt to understand the situation. Only the courts can make a legal ruling.

Summarize your view of the situation involving Ms. Tymoshenko. How would you explain it to someone who knows nothing about it?

There is a great deal of myth and speculation about this case. If you read the ruling of the courts, you would see there is no politics involved. This is the great misconception: that it was a political decision to imprison her.

Then in that context, please explain the judicial decision.

The court sentenced her, not for the conclusion of the gas agreements, but for violations that were carried out during the negotiations. [Editor’s note: The controversy involved an expensive natural-gas supply deal that Tymoshenko signed with Russia.]

What I mean is that Ukrainian laws were violated in the extremely unfavorable conclusion of the negotiations, which has caused great hardship in the Ukraine.

I will explain: If Tymoshenko signed the same contact while following all the applicable laws, the case would have never been brought to court. But during the negotiations, the chairman of the Ukrainian national-gas company said he would not sign the contract unless ordered to by the government, because it was too unfavorable. Tymoshenko showed the chairman a document she said was an official decision from the government. But there was no government decision, it was her own decision that she misrepresented.

But as prime minister, didn’t she represent the government?

Just imagine that [German chancellor Angela] Merkel brings the Bundestag together for a decision, but they do not approve. Nonetheless, she decides to go forward anyway. I expect the criticisms of this would be very loud.

What was her motivation for pushing through such an unfavorable deal?

(Chuckles.) We can only speculate about her motivation. But I will note that her private company had debts to the Russian Ministry of Defense worth $405 million. We can only wonder if that was a factor, but understanding her motive is not necessary in order to examine the realities of the case. [Tymoshenko has maintained her innocence.]

What is Ukraine’s view regarding possible European integration or Russian integration? I have read many contradictory things. What exactly is it that Russia is proposing? And what is it that the European Union has told the Ukrainian government?

Well, we just signed a free-trade agreement with the [Commonwealth of Independent States, or CIS] countries. It still has to be ratified, which I suspect will happen in time for it to come into force by January 1. It is extremely beneficial for us because it opens markets for us [and] limits the number of exemptions from free trade, including a phase-out of tariffs on sugar and the right for gas from other countries — including Uzbekistan, Turkmenistan and Kazakhstan — to come to Ukraine while passing through Russian territory. The dates still have to be negotiated on some parts, but this process has already begun. It will be a very important deal.

Does this deal mean Ukraine will seek closer relations with the CIS rather than the European Union? There has been a great deal of speculation that the country will do so because of Soviet-era ties to the CIS governments and the fact that the CIS will likely put Ukraine under less scrutiny than the EU would.

(Laughs, then pauses). This is another example of myth about the relationship between Ukraine and the countries around it. On the north and east, we border Russia and other CIS states [Russia and Belarus], and on the west we border four EU states [Romania, Hungary, Slovakia, and Poland]. This position forces us to live peacefully with all our neighbors. We want to defend our national interests, and one of our national interests is to have good relations with all our neighbors.

If you look ahead 20 years, would it be more surprising for you to see Ukraine as part of a tightly-knit CIS Union, or to be closer to the European Union?

First of all, in 20 years the European Union will be changed considerably and the CIS countries will also be changed. I believe the basic EU principles — like freedom, human rights, and democracy — will be more and more the same principles of the CIS members.

But it is impossible to predict what will happen in 20 years. I will tell you a story: I just got back from a plant in Dnipropetrovsk. Only 20 years ago, it was a highly classified facility that produced missiles and satellites for the Soviet Union. Today, I saw with my own eyes: it is producing the first stage of parts for the US-designed Stanford Torus space station in collaboration with scientists from the United States. You cannot imagine the level of cooperation and trust this requires. Who could have imagined that 20 years ago, during the Cold War?

This is why I am optimistic about the future, because I believe the future will belong to all sorts of integration. I believe mankind is facing difficult challenges that will require a high degree of integration to resolve.

Are you saying you believe Ukraine will integrate with both the European Union and the CIS?

Yes, with both. And I think they will also integrate with each other in many ways. Ukraine will play an important role in this process.

Chernobyl, in Ukraine, had its tragic meltdown 25 years ago. Earlier this year we had the meltdown at Fukushima in Japan. In Europe, Germany says it is phasing out nuclear power; Italy says it wants to reintroduce nuclear power. Ukraine has had to deal with the consequences of Chernobyl for a generation now. What are the country’s views on nuclear power and the associated risks?

I am convinced that despite everything, we have no alternatives to nuclear energy. Mankind learns lessons from its mistakes. Nobody stopped making ships after the tragedy of the Titanic. But people started to pay more attention to safety and security. I think that both the Japanese tragedy and Chernobyl disaster taught us something, which is that we must pay more attention to design, construction and other safety aspects. Our scientists tell us that a plant can be designed ten times safer than the ones in Japan and many, many times safer than at Chernobyl.

Remember that life on earth appeared only because of nuclear energy. The sun itself is a nuclear reaction. Nuclear energy is a natural process, but safety and security must be the highest priorities.