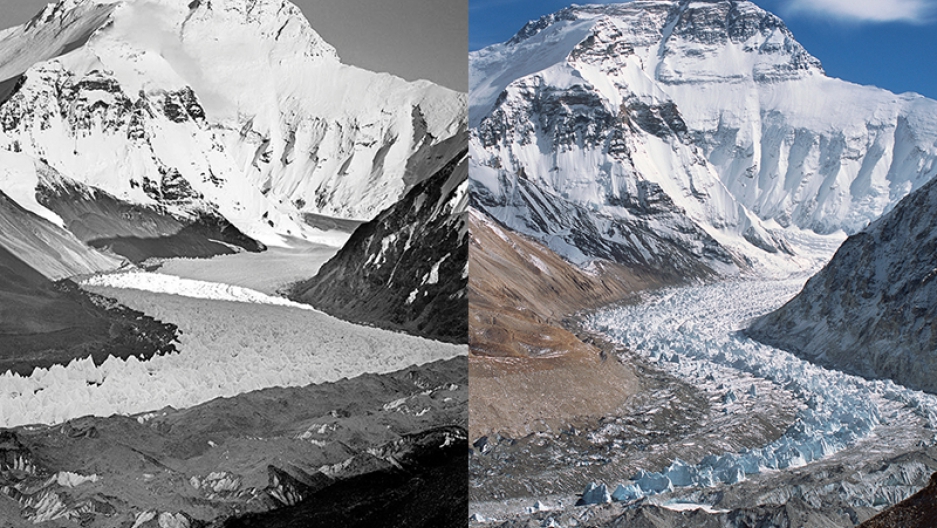 The Main Rongbuk Glacier, pictured in 1921, has been steadily losing ice and snow until the glacier is now barely more than a stream of ice down the valley. (Photo from Royal Geographical Society, left, and Glacier Works, right.)

In the last 30 years, glaciers in the Himalayas have shrunk by as much as 20 percent, according to the latest research.

The International Center for Integrated Mountain Development, based in Nepal, drew that conclusion after conducting what is believed to be the most comprehensive study ever of Himalayan ice melting. The findings concern David Breashears, a mountaineer, filmmaker, and executive director and founder of the non-profit Glacierworks.

And those river systems provide the primary clean water supply for almost 40 percent of the Earth's population, spread between China, India, Pakistan and several other, smaller countries in the area.

Breashears recently completed an expedition to the Himalayas, where he brought along old photographs taken by some of the earliest climbers in the region.

"The glacier I was looking at was unfamiliar to the glacier in the old photograph," he said. "It was complete devastation. Lakes were forming on it. It had melted vertically over the height of a 30-35 story building."

Breashears said he was shocked to see lakes, large ones, formed on top of what had once been rivers of ice. He's taken new photographs, matched them with the old ones and he's taken them on exhibition to show just how the world is changing.

"It's irrefutable," he said.

In China, it's been a spectacular success, Breashears said, drawing numerous people and a great deal of media coverage.

"What makes us very proud is a tremendous amount of school groups going there and discovering what's happening to this vital area. In China in particular, they have the capability to take action," he said. "The Chinese will act our of pure pragmatism. What they want is a stable population. A stable population needs water."