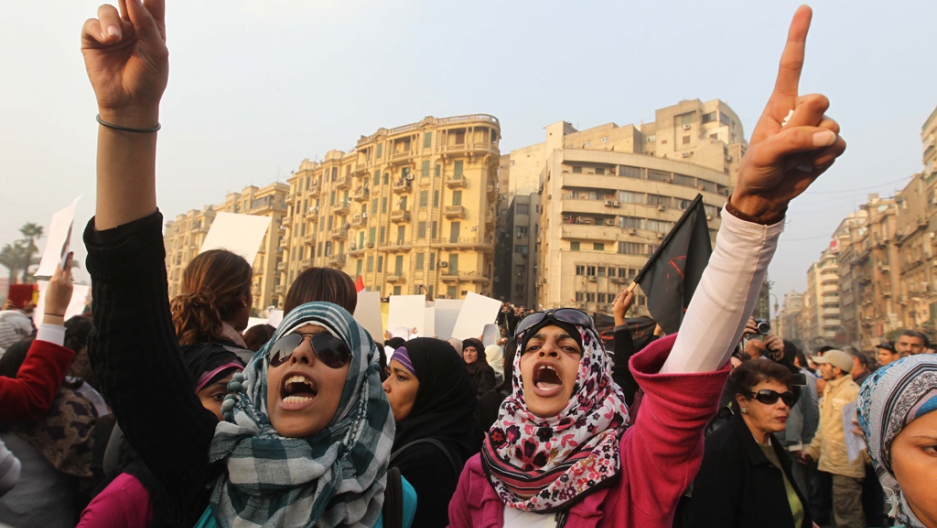 Egyptian women protest in downtown Cairo against the military's violent treatment towards women, and to call for an end to the attacks on protesters.
Credit: Khaled Desouki
Share

In response to the brutal attacks on women at the hands of military personnel, women gathered in Cairo today to protest the military.

According to The New York Times, the protest was prompted by an incident that occurred last weekend, when footage of a woman being beaten by soldiers spread across YouTube.

In the video, soldiers were "pulling the abaya off a prone woman to reveal her blue bra as one raises a boot to kick her," reported the Times.

"The picture, circulated around the world, has become a rallying point for activists opposed to military rule, though cameras also captured soldiers pulling the clothes off other women."

The protesters gathered in front of a government office building at Tahrir Square, where soldiers made a recent and brutal attempt to evict protesters camped there, The Guardian reported.

The protesters were joined with dozens of other men who gathered with the women in solidarity.

The men circled around the women, acting as a "protective cordon," and chanted: "Egyptian women are a red line."

According to CNN, today's protest is called the "Million Women" march.

"Many held up pictures of abused people, and they called for regime change," CNN reported.

"Protesters are now demanding that the ruling Supreme Council of the Armed Forces swiftly hand authority over to an elected civilian government."

The military said it will transfer its power after the elections are held next year, but Egyptian citizens remain skeptical.