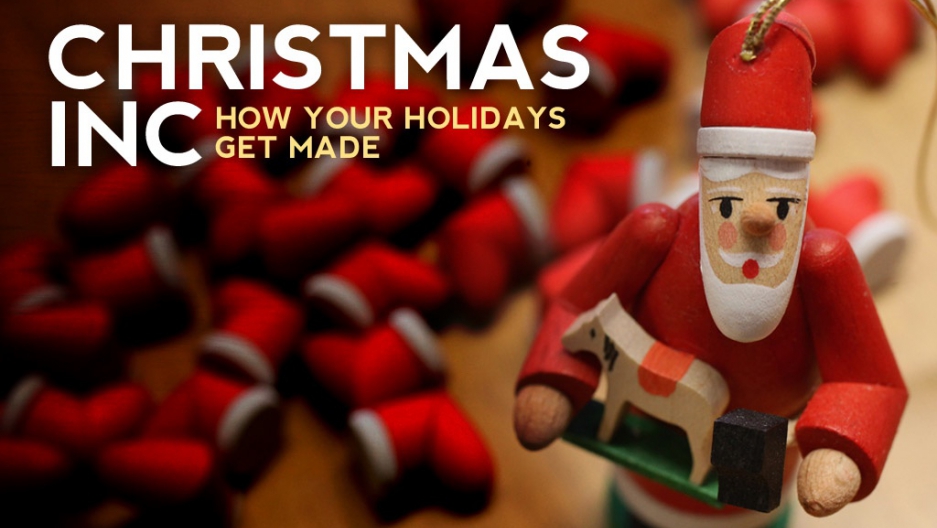 Editor's note: When it comes to the economy, the holidays really do bring us together. Coal mined in South Africa heads to China, where it fuels the plants desperately in need of a little pick-me-up in this economic climate. The stubborn flow of goods persists from there, and even during the dismal European debt crisis, people in France stuff their pockets full of Christmas cheer this time of year. Take the full tour of GlobalPost's "Christmas, Inc.," a series about how your holidays get made.

"The birds are fed powdered milk during the last 15 days of their lives. That’s what gives them this beautiful white hue," says Hervouet, the owner of Courtin Hervouet wholesalers, a century-old poultry business.

Hervouet’s grandfather started the business in Les Halles, the huge, central-Parisian market, known as the belly of Paris. Forty years ago, however, in an effort to stanch the vermin and pre-dawn commotion, authorities shut down the celebrated market and converted Les Halles into an underground shopping mall.

Now, Hervouet’s capons, and the rest of France’s belly, have moved near Orly airport, to an expanse nearly one square mile in size. French journalists like to compare the market to the Principality of Monaco – in size that is; there are no millionaires in sight.

December is Rungis’ busiest month, especially as the French prepare for their feasts.

Even in the 5 a.m. darkness, salespeople rush from one client to the next, struggling to keep track of orders. It’s a cacophony of Gallic shrugging, swearing and gesticulating.

Despite the commotion, disputes at Rungis aren’t serious, says Etienne Couturier, who owns Trivol wholesaler. "Nobody has any time to lose. You can tell each other to get lost and it doesn’t mean a thing," says Couturier.

More from GlobalPost: Inside a Thai Christmas-tree factory

This month, Hervouet says "you just can’t mess up," which can mean working for up to 19 hours a day. The last few days before Christmas are critical.

Fishmongers nervously wait for orders to arrive. The French love their holiday oysters, and seafood sales increase fourfold this time of year.

A storm last week on the Brittany coast forced fishermen to stay at home and stopped oyster supplies, a bad omen for the fishmongers.

In December, 7,500 tons of birds are expected to transit through the poultry hall at the Rungis fresh food market, supplying butchers, restaurants and brasseries in Paris and across France.

In the packed Café Saint Hubert, at one end of the poultry hall, buyers and bloodied carvers stop off for a shot of caffeine.

"We’re the soul of the market," says café manager Michel Soulenq. "Everybody here stands on an equal footing, you don’t find that elsewhere." It’s here that many of the deals are made.

With euro-zone crisis and a recession looming in France, wholesalers and buyers are anxious. "Consumers are going to cut back on Christmas products, I really don’t think there’ll be an increase in sales this year," says Laurence Fontaine, a buyer who supplies several markets in the outskirts of Paris.

Sales at Rungis, which supplies Paris’s vibrant network of independent retailers, have been stable over the past couple of years. And Christmas traditionally involves a lot of poultry, foie gras, oysters, cheese — products the French will buy for the holidays, even during a recession.

Wholesalers have noticed a gradual change in habits: people buy smaller birds and more raw foie gras than before.

With the size of the French family shrinking, wholesalers have responded by finding smaller birds. Poultry producers have crossed roosters and dwarf chickens to produce mini-capons — an appetizing newcomer on the Christmas table.

This year, the merchants at Rungis are optimistic — at least they seem to be — in a caustic, Parisian style.

"Whatever happens, it can’t be worse than last year," says Olivier Marcy, sales manager of Simbad wholesaler, sitting in a small cubicle overlooking rows of fish. In 2010, heavy snow disrupted seafood distribution and left fishmongers in Rungis with no produce and plenty of dissatisfied clients.

Marcy has taken on a lot of risk for the holidays. He has already committed to buying large amounts of lobster and scampi for Christmas. A week before the holiday, however, his order book is still empty.

"Our clients order at the last minute before Christmas," says Marcy, "nobody takes any risk except us, we put our neck on the line."

So Marcy guesses what his clients — fish shops and restaurants in Paris — will want this year.

And the art of predicting orders certainly is an fine one.

"It depends on how I feel on that day, it’s all just guesswork."