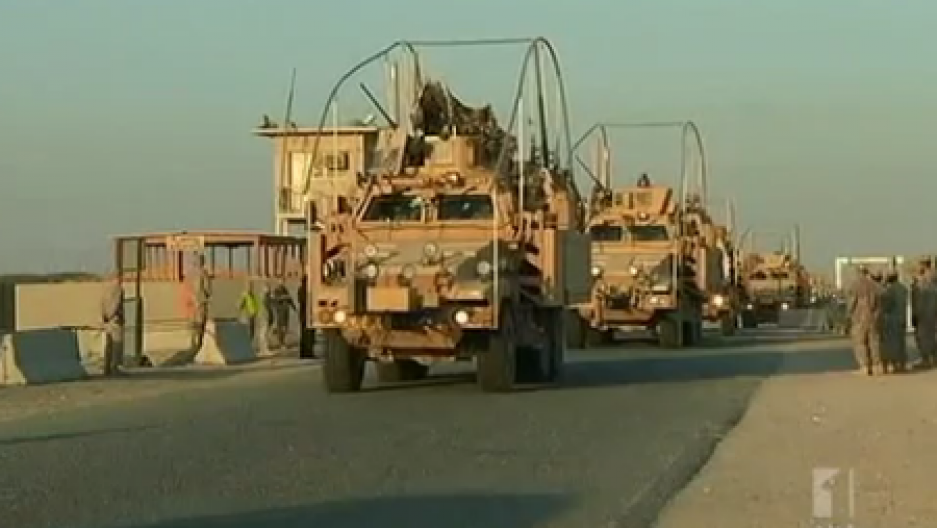 U.S. troops drive their MRAPs out of Iraq and into Kuwait, ending the long American deployment in the country. (Photo from ABCau video.)

Over the weekend, the last 500 U.S. troops pulled out of Iraq.

Their convoy drove through southern Iraq and into Kuwait, where some 4,000 U.S. troops will remain for the foreseeable future. Just in case.

All that remains of the U.S. operation in Iraq that once numbered more than 170,000 soldiers and Marines is about 147 soldiers at the U.S. Embassy who will oversee training and a small handful of Embassy Marines, responsible for protecting the diplomatic mission — as they do in countries all over the world.

BBC Iraq correspondent Hugh Sykes said the place is as peaceful as it's been since the invasion some almost nine years ago. But that peace, most say, is tenuous.

"There's a big poster up, celebrating the departure of the Americans," Sykes said, while standing in Sadr City. "On the left-hand side, it shows American soldiers in their combat fatigues, running away across the desert into the distance. And on the right, it shows smiling Iraqi school children, giving the V for victory sign. The caption reads 'The Americans are leaving, but we're staying. Thanks to our government, our country has been liberated from occupation.' That's the almost universal sentiment that I've heard."

Some Iraqis, though, while celebrating their departure didn't look back their time as completely negative. One merchant in the market in Sadr City said the Americans had done some good things during their time in Iraq.

In 2005, for example, they built a water purifier in Sadr City, and distributed thousands of liters of water every day to civilians. Of course, that contrasts with gun battles that rocked the city in 2006, killed many.