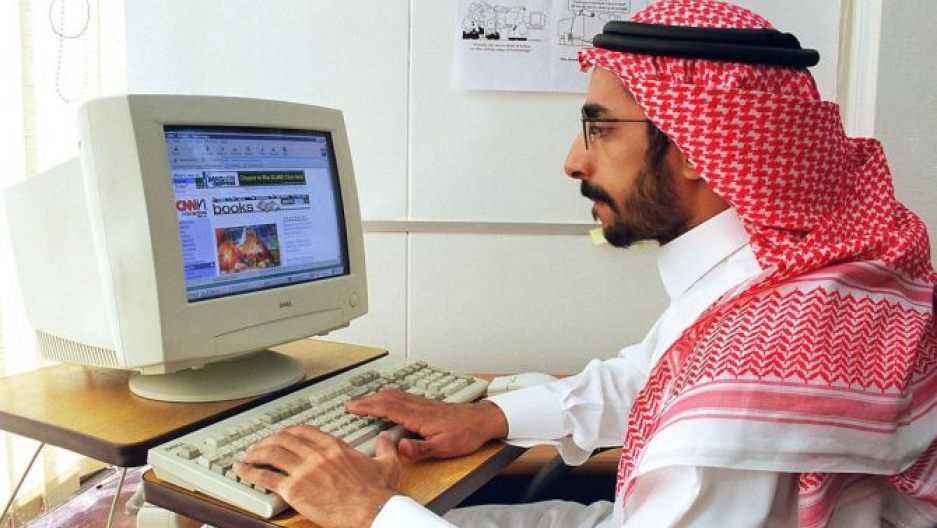 A Saudi employee surfs the Internet in his office in Riyadh, Saudi Arabia, December 27, 1998, just as the Saudi public was gaining access to the Internet after a wait of several years.
Credit: Abed Monhem
Share

GlobalPost asked two young Saudis to contribute to the Special Report “The Road Beyond 9-11” by writing about some aspect of religion in the kingdom. Tariq Al Haydar (@TariqAlhaydar) is an English lecturer at King Saud University and currently a PhD candidate in English literature at George Washington University.

“There is no God,” exclaimed Mohammad.

This comment was surprising and we all fidgeted in our seats. Actually, we weren’t in “seats” per se. Istirahas — or rest houses — like the one we were in usually have cushions on the floor. We sit cross-legged or leaning on pillows. I often frequented istirahas but that was the first time I had ever heard a Saudi express his disbelief so explicitly.

Mohammad’s comment was in response to Khalid, who had warned us not to speak ill of the muftis — Saudi Arabia’s most senior religious officials — or anyone else in the official religious establishment.

“Don’t you know,” he had asked, “that clerics are sacred? You shouldn’t speak ill of them. There are red lines one should never cross.”

Following Mohammad’s outrageous response, a nervous Aziz pleaded that we go back to discussing the upcoming local soccer match between the two popular national teams, Hilal and Nasr. We did.

That was Riyadh, 1997, just before the internet entered Saudi Arabia. I was in high school.

Since then, it has been tempting to tell the story of a digital awakening in Saudi Arabia, of how young Saudis flocking to online forums and chat rooms are shedding their “outmoded” religious beliefs. Of how brave Saudis, tired of the world their parents had created, were finally assembling in the one space where assembly was possible within Saudi Arabia — cyberspace — and leading a religious revolution. Of how Saudis, trapped in the medieval ages since God knows when, were finally freeing themselves from ancient shackles thanks to technology.

It is a compelling and uplifting story. Perhaps even inspiring. There’s only one problem: it’s not true.

The internet has not dramatically affected the way young Saudis think of religion. That is because it is simply one new variable added to the complex mixture that makes up Saudi society.

In 2002, when Saudis had relatively limited access to the internet, Saudi journalist Eman Al-Guwaifly wrote a four-part series for the regional newspaper Al-Sharq Al-Awsat about online forums. These forums were virtual ghettoes where Saudis could express themselves using pseudonyms, and they were beginning to create a space to interact with political and societal events in a way that circumvented official channels.

Al-Guwaifly reported on three popular forums: “Al-Saha Al-Arabia” (“The Arabian Arena”); “Aalam Hawwa’” (“Eve’s World”) and “Al-Iqla’” (“The Launch”). There were a few worthwhile discussions on these forums, especially “The Launch,” where visitors wrote in regional dialects as opposed to classical Arabic as a way of expressing their individuality. Sarcasm was an important component. Taking into account the fact that state-sponsored Saudi media rarely provided any real social or political commentary, intelligent young Saudis of both genders logged on to scrutinize, ridicule, analyze and satirize. Religion, however, remained peripheral on these forums.

One exception that did encourage religious debate was Allibralion Al-Saudion (“Saudi Liberals”), a forum set up by Raif Badawi in 2006. Badawi repeatedly criticized the Committee for the Propagation of Virtue and the Prevention of Vice, more commonly referred to in Western media as the “religious police.” The forum became one of several cyber battlegrounds in a larger culture war between “liberal” and “conservative” members of Saudi society. Badawi’s forum was subjected to numerous cyber attacks. His site was hacked, and his phone numbers and other personal information published. Badawi was also interrogated by Saudi intelligence, and he reportedly is prohibited from leaving the kingdom.

While the internet has not deeply altered the religious beliefs of most young Saudis, it is having an impact on how they view and engage with religious authorities.

Social media has given them access to public figures, some of whom are affiliated with the official religious establishment. As a result, the mystique that has surrounded Saudi clerics for decades is rapidly evaporating. Twitter has allowed young Saudis to interact directly with certain religious figures. I personally have engaged many of these clerics, one of whom believes that Muslims should avoid all Western culture. He is apparently oblivious to the irony of expressing this belief in the form of a tweet.

There is an element of anarchy to Twitter. Unlike other online outlets within Saudi Arabia, where somebody is always in control, on Twitter nobody is in control. Anyone can critique anything, and young Saudis have imaginatively utilized this space in a number of ways, most recently in the case of Feras Bugnah. An aspiring filmmaker, Bugnah posted a short film on YouTube that highlighted poverty in Riyadh. The clip went viral, and, as a result, Bugnah was imprisoned for reasons that remain unclear.

His story quickly circulated among young Saudis, and a Twitter campaign was started with the goal of getting Bugnah’s 10,000 Twitter followers increased to 50,000 in order to create pressure and facilitate his release. People started following Bugnah’s account (@FMB4) en masse. After two weeks in jail, he was released from custody to find that he had more than 50,000 followers. Currently, he has more than 100,000.

The internet is not causing young Saudis to abandon whatever religious beliefs they have, but it is becoming increasingly evident that Saudis are willing and able to criticize entities such as the state-sponsored religious establishment. Social media sites like Twitter offer them the best space to express their views.

While the population of Saudi Arabia is officially 100 percent Muslim, it is undeniable that there have always been Saudi atheists and agnostics, as well as those who are simply indifferent to religion. In the past, it was only possible for them to cross a red line and express their beliefs in private forums, such as living rooms, cafes and istirahas.

Nowadays, such red lines are increasingly being crossed in the public square of cyberspace. It is difficult to predict how the Saudi “virtual” world will affect the “real” worlds of Saudi politics and religion in the future. But even now, it is oddly reassuring that at any given moment, a young Saudi may be crossing a red line when he or she goes online.

This work was supported by a 2011 Knight Luce Fellowship for Reporting on Global Religion and edited by Knight Luce 2011 Fellow Caryle Murphy. The fellowship is a program of the University of Southern California's Knight Program in Media and Religion.