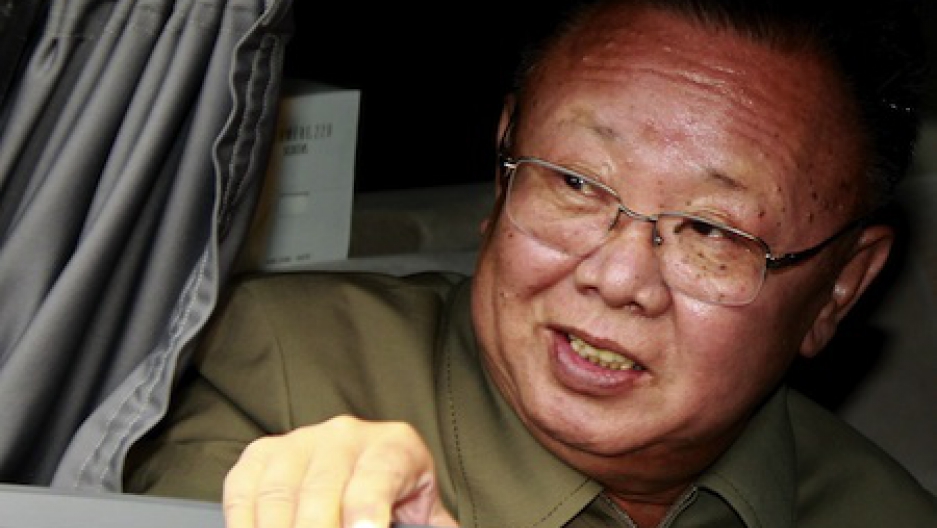 North Korea's leader Kim Jong-Il peers out of a car window after a meeting with Russian officials on August 24, 2011.
Credit: DMITRY ASTAKHOV
Share

Kim, whose official age was 69 but who actually was 70, died Saturday of a heart attack, according to North Korean state media.

He leaves behind a pretty much officially designated heir, his son Kim Jong Un, whose age is about 29. The young man has been given exalted titles including full general but has little experience compared with what his father had under his belt when Kim Jong Il’s own father and predecessor, Kim Il Sung, died in 1994.

The regime appears to have tried to position Kim Jong Un as a sort of reincarnation of Kim Il Sung, whom the young man greatly resembles physically. Barbers have given him the same haircut his grandfather sported when he took over the country in 1945 with Soviet sponsorship. There are rumors in South Korea that the young man has had plastic surgery to accentuate the resemblance. He wears the same “people’s clothing” — Mao suits — that his grandfather wore, not the zippered jumpsuits favored by Kim Jong Il.

This sort of branding effort recognizes that Kim Jong Il was never remotely as popular as Kim Il Sung, and was quite aware of that fact. Kim Jong Il publicly moped around Pyongyang for three years as he enforced a mourning period for his own father. It will be surprising if Kim Jong Il in death rates a similar production.

Assuming that the state news account is correct and Kim Jong Il was not killed but died naturally, the focus will be on his brother-in-law Jang Song Taek, who appears to have acted as his right hand since his illness became serious.

Many South Korean and foreign analysts had predicted that Jang could act as regent while the youthful Kim Jong Un consolidates his rule. Jang has no son of his own, and his wife is Kim Jong Un’s aunt.

Important factors to consider regarding Jang are that he has been deeply involved in trade and financial transactions — to the extent Kim Jong Il reportedly punished him by sending him away for “correction by labor” when he was caught in corrupt schemes — and that he has been close to the North Korean military and to the Chinese.

While Jang had a largely civilian career, his brothers were promoted to general officer rank in the North Korean People’s Army. That connection on top of his in-law relationship with Kim Jong Il has been a major source of influence for him.

As for China, there was a report a few years ago that Jang wanted to take over the North Korean economy and engage in Chinese-style reforms. That was not Kim Jong Il’s policy: The now-dead ruler visited China repeatedly, praised its achievements but never proved willing to risk the threats to his rule that he feared might arise if he freed his people to engage in de facto capitalism.

Most North Korean families that have managed to prosper under the regime have at least one member — usually a woman — engaged in trading in public markets. The Kim Jong Il regime repeatedly sought to stifle those markets, even as it failed to maintain the food-rationing system that had kept the people reasonably loyal through the 1980s.

Whether Kim Jong Un can smoothly become a one-man ruler like his father and grandfather is impossible to say now. If Jang is on his side — that’s not certain — and if there is no successful revolt by opponents, he may have a chance despite his serious lack of experience.

Kim Jong Un also has inherited from his father a Karl Rove-like figure who reportedly has been working to prepare the people to accept him as a near-deity in the Kim dynastic tradition. That is Choe Yong Hae, former chairman of the Kim Il Sung League of Socialist Working Youth. Choe had a similar role in preparing Kim Jong Il’s succession, but had far more time to put his strategies into effect.

By the time Kim Il Sung died in 1994 and Kim Jong Il became sole ruler, he had been officially heir for at least 14 years and had been deeply involved in day-to-day administration of the regime for longer than that. Kim Jong Un by comparison is just getting started. The regime started mentioning him in news reports just three years ago.

If the state news accounts should turn out to be false and Kim Jong Il actually died of other than natural causes, the possibilities might include a military coup. Security in the self-isolated country is so tight that a coup would be difficult, but there have been attempts in the past.

Some South Korean and other analysts see a takeover by an anti-Kim military dictatorship as the ticket to the North’s economic transformation, akin to the changes wrought in the South under President Park Chung Hee, a major general who took power there in 1961.

Whoever rules will have to deal with China, South Korea, the United States and Japan. The Chinese have been impatient with Kim Jong Il’s failure to reform and open the economy, but they would have security concerns if developments in Pyongyang seemed to point to reunification of North and South Korea or to a close relationship between North Korea and the United States.

Ironically, Kim Jong Il’s death has come just before the opening of 2012, which the regime had been promoting as not only the 100th anniversary of Kim Il Sung’s birth but a year in which the country would show significant progress toward becoming a “strong and powerful state.”

There seems to be little possibility the country will become strong economically in the coming year, but the regime can still celebrate its elevation in recent years to the status of nuclear power.

Washington and the capitals surrounding Pyongyang have grown deeply pessimistic about persuading North Korea to give up its nuclear weapons capability.

Bradley K. Martin, author of "Under the Loving Care of the Fatherly Leader: North Korea and the Kim Dynasty," teaches at the University of Alaska Fairbanks as the Snedden chair in journalism.