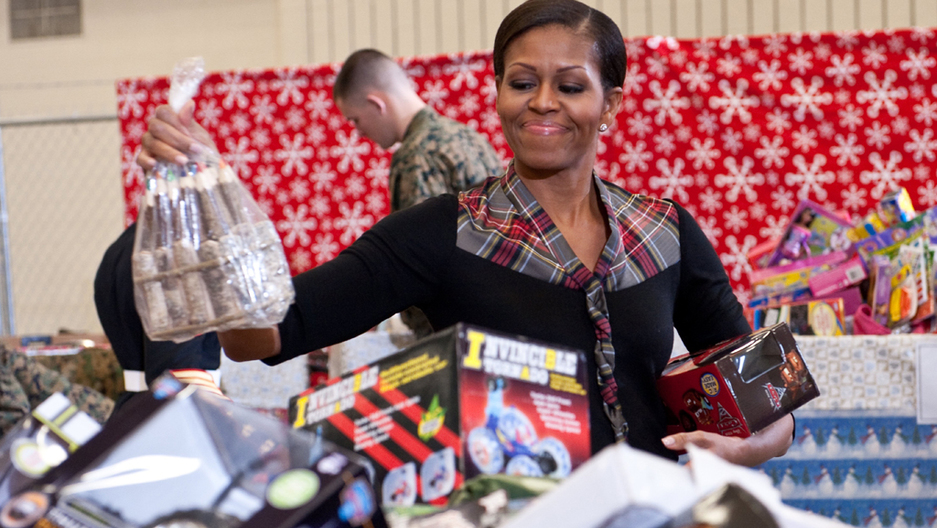 First Lady Michelle Obama was at the Toys for Tots campaign at Joint Base Anacostia-Bolling in Washington, where she was asked by Marine Lance Corporal Aaron Leeks to be his date for the Marine Corps Ball.
Credit: Nicholas Kamm
Share

Asking someone to the prom is nerve wracking enough, but asking the US President's wife takes guts.

Luckily when Marine Lance Corporal Aaron Leeks asked First Lady Michelle Obama on Friday to be his date to the Marine Corps Ball, she said yes.

"Actually, she said I'd need to speak to her husband, too, but she said she'd love to."

Michelle Obama was donating toys and gifts at a Toys for Tots event in Joint Base Anacostia-Bolling, when the 20-year-old soldier from Frederick, Maryland asked her.

According to CNN, Leeks will be deployed for the first time to Afghanistan in January. He will "prepare the bodies of slain troops for return to Dover Air Force Base."

When he returns next year, he plans to attend the ball with Michelle Obama in tow.

Retired Marine General Pete Osman, president and CEO of the Toys for Tots based in Quantico, VA, said the First Lady was their number one volunteer, the AP reported.

"It sends a big signal to the military," Osman said. "When you've got someone like the first lady behind you, how can you go wrong?"