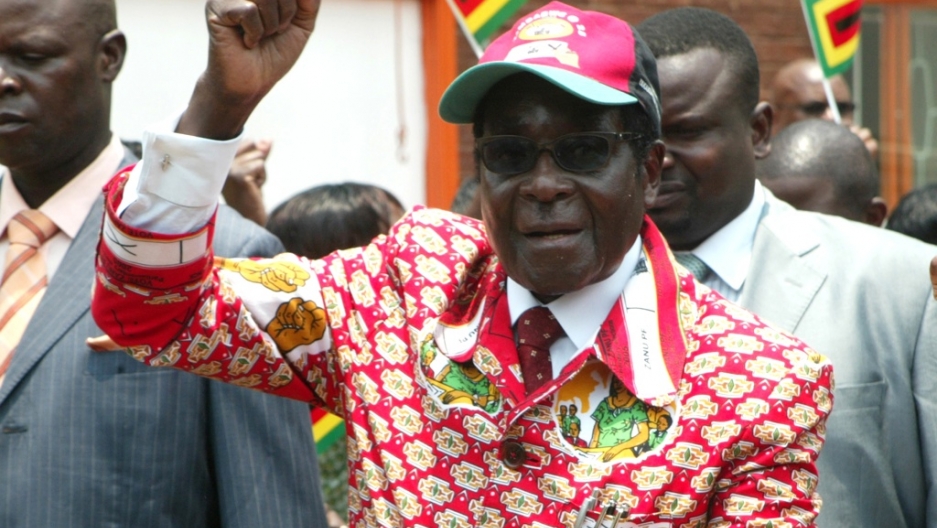 Zimbabwe President and leader of the Zanu-PF party, Robert Mugabe, arrives at the party's 12th National People's Conference in Bulawayo, on December 8, 2011. The yearly conference of President Robert Mugabe's party starts as he pushes for Zimbabwe to hold elections next year and to rally his divided ranks behind his campaign to defeat Prime Minister Morgan Tsvangirai.
Credit: Jekesai Njikizana
Share

HARARE, Zimbabwe — “Pigs and dogs” he called them, and that was just the beginning of President Robert Mugabe’s campaign of abuse of gays.

This year, 16 years after his searing attack, his sentiments about gay people are back in the news.

As Zimbabweans draw up a new constitution, Mugabe’s Zanu-PF party has decided to play its leader’s vitriolic views center stage.

Mugabe last held forth on the topic of homosexuality at the Zimbabwe International Book Fair in 1995. The event was an important diary item in the country’s intellectual life and luminaries such as Nadine Gordimer and Wole Soyinka were in attendance. The theme for the book fair in 1995 was "Freedom of Expression."

When a little-known activist group, Gays and Lesbians of Zimbabwe (Galz), sought the right to attend the function there was strong opposition from the government. As a result Gordimer and others crafted a statement asserting the right of Galz to attend.

Mugabe delivered the opening speech of the book fair and chose the occasion to denounce gay rights in blistering terms. He made the now notorious remarks about gay people being “worse than pigs and dogs” and, without even a nod in the direction of Oscar Wilde’s trial, claimed that next they “would be doing it in the street.”

Mugabe’s remarks represented a watershed for democracy and human rights in Zimbabwe. While rights groups denounced his stance, churches and traditionalists rallied around the president. Mugabe was able to put together a handy coalition ahead of elections in 2000.

But Mugabe's standing abroad plummeted. While he posed as the authentic voice of African nationalism at home, new voices had emerged in the region to challenge his narrow exclusivist discourse. Nelson Mandela, released from prison in 1990, provided an example of constitutional governance in his Rainbow Nation at variance with Mugabe’s state. Gay rights were given specific recognition in South Africa’s new constitution.

More from GlobalPost: Tsvangirai comes out in favor of gay rights

When Mugabe visited South Africa shortly after his "pigs and dogs" speech he was denounced by demonstrators who temporarily prevented him leaving the Johannesburg airport terminal. The South African media was unforgiving with cartoons of Mugabe as Marie Antoinette telling the hungry masses, faces pressed against her palace glass windows, to “go and bash gays.”

The sub-text was lost in the hubbub. Mugabe was asserting his authority in southern Africa, by slapping down the new boy. In 1998 Zimbabwe forces entered the Congo in direct contravention of Mandela’s wishes.

One of the issues at play in the Book Fair speech, missed by many observers, was Mugabe’s disgust at the idea of an independent woman, freed from what Camille Paglia described as the slavery of the reproductive cycle.

“Look what happens when people act outside the guidance of the ruling party,” appeared to be his message.

Now, once again, this almost surreal debate has occupied the attention of Zimbabweans who mostly would prefer a square meal.

Surprisingly what has sparked the latest round was a statement by Prime Minister Morgan Tsvangirai, leader of the Movement for Democratic Change, that gays should have the same rights as other minorities in the new Zimbabwean constitution currently being framed by representatives of the three main parties.

“The right to freedom from discrimination,” Tsvangirai said, “given our history of discrimination and intolerance, must be broad to include the protection of personal preferences, that is gays and lesbians should be protected by the constitution.”

This was of course a gift to Mugabe and his spokesmen.

“You can keep your gay England,” they pronounced. “We will keep our Zimbabwe.”

Bishop Trevor Manhanga, a disciple of the president, declared “the practice of homosexuality is neither human nor right. To equate deviant sexual behaviour with the rights of women and children, minorities and other sectors of humanity who have struggled to be afforded certain inalienable basic human rights is nothing short of diabolical.”

Compounding this heated exchange has been British premier David Cameron’s statement that Britain will not provide aid to states that criminalize gays. This has enabled Tsvangirai’s political opponents to suggest he is doing Britain’s bidding, a recurrent theme in Mugabe’s propaganda. Now US president Barack Obama has also stated that gay rights will be an important factor in determining US foreign aid.

Needless to say the debate is getting messy. MDC members have threatened to name names of closeted gays in Mugabe's party.

Member of parliament Amos Chibaya, referring to the late general and national hero, Solomon Mujuru, pointed out that: “There was no single day Mujuru got lost and started talking about gays, yet in Zanu-PF we have people who continuously preach anti-gay gospels yet they are champions in practicing it.”

No bets are being taken whether gay rights will find their way into Zimbabwe's new constitution.

In the meantime Zimbabweans have 80 percent unemployment to think about and putting food on the table.

More from GlobalPost: Zimbabwe: Forget the US dollar, what about the Chinese yuan?