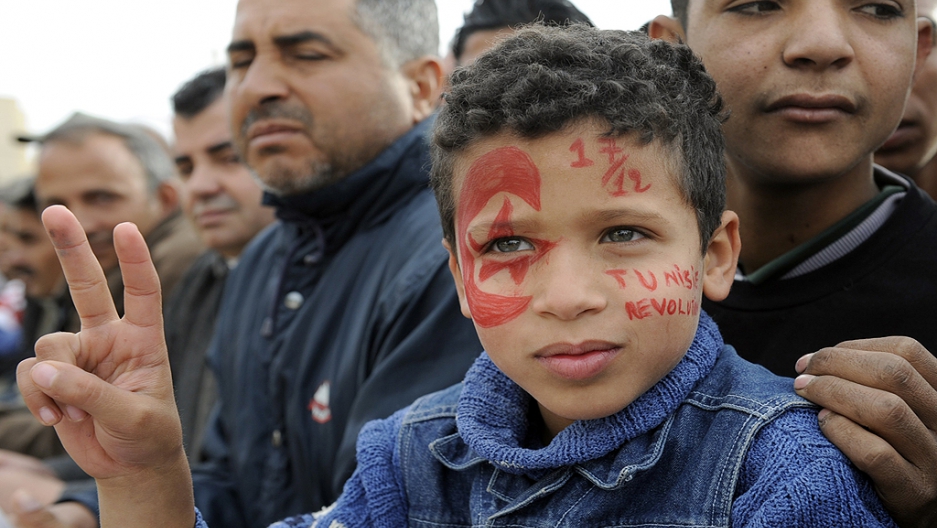 People gather on December 17, 2011 in Sidi Bouzid's Mohamed Bouazizi square, named after the fruitseller whose self-immolation sparked the revolution that ousted a dictator and ignited the Arab Spring. Thousands of Tunisians rallied in celebration of the first anniversary of the popular uprising that toppled their long-standing dictator and unleashed the Arab Spring revolutions.
Credit: FETHI BELAID
Share

Thousands of Tunisians gathered in central city of Sidi Bouzid on Saturday to mark the one-year anniversary of Mohamed Bouazizi, a 26-year-old fruit vendor whose desperate act of protest unleashed a wave of popular anger across Tunisia and the entire Arab world.

Last December 17, Bouazizi lit himself on fire following a scuffle with a female police officer. Bouazizi’s wares were confiscated and he was reportedly slapped by the woman.

Bouazizi, humiliated and hopeless, marched to a nearby municipal office in Sidi Bouzid and lit himself on fire. He died several days later.

More from Sidi Bouzid: The making of a martyr: truth or legend?

But his death sparked widespread discontent on the streets of Tunisia.

AFP reports that Tunisia’s newly-elected president, Moncef Marzouki, a former opposition leader who was forced to live in exile, paid his respects to Bouazizi and the city of Sidi Bouzid on Saturday:

"Thank you to this land, which has been marginalized for centuries, for bringing dignity to the entire Tunisian people," said Marzouki, who was sworn in as president this week after the country's first post-revolution election.

"Our role is to bring back the joy of living which had been stolen by despots," Marzouki said.

Bouazizi's desperate act of protest was an inspiration to anti-government protesters across the entire region, from Tahrir Square to Tripoli.

More from GlobalPost: Tunisia votes for first time, peacefully and in huge numbers

Reuters reports on how Bouazizi served as a "fuse" for the Arab Spring:

Tunisia's revolution inspired other Arabs to rise up against entrenched authoritarian rulers. They were overthrown in Egypt and Libya. Yemen's leader has stepped aside for a reformist transition while Syria's president faces a spreading insurgency.

Since Ben Ali's departure on January 14, Tunisia has slowly transitioned into a democratic nation.  The country recently swore in a new president, and elections for a constituent assembly held in October were peaceful and reportedly free and fair.  Voter turnout was reported to be as high as 70 percent.

But the path to change in Tunisia has not always been smooth.

More from GlobalPost: Tunisia: is the revolution over yet?

The economy suffered heavy losses in the weeks and months of political upheaval that followed Ben Ali's ouster.  Tourists and investers fled the country as police officers - the target of much public anger last year - vacated their posts, leaving a precarious security situation in the tiny nation.  Some believe the economy could take up to 5 years to recover.

Amnesty International also reports that “many Tunisians say their demands for justice have yet to be fulfilled” one year later.

In Tunisia more than 234 people were killed when security forces brutally crushed the protests that continued until President Zine el Abidine Ben Ali fled the country on 14 January. A further 74 prisoners were reportedly killed in incidents related to the uprising.

But many Tunisians say the interim governments failed to respond to their calls for justice for those killed and injured and did not do enough to improve living conditions.

Even in the hills of central Tunisia, where Bouazizi lived, change has come slowly.

“People of Sidi Bouzid are marginalized. Some of us are farmers, the others are smugglers. If we go to Libya we might be killed. If we complain here, they dismiss us,” one Sidi Bouzid resident told Al-Jazeera.

“Nothing has been achieved. No roads were built, no running water, no factories, no job opportunities,” he said.