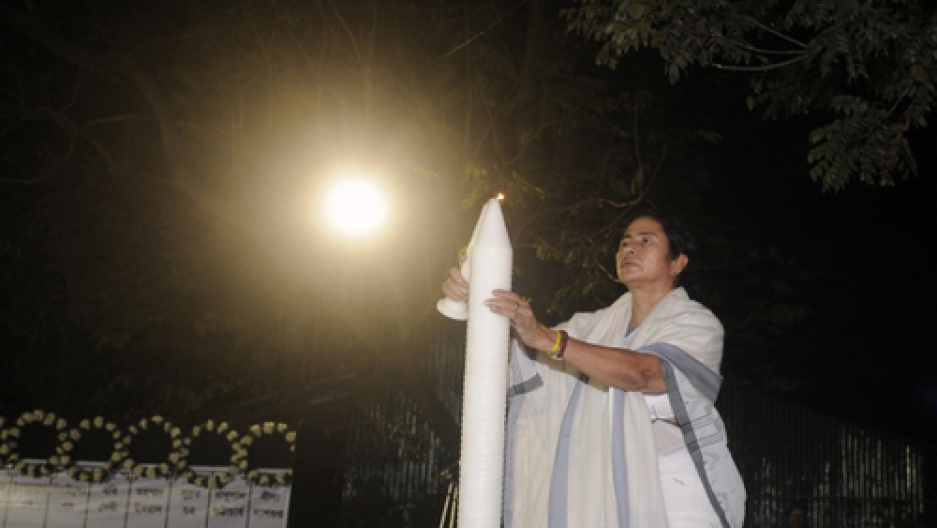 The chief minister of the state of West Bengal, Mamata Banerjee, hods a candle as she pay her respects to the people who lost their lives in the recent fire at the Advanced Medicare And Research Institute (AMRI) hospital in Kolkata, on December 12, 2011. Nearly 90 people were killed when a fire engulfed patients at a hospital on December 9 in the eastern Indian city of Kolkata, with officials accusing senior staff of abandoning those in their care.
Credit: DIBYANGSHU SARKAR
Share

Editor's note: On Friday, December 9th, GlobalPost held a workshop along with the Nieman Foundation and the Kaiser Media Fellowships Foundation to analyze the intersection of policy and journalism in global health.  During the workshop, the Nieman Foundation's Special Projects Director, Stephanie Friedhoff raised a very pertinent question: Why do we need better reporting from the frontlines of global health?

This is Kalpana Jain's response.

For long years, I have covered health not just as a medical story but as an economic story, a political story, a foreign policy story or simply, as a human interest story. I once came across a young woman whose children were very sick with measles. Back in her village, her buffalo, the source of her livelihood, was critically ill too. She had a difficult choice to make – to sell her assets in getting hospital care for her two children or take the buffalo to the vet. She chose to take care of the buffalo.

Both her children died of an infection that could have been cured. Between her sobs, the woman explained: had she spent her savings on her two children, the buffalo would not have survived. The buffalo was the only source of livelihood for her remaining family of four children. This is a story not just about health systems, but about political apathy; about poverty and about inequality.

And that is the way I have tried to bring health stories to my readers --- the challenge has always been how to use a story to convey a bigger concern and a bigger story. It was interesting to note that New York Times found it relevant to cover a fire in a hospital in Kolkata on December 8, when it may choose to ignore various other political developments in India. Perhaps, in context of globalization and a rapidly growing segment of medical tourism, it makes more sense to cover this story which reveals the poor state of regulations in hospitals in India.

Again, epidemics are not simply about resurgence of a disease – each epidemic conveys something more about a whole system. For instance, an epidemic of cerebral malaria in parts of India many years ago, was related to a new irrigation system that was brought in without adequate consideration of local conditions, which subsequently led to the breeding of the vector; the resurgence of plague in India was related to an earthquake that upset a rodent population but went unnoticed in the absence of a vigilant surveillance system. And the spread of HIV, as we know, is strongly linked to poverty and gender issues.

Yes, I do agree that the HIV epidemic perhaps got the most attention in the media and it may have helped divert a lot of funding to it. But I also recall HIV as having created the space for the first time for truly global health reporting. The attention that was initially given to HIV eventually created the space to talk about various other relevant global health issues.

At the same time, processes of neoliberalization and globalization have changed the world in ways that are hard to capture through simple stories. Emerging markets such as India and China are providing cheap human subjects for the expensive drug research. There may be a real opportunity to exercise a watchdog role to ensure the poor are not used as guinea pigs for testing of drugs.

Reporting on these issues can be enormously challenging and it is often the individual reporter’s persistence that gets a story through. No editor would want a daily cocktail of bleak and depressing news for their readership. The challenge often is about presenting the same facts in ways that invites readers in, instead of putting them off. The other challenge is truly for the reporter who needs to deal with the emotional stress of covering these stories and allowing the images to sit in her mind. In addition, the pharmaceutical industry and its multiple nexus can form a very powerful force to deter an intrepid reporter.

Finally, what many may not realize is how health reporting can, at times, be as dangerous as war-zone reporting, or worse. When reporting on infectious diseases, you not only risk infecting your own self with some deadly, perhaps incurable pathogens, but also your loved ones. I still recall covering plague in India when my son was barely two-year-old. When he came down with a deadly infection a week later and doctors suspected plague, I struggled with the commitment to my work but also my responsibility as a mother.

Being a Nieman global health fellow has introduced me to a community of global health journalists, whose support is so crucial to the work we all do. Often, global health reporting is a challenging, emotionally exhausting journey. And the support of a like-minded community can be so valuable.