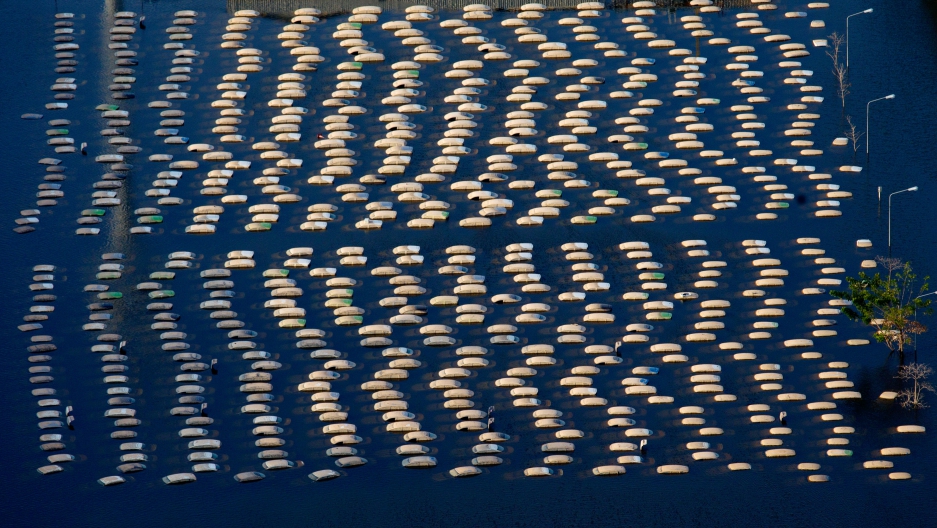 Honda vehicles are seen in an aerial photo at the flooded Honda factory in the Rojuna Industrial district November 14, 2011 in Ayutthaya, Thailand.
Credit: Paula Bronstein
Share

BANGKOK, Thailand — The 600-plus dead have been cremated and most neighborhoods, deluged by filth-laden floodwaters for weeks, are now scrubbed clean.

But the global electronics sector is still reeling from Thailand’s floods, the worst to hit the nation in 50 years. As the last floodwaters recede, the crisis is exposing just how heavily the world’s tech sector leans on a drab industrial zone in a floodplain north of Bangkok.

If certain PCs, hard drives or other electronics are suddenly more expensive or backordered in your city, chances are their production relies on Thai factories recovering from neck-high floods. The pungent waters, which shut down more than 800 factories employing roughly 450,000 workers, are now struggling to repair or replace equipment left soaking for weeks.

More: Will Thailand move its capital?

Fixing all that highly specialized equipment will take months. The supply shortage and resultant price hikes, according to analysts, could last well into next year.

For investors, this is a frightful realization: floods can wipe out an industrial sector that stands as a pillar of Thailand’s export-driven economy and a crucial link in the global supply chain.

Hana is Thailand’s largest maker of semiconductors, used in mobile phones and tablet computers, and it’s located in one of the many industrial parks recently submerged by heavy flooding. As dykes around his complex burst, Han and his counterparts evacuated their pricey machinery on Thai navy boats deployed to save drowning factories.

California-based Western Digital, the world’s largest maker of hard disk drives, took an even harsher beating. While not quite a household name, the firm supplies many firms that are: Dell, Intel, Apple and others. Roughly 30 percent of all the world’s disk drives are made in Thailand, where cheap-but-skilled labor and tax breaks have attracted foreign-owned factories to the industrialized provinces north of Bangkok.

About 60 percent of Western Digital’s hard drives are made in Thailand, according to the firm, and all of its six factories were affected by flooding. When their production suddenly stopped, a global shortage ensued. Some Western Digital hard drives shot up as much as 80 percent and prices remain inflated.

Only this month did the company manage to haul undamaged equipment into a single factory, churn out hard drives and announce production had resumed.

The company may suffer up to $275 million in costs, according to public statements, which forecast supply constraints continuing into “the March quarter and beyond.” Another tech giant, Intel, has cautioned that its fourth quarter revenue will miss its own target by roughly $1 billion, a shortfall it connects to a supply chain shake-up caused by the Thai floods.

But walling off industrial zones, Han said, will only turn these complexes into little islands if floods return. The outside waters will prevent supplies and workers from entering and stop factories’ finished products from exiting.

“Companies are not going to put all their eggs back in the same basket,” Han said. “No matter what kind of wall you have.”

According to an economist and visiting professor at Bangkok’s Chulalongkorn University, Sethaput Suthiwart-Narueput, there is good news: “Economies hit by natural disasters tend to recover relatively quickly,” he said. “Much more than if they get hit with something like a banking crisis.”

Last year, investors were rattled by anti-establishment street protests ending in a violent army crackdown, 91 deaths (mostly of protesters) and an arson spree in a Bangkok commercial district. In 2009, projects at an industrial estate called Map Tha Put were halted under suspicions of severe pollution. And in 2008, a nationalist mob sieged and shut down Bangkok’s chief airport, shuddering the economy.

More: A dry spell for beer in flooded Thailand

The economy, Sethaput said, has suffered from “our masochistic ability to inflict harm upon ourselves ... all of which, compounded by the flood, has contributed to, shall we say, a less than conducive atmosphere for investment.”

So far, only two foreign companies have moved out of Thailand since the flooding began, said Atchaka Brimble, secretary-general of Thailand’s Board of Investment. But she concedes that the crisis has put Thailand on the defensive, especially as regional rivals such as Malaysia and Vietnam are more aggressively courting foreign investment.

“We’re trying to convince investors,” she said, “that Thailand is still the prime investment location in Southeast Asia.”