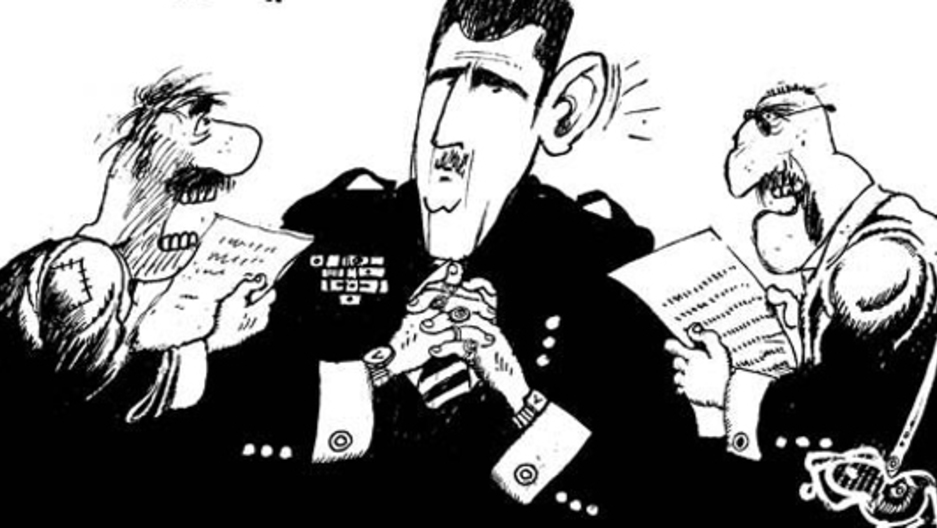 A cartoon by Ali Ferzat.

Share
When Barbara Walters interviewed Syrian president Bashar al-Assad last week, she mentioned some gruesome examples of how his regime was suppressing its opponents. One was the case of Syrian political cartoonist, Ali Ferzat, who was found beaten and bloody on a road outside of Damascus in late August. Nearly four months on, Ferzat is still recuperating. These days he is in Kuwait getting medical help and physical therapy. He remembers how his car was stopped in a square in Damascus late on the night of August 25th. "The car that stopped me seemed like it was a security car because it had tinted windows," Ferzat said in a phone interview. "Three big strong men got out of the car carrying police batons, the kind they use to control protesters." They broke off his car door and started beating him inside his car. Then they pulled Ferzat into their car and continued beating him while they drove around Damascus. "They put a plastic bag over my head so I couldn't see anything and they told me, 'This is so you won't draw against your masters and against your president.'" The beating lasted forty-five minutes. Afterward the men threw him out of the car while it was still moving, leaving him on the airport road several miles outside of Damascus. He needed to get a ride back to Damascus but he was left on the lane heading to the airport so he first had to crawl across the median strip so he would be on the road heading back into the city. Then came the challenge of getting a car actually stop to help him. "No one dared to stop because of how I looked," Ferzat said. "I was all bloody, my face was swollen, my eyes were bruised, my shirt was off. I was barefoot. No one would stop to pick me up." Finally a pickup truck pulled over to fix a flat tire. The driver gave Ali Ferzat a ride back to Damascus, using side roads to avoid security checkpoints. The security guard at his apartment building took him to the hospital. These days, his hands and fingers are still not strong enough to draw, but Ferzat is not worried. "As soon as I finish treatment and my hands heal, I will go back to Syria and of course I will keep drawing these cartoons." Ferzat is 60 and he has been drawing political cartoons since college. He spent about thirty years as a cartoonist for government-run newspapers during the rule of Bashar's father, Hafez al Assad, a guy not exactly known for championing free expression. Ferzat said during those years, his work was censored, on a regular basis. "Sometimes we used to just print the newspaper with white blocks and readers would understand that these blocks were for cartoons that had been censored and forbidden." Ferzat's cartoons never used to depict Syrian leaders literally. Instead he used symbols, like a chair, to represent power. There are lots of chairs in Ferzat's cartoons. But after the uprising began in Syria last March, Ferzat felt he had to be more direct. "People used to have more time to think about the symbols I was using," said Ferzat "But now, with people out in the streets demonstrating and being killed for what they're doing, I think directness and clarity is needed so people can see who is responsible for it." So in April, Bashar al-Assad the man started appearing in Ferzat's cartoons. In one of them he's looking at a calendar realizing with dread that the next day is Friday, a day when he can expect yet another demonstration. A June cartoon shows Assad at a podium making a speech, with a man hiding in the front of the podium instructing the crowd when to clap. One of Ferzat's last cartoons, published just three days before he was attacked, shows Assad hitching a ride with Libya's Muammar Gaddafi. Ferzat actually knows Bashar al-Assad. In the late 1990s, Bashar was preparing to succeed his ailing father, Hafez al-Assad. The younger Assad started meeting with Syrian artists, including Ali Ferzat, asking their opinions on how to improve things in Syria. "In the beginning of Bashar's rise to power, he had a whole project of reform: freedom of speech, all those things, and part of that was the start of a free press," Ferzat said. When his father died in 2000, Bashar took over and allowed Ferzat to start a satirical magazine, al-Domari, meaning "The Lamplighter." For the first two months Ferzat had total creative freedom. Then the censorship kicked in. Eventually the Syrian government took over distribution, which effectively gave them the power not to distribute the magazine. In 2002, his magazine was shut down for good. But it hardly muzzled Ferzat. By then he was publishing his cartoons on the Web and getting a larger audience. That's where the Syrian government saw them, too, of course, but that's also where the rest of the world saw photos of a bruised and battered Ferzat after the August 25th attack. An international outcry followed. The European Parliament awarded him the Sakharov prize for freedom of expression. It's been followed by other honors. Ferzat said he has no plans to abandon cartooning. "I don't have a shop or a market so I can't easily change my profession. Cartooning is my destiny. I think this is a gift from God. And this is a human message that I have to convey." And besides, he added, "Freedom is more powerful than any weapon."