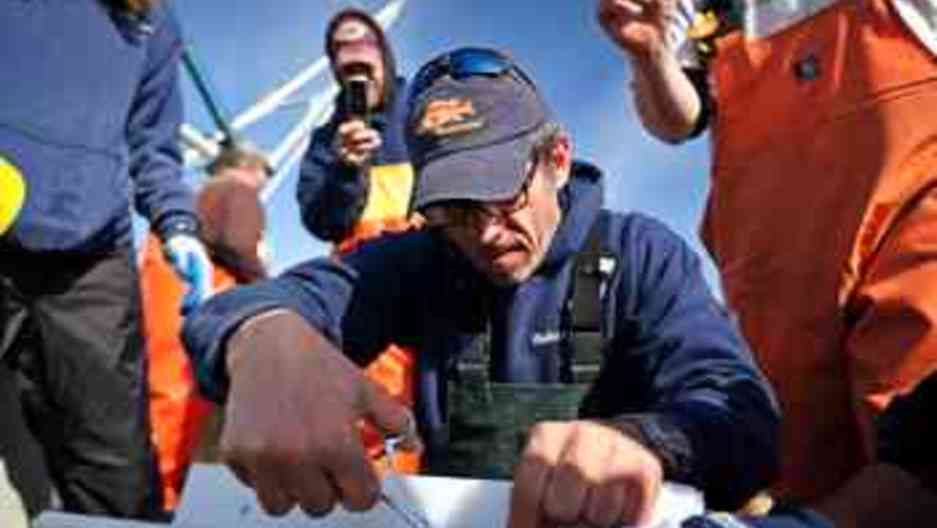 Time is critical when implanting radio tags in fish, so Tom Calvanese works quickly to minimize the time they're out of the water. (Photo by Jason Albert.)

Off the coast of Oregon, marine wildlife are about to get some extra protections.

Starting in 2012, just south of Port Orford, Oregon, the state is creating its first marine sanctuary. And they're doing it with the support of both fishermen and conservationists.

Tom Calvanese, a biologist and Oregon State University graduate student, studies the nearly 40 rockfish species that live along the Oregon coast. They're popular to look at because of their menacing spines and vibrant colors, but they're also popular for eating. The rockfish are an important reason the new fishery is being created.

On a boat with other scientists, Calvanese organized his notes and pointed beneath the surface of the water.

"There’s actually an acoustic array set up to look at fish movement patterns in relationship to reserve boundaries," he said.

It can only track fish he's tagged, but the hope is to tag even more fish as time goes on.

"We need to understand more about how fish use space, where they go, how much time they spend there, what type of habitats they’re likely to be found in," he said. We’re starting to do more place-based management."

The goal is to understand how much space a thriving rockfish population needs. The new reserve, Redfish Rocks, is the perfect 2.5 square miles for him to study. The waters here are loaded with fish and once the reserve is established next year, fishing will be off-limits.

Jeff Miles, a commercial fisherman, said that areas if filled with not just rockfish, but all kinds of fish.

"You know, it’s a very unique area in here because you get all the species: the Chinas, coppers, quills, lingcod, canaries, yellow eye, halibut. God, you name it, we’ve caught it all here," he said.

But Miles, who was piloting to boat the Calvanese was using, said it hasn't always been so cooperative between the biologists and the fishermen.

"The thought of a marine reserve - to have your fishing grounds taken away," Miles said. "You know, and my first instinct was just to run and hide from it. The biggest thing is, people don’t want to lose their ability to make money."

Miles said that once fishing is banned, commercial fishermen will lose 10 to 15 percent of their income.

"How many people are going to voluntarily take 10 percent out of their paycheck," Mile said.

But there's a reality here. Miles has seen overfishing deplete rockfish populations along the Oregon coast. That's where Calvanese and other biologists come in, and why there's a partnership among them.

"I like the tagging part here. I’ve always wanted to know what fish do and where they live and how they move and I think it’s cool," Miles said. "That’s why I’m trying to donate the time and get this done. And, I realize that you just can’t keep hammering on them. They’ve gotta have some places where they can live to survive."

Calvanese said the help of fisherman like Miles is priceless.

"Jeff Miles is making my research possible. We have species we’re targeting for this research, and they’re not the most commonly encountered species. So in order to capture enough of them to do the research, I need to find them," he said. "I’m in awe of someone who’s got that kind of knowledge just from having lived it."

The goal is to eventually be able to track a fish from where it's tagged throughout its life until it is finally caught, and then get an idea of its life pattern.

The headline on a previous version of this story incorrectly stated what was being created off the coast of Oregon. It is a Marine reserve.